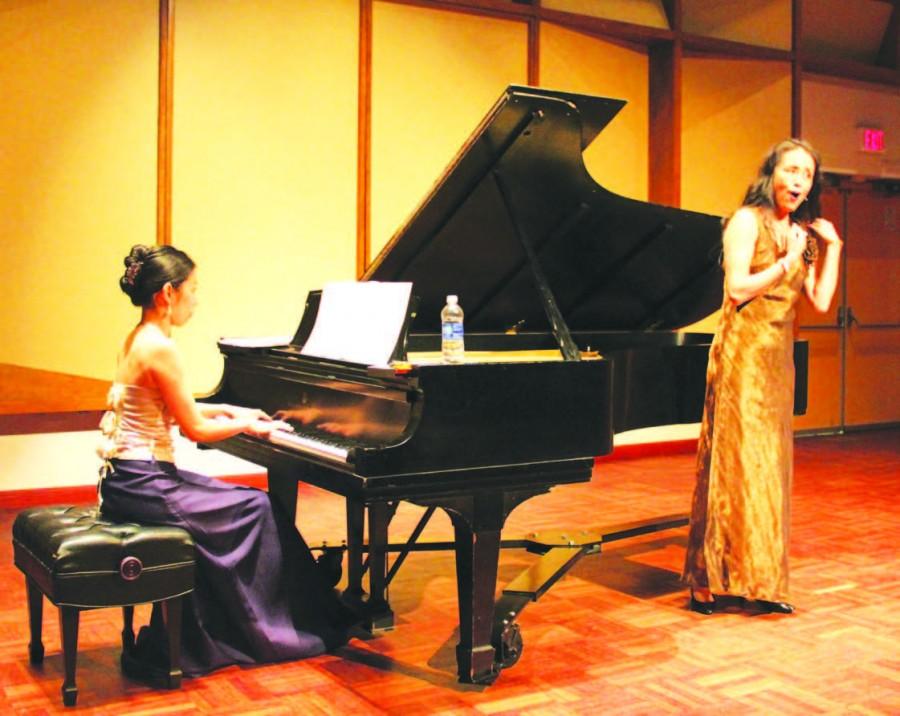 umire Worman and Xin Jie perform a multicultural program that gives an idea of what music is like from different countries.

Jie described their collaboration as getting to travel around the world and taste many different cultures. The range of pieces that they chose to perform exemplified this. They began with German songs and then transitioned into French.

Wormire performed two piano solos from her home country, Japan. The first of these, “Chiisai Aki Mitsuketa,” is translated as “I Found a Little Autumn.” She chose this song because it reminded her of her childhood.

In her description of the second Japanese song, “Hakone Hachiri No Hanjirou,” Worman said that Hakone is a place near the highest mountain in Japan. She told the audience that the song is about how a person named Hanjirou has a tough journey but handles it positively.

“These differ from western music,” she said, “because they have no half notes or use the pitches of fa and ti.”

Jie studied western music in college and it is a part of her. Jie said China will always be a part of her as well, and she wants to share her culture with others.

Jie and Worman were introduced to each other by a professor at FMU and have wanted to perform together for a while. Worman chose to hold the performance at the university because she wanted to give the students something useful and of value.

“I want to help them experience something new.” Worman said.

Jie has a master’s degree in voice performance. She has performed in the U.S., Asia and Europe. Jie has also performed songs in seven languages. She currently travels around the globe performing opera.

Worman was born in Tokyo, Japan. She began playing piano when she was 3-years-old but said she began to get serious about playing at about age 14.

According to Worman, her passion for piano was not a sudden development.

“My love for music developed because the more I studied music the more I realized how much there is to learn,” Worman said. “I’m still learning even after decades of studying. Music is so deep; there is so much to it, and that excites me.”

Worman also said one of the things she loves about piano is it is not merely about the technical concerns, but about the emotion of the music. She loves performing because she gets to share the emotions music gives her with the audience.

She has obtained a master’s degree in music in piano performance and currently lives in South Carolina.

Worman is a member of the faculty of FMU as an adjunct professor of music. She also plays piano in the Florence Symphony Orchestra.

The fine arts department of FMU offers many events throughout the semester. One of their upcoming events is the Halloween Concert by the FMU Concert Band. It will be held at the Performing Arts Center at 7:30 pm on Oct. 27. Students are invited to come in costume. People can reserve tickets at 843- 661-4444.