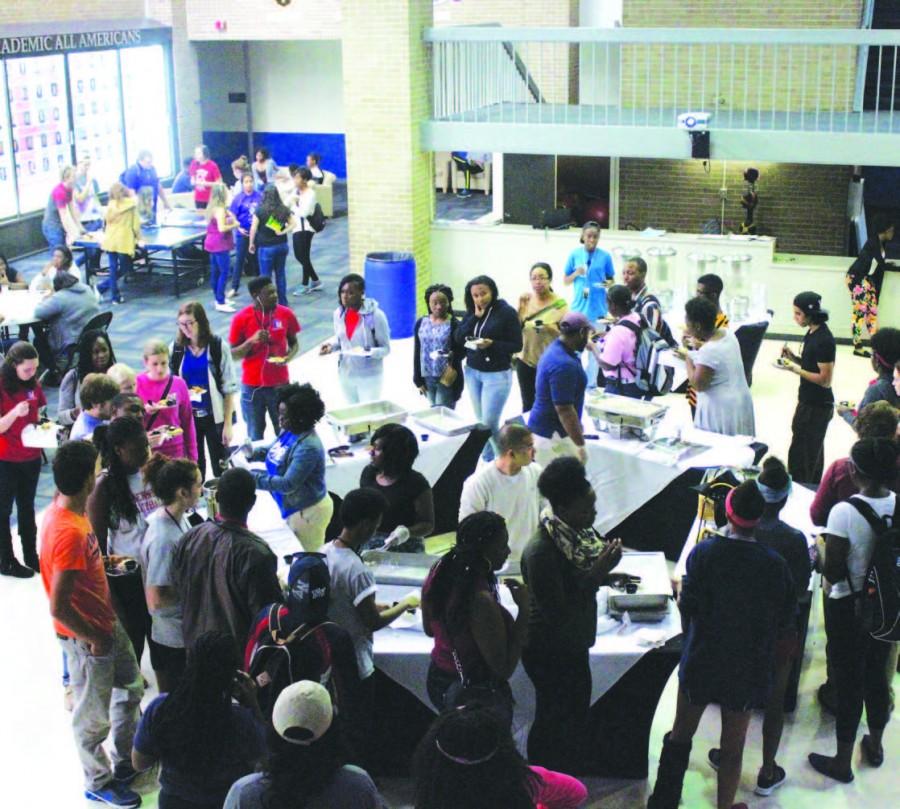 Members from various organizations serve students a taste of different cultures on Oct. 15.

FMU held its annual Cultural Food Festival on Thursday, Oct. 15 in the Smith University Center Commons (UC) where students gathered from 2-4 p.m. to enjoy dishes from all over the world.

a variety of cultures were featured at the festival this year. The purpose of the event was to expose students to foods from multiple cultures and help students learn more about the countries these foods are connected with.

Max Reyes-Rosario, co- advisor of MAB, began the event with a greeting and introduction. He reiterated that MAB’s goal to expose students to different cultures.

Members of the sponsoring organizations presented the name, place of origin and description of each of the six foods served. They also briefly touched on the cultural significance of the foods. The foods from places all over the world: areas of Asia, as well as Hawaii, Italy, Jamaica and France.

MAB chair, Shenika Glover, closed the speaking portion of the event by thanking the people who helped sponsor and plan the event and the participants.

Students hurried to the tables to taste the multicultural cuisines such as soup and rice to empanadas to desserts such as crème brûlée. FMU’s catering service, Aramark, prepared the food for the event.

Glover described the extensive planning process that the sponsoring organizations went through to hold this event. The organizations had to plan a time that they would all be available to plan the dishes. After that stage, they worked with Public Affairs to make flyers and advertise the significance of the event.

McKayla Parker, a senior English major, said she thought the food was fantastic and better than she expected.

Students came to the event for various reasons. Parker said she attended this event because it was mentioned in her Spanish class as an extra credit opportunity, and it seemed fascinating.

“I came to the festival because I think it is interesting to learn about different cultural foods,” Bre McKenzie, a senior biology major, said

Assistant Dean of Students Dr. Daphne Carter- McCants, said this event, which has been held for six years, has drawn a crowd of 230-260 students in the past but drew 317 students this year. She was excited about the increase in participation and credited it to more promotion of the event among multiple departments.

“The exposure of different international dishes helps students to better identify with cultural diversity,” Carter- McCants said. “Despite our cultural differences, human necessities, such as food, may help to bring us closer together.”

According to Glover, the festival was an undeniable accomplishment. She said students expressed to her that they were pleased by the event because they would not have experienced the cuisine in their daily lives. She said the event not only met the goals of the MAB but also surpassed them.

Caitlin Erb, a junior biology major, said she was especially impressed with the rice dish. She also said she thought about different cultures while she was there.

“Many cultures, not just the ones included in this festival, use rice as a staple in their dishes,” Erb said. “This event was supposed to help us appreciate differences in cultures, but it also showed me that there are similarities in cultures as well. We all have things that connect us as well as the things that set us apart.”

Erb said she is interested in attending again next year.

MAB’s purpose, according to their page on FMU’s website, is to create diverse learning experiences through cultural programming at FMU.

Any member of the FMU community who is interested in expanding their cultural understanding can join MAB.