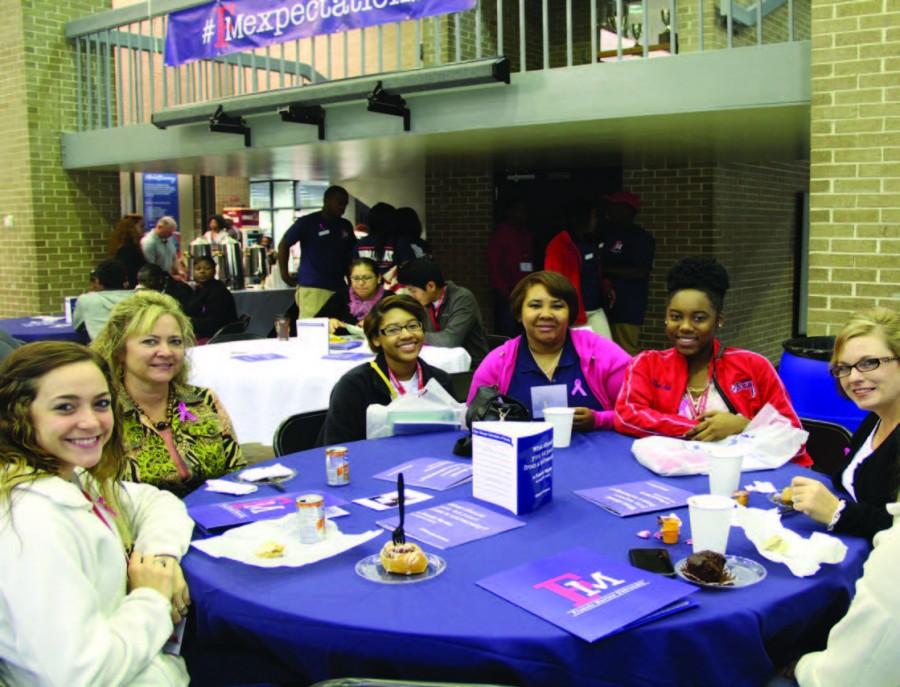 Prospective students and their families shared breakfast while socializing and learning about programs offered by the university.

On Oct. 17 FMU hosted an Open House in the Smith University Center (UC).

One hundred fifty families registered and came to see the campus and to learn more about what FMU had to offer to students. Open House is designed to make interested students feel more at home as they learn about the university and programs that it offers.

As prospective students and their families ate breakfast and met FMU Diplomats, there were tables on the opposite side of the room, giving information about athletics, financial assistance, admissions and other important aspects of the university. FMU admissions counselor Shanae Giles said that she wanted those who are interested and attend Open House to say to themselves, “This is where I belong.”

Junior elementary education major Alexus Franklin said her favorite thing about being able to be part of Open House was knowing that she and the other Diplomats were the face of the school. She enjoyed meeting new people and her goal was to get people to join the FMU family.

Jon Tuttle, English professor and director of the honors program, also attended the Open House. Tuttle said it was the great vibe, great people and a great environment that seemed to appeal to a lot of interested students.

Many families agreed that FMU has a beautiful campus. An interested student, Katelyn Rogers, who wants to study psychiatric assistance, said that one of the reasons she would like to attend FMU is because of the beautiful campus and because of the notable nursing program. Another interested student, Nancy Hammond, who wants to study pharmacy, said the one thing she likes about FMU is the student-teacher ratio of 15 to 1. She thought that teachers at FMU could pay better attention to her since many of the classrooms are not as big and many of the classes only have 20 students.

Hammond’s mother graduated from FMU in the 80s receiving a bachelor’s in sociology. She said that it would be very convenient for her daughter to attend FMU because it is close enough to home but far enough to get the college experience.

After check-in and breakfast, the families went to the Chapman Auditorium in the McNair Science Building, where the FMU’s president, Dr. Fred Carter, welcomed them. Joining him in the welcome was FMU’s provost Dr. Richard Chapman and director of marketing Anna Todd. Following the welcome, the Diplomats showed families to different classroom sessions, giving an academic overview according to their major. Following these sessions were informational seminars that went into detail about housing, academics, financial aid and other programs. The seminar on financial aid was one of the more popular sessions attended. Families had the option to be taken on group tours by the Diplomats after seminars, or they could go straight to lunch in the dining hall.