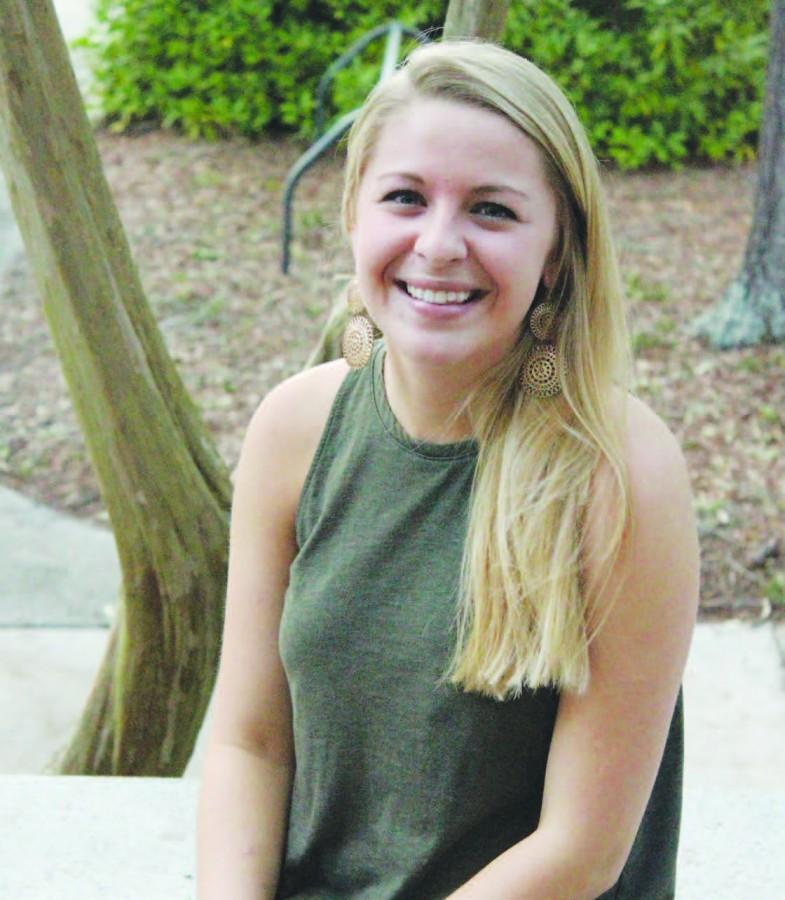 Coming home from work on May 20, 2015, Grayson Hucks did not expect her life to be changed forever.

Hucks was driving home in the rain from her job at the Beach Urgent Care when another driver lost control of his car while driving 80 mph. He crossed into the median, causing Hucks and four other cars to collide.

Before the accident, Hucks was an active member of the Alpha Delta Pi sorority (ADPi) and College Republicans while working during the summer as a medical assistant at Beach Urgent Care. She was accepted to the FMU nursing program for fall 2015.

Upon arriving at the scene, highway patrolmen pronounced Hucks dead.

“In a way, I feel like I cheated death, but it definitely has encouraged me to make this life count,” Hucks said.

Hucks was the onlyindividual injured in the accident. She was unconscious for the first week after the accident, and she suffered a broken sacrum, kneecap and tibia, as well as a moderate traumatic brain injury.

“They actually didn’t know my knee was broken,” Hucks said. “They only thing they found originally was my arm.”

Doctors had to restruct her kneecap by cutting through her quadriceps and putting a metal implant in her leg.

Hucks received treatment in the trauma center at the Grand Strand Regional Medical Center for her bone injuries and then transferred to the Shepard Center for Brain and Spine injuries in Atlanta for her brain injury.

Between her family, boyfriend and sorority sisters, Hucks has had a strong support system throughout her accident and recovery.

Hucks said her biggest encouragement was her mom.

“Although the accident was a very traumatic event for her as well, I can’t imagine how she dealt with everything,” Hucks said. “She was always reassuring that I would make it through the pain, and that God would not have let this happen to me if there wasn’t a greater purpose.”

While in the hospital, sorority chapters from across the nation showed support by sending Hucks flowers and encouraging letters.

After being released from the hospital, she went through orthopedic and physical therapy for a month, and she is currently seeing a neuropsychologist for cognitive testing.

Doctors expected Hucks to walk with a limp for the rest of her life and have severe cognitive impairments, but within three months, she is walking and talking almost like nothing happened.

The rest of Hucks’ recovery process depends on time and waiting for healing in her brain to take place.

Despite her injuries, Hucks still has hopes to come back to FMU in spring 2016 and complete the nursing program.

“Being out of school has been the hardest thing to be patient with,” Hucks said. “I [cannot] wait to become a nurse and be there for patients like they were there for me in the hospital.”

While Hucks is waiting for her doctor’s approval to return to classes, she is remaining optimistic about her situation and working at a men’s clothing shop in Myrtle Beach and as a secretary for her aunt’s business.

“I can’t even begin to explain how the accident has helped me grow as a person,” Hucks said. “I’m actually thankful for it. I was always the girl with a plan and schedule and always in a hurry. Now I’m aware that I’m not the one in control. It’s all in God’s time.”

Doctors will give Hucks the final approval to return to classes in November upon getting positive results from her cognitive testing. Although Hucks has taken a detour from her plans, she still has hopes of becoming a nurse practictioner after graduating from FMU.