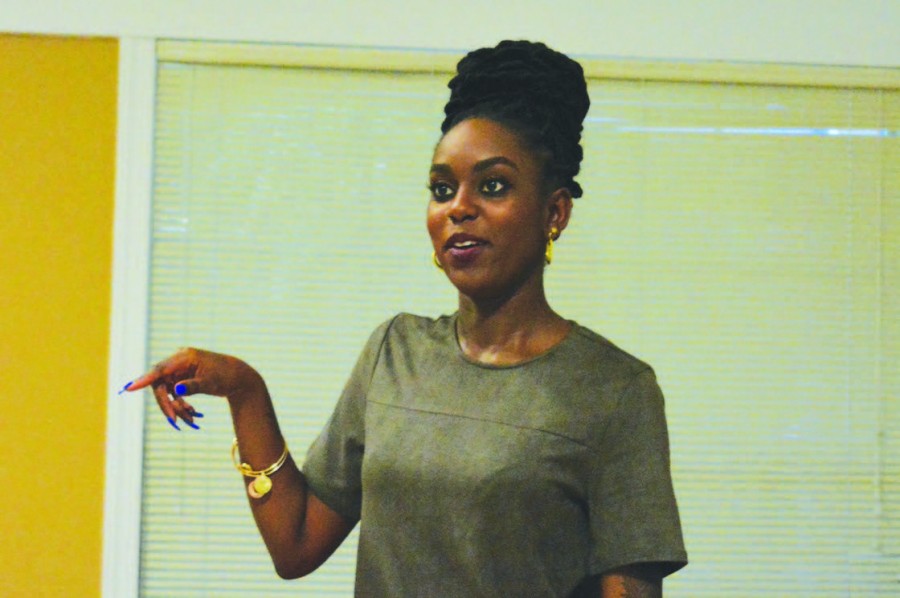 The Xi Chapter of Sigma Gamma Rho held “Girls Rhock” in the Heyward Community Center where they served refreshments, played icebreaker games and listened to Jarrell Yvonne’s story of how she turned her passion into a career.

Sigma Gamma Rho invited Yvonne to speak at the event on Oct. 1 about her success in the nail industry and how women can use their passions to create their own careers. Yvonne is a 23-year- old professional nail artist who recently opened her own salon, Pinky Promise.

“[We] hope the girls will leave with hope to see everything through,” Alexis Heirwegh, President of Sigma Gamma Rho and senior nursing student said. “At this time of the semester, things can be stressful, and as college students we need inspiration to continue on.”

During her talk, Yvonne said she began doing nails when she was in sixth grade, and by 10th grade, she was enrolled in Wilson High School’s cosmetology program. After graduating from Wilson, Yvonne started using her cosmetology license to find part-time work in spas and salons while attending Florence Darlington Technical College. A year and a half after beginning college, she started to do well and began working full-time at a salon while going to school and submitting her nail art to different magazines and competitions around the country.

“If I want six figures tomorrow, I’m going to figure out how to do that tonight,” Yvonne said in regards to her work ethic.

While she was going to school and working, customers asked her what her plans were. Each time Yvonne told them about her plans to become a guidance counselor, and the customers would smile and go on about their business. Once she quit school to pursue her passion of nail art, Yvonne was shocked by how much criticism she received when customers learned that she had given up school to follow her passion. Yvonne said that she quickly realized that people wanted her to do what they thought was acceptable, not what made her happy.

During her time in Atlanta, her pastor asked the congregation two questions: “Did you realize that you serve someone that provides you with everything?” and “What would you do if you knew that you could not fail?”

After hearing that, Yvonne said she knew she needed move back home to open her own nail salon. Pinky Promise is has now been open for 10 months, and sometimes customers have to call three or four months in advance to make an appointment.

Yvonne talked about how important it is that women encourage each other to follow their passions and push themselves to be the best they can be.

“We as women must empower each other [because] we’re only as strong as we are united,” Yvonne said. “In this time period we have the gift of being able to create our own jobs. Find what you love and do that. It doesn’t matter what it is.”