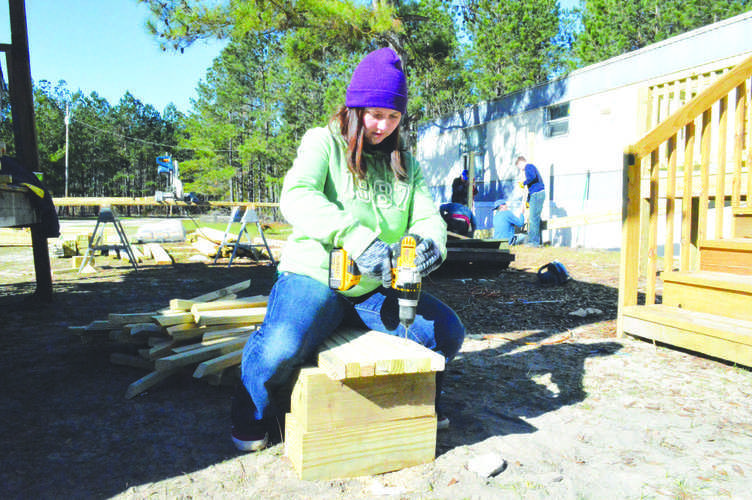 Sophomore Taylor Byrd drills holes in pickets for the railing of a porch being built for a homeowner affected by the October flooding.

During the last week of winter break, FMU students who are a part of BCM traveled to Hemingway and Johnsonville to assist families in the Neck community who lost homes during the flood in October 2015.

Students were housed at a local church in Hemingway and traveled to seven different worksites in the area to complete rebuild work. Teams built decks, porches and ramps for mobile homes, fixed roofs and cleaned up debris left over from the flood.

Students from four different colleges participated in the disaster relief trip including two other universities from South Carolina, the University of South Carolina (USC) and Winthrop University, and one from Williamsburg, Va., the College of William and Mary.

The FMU BCM has participated in disaster relief operations in the past, but this trip was a new experience for FMU campus minister Kendal Danford.

“This was the first disaster relief trip we have done in our state,” Danford said. “A lot of students were from the area, so there was a personal connection to the work being done.”

In addition to being close to home, the type of work being done was different from other disaster relief trips. Danford said disaster relief trips typically consist of mudding out homes or tearing out the houses after the water cleared out. This was the first trip spent helping homeowners rebuild after a natural disaster.

“We’ve never done rebuild before,” Danford said. “It takes a little more skill to complete. The amount of people and time it takes is more than mudding out.”

According to the on-site coordinator Billy Layton, this was the first week that NCBM participated in rebuilding homes.

Layton has been involved with disaster relief since the week after the flood.

Layton said that the reason the NCBM are doing disaster relief work is to let individuals in the affected communities know that there is someone who loves them even though they may feel as if they have lost everything.

Jeffrey Buffkin, the campus minister for the College of William and Mary, drove six hours with his students to take part in the disaster relief trip.

“During the flood in October, we knew that there was a really big need here,” Buffkin said. “I wanted to expose some of my students to all kinds of trips. I really wanted to do something where there was a great need.”

Buffkin said the areas of land that they were working on were low, and it was obvious they could be susceptible to flooding. After working with the people, he also noticed that many families had lived in this community for decades.

For Johnsonville residents Harvey Creel and his mother, Violet Creel, the floodwaters destroyed their home of 20 years and most of their personal possessions.

Violet Creel previously experienced three strokes leaving her with limited mobility. When they got a new mobile home after the flood, there was not a ramp for his mother to use to get out of the house.

The disaster relief team built Violet Creel a front porch deck, a back porch and a ramp.

As the teams were out working, students and leaders saw that the residents’ needs were greater than just porches and ramps.

Syquita Jones, sophomore pre-nursing major, noticed that Violet and Harvey Creel did not have basic necessities including a bed to sleep in.

Jones said the team provided the family with clothes, socks, toiletries and a blanket. Also, the team gave the family a bed.

“It was just really nice to make her happy,” Jones said.

“Even though it wasn’t much, she was really thankful and happy that she had new things since she lost a lot. She was actually shocked when the bed came in. She kept talking about how soft it looked.”

FMU BCM has been a part of various disaster relief trips such as clean up in New York City after Superstorm Sandy and New Orleans after Hurricane Katrina.

The January mission trip was a part of a state-wide project called “Rebuild SC.” The South Carolina Baptist Convention partnered with local churches and agencies to assist flood victims throughout the recovery process.

According to Ken Owens, the state director of BCM, approximately 135 students took part in three different disaster relief trips, including the trip to Johnsonville, over winter break.

The Baptist convention hopes to assist 1,000 homeowners in South Carolina who were affected by the flood.