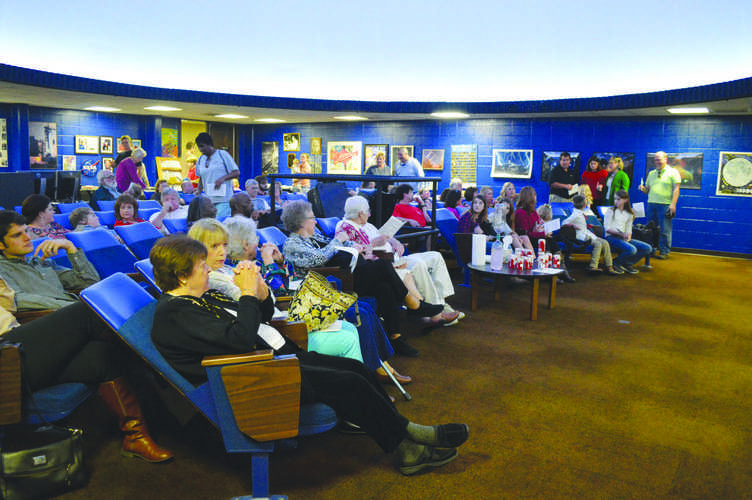 Guests at the Dooley Planetarium wait to hear about the astronomical possibilities the Christmas Star could have been.

Dooley Planetarium, located in the Cauthen Educational Media Center, explained the story of The Christmas Star, which came from an original script by Mr. Ed Dooley. The Christmas star was the star that the biblical wise men followed to find baby Jesus.

Dr. Ginger Bryngelson, professor of physics and astronomy, led the two shows on Dec. 13, the last planetarium shows before Christmas break. More than 130 people from FMU and the Florence community attended the two shows. The audiences spanned a variety of ages.

To start the show, a narrator read several Bible passages related to Jesus’ birth. Then, Bryngelson explained the purpose of the show: to attempt to explain the “Christmas star,” a star that the wise men followed in the Bible passages read with scientific evidence. After she presented several constellations and explained each one’s significance, Bryngelson displayed four types of astronomical occurrences that might have been what’s known as the “Christmas star” today. These four events are a supernova, a comet, a novae and a meteor.

Out of the four astronomical events that could be possible “Christmas stars,” none of them are recorded to have appeared around the time of Jesus’ birth. Many would have noticed nova and supernova, but none occurred near Jesus’ birth. Comets were seen as harbingers of evil, and meteors would have lasted mere seconds, whereas the Christmas star lasted much longer.

Many scientists believe that the wise men in the tales of Jesus’ birth in the Bible were actually astrologists who studied the stars and planets and related their positions to events that took place on Earth.

Since the wise men seemed to be the only ones who were excited about the star, scientists believe that they may have also been watching the conjunction of Jupiter and Venus in front of the constellation Leo. The Bible does not specify the exact date of Jesus’ birth or that of the wise men’s arrival, so some scientists believe that it was this conjunction in three-two B.C. that led the wise men to find Jesus. The names of Jupiter, Venus and Leo all hold significance in astrology as being “royalty,” like kings and queens, so many people believe that the wise men saw this as a sign that a new king had come.

Most experts agree that the birth of Jesus did not actually occur on Dec. 25. This date was chosen for the Christmas holiday because it was once the Winter Solstice, the shortest day of the year. Bryngelson explained during the show that the constellations that people see in Bethlehem in December are similar to the constellations we see in Florence in December. This is because Bethlehem’s latitude is 31 N, close to Florence’s latitude of 34 N.

Bryngelson regularly takes part in planetarium and observatory shows, and she encouraged the audience to keep searching for new knowledge about our universe.

“I hope that the audience gained an appreciation of the complexities of the heavens and an awe of what’s out there,” Bryngelson said. “I hope they gained a feeling of curiosity so they will keep questioning and keep coming back.”

While some may connect astronomical events to Jesus’ recorded birth in the Bible, there is no scientific proof that any connection that can be made is more than a correlation between the two events.