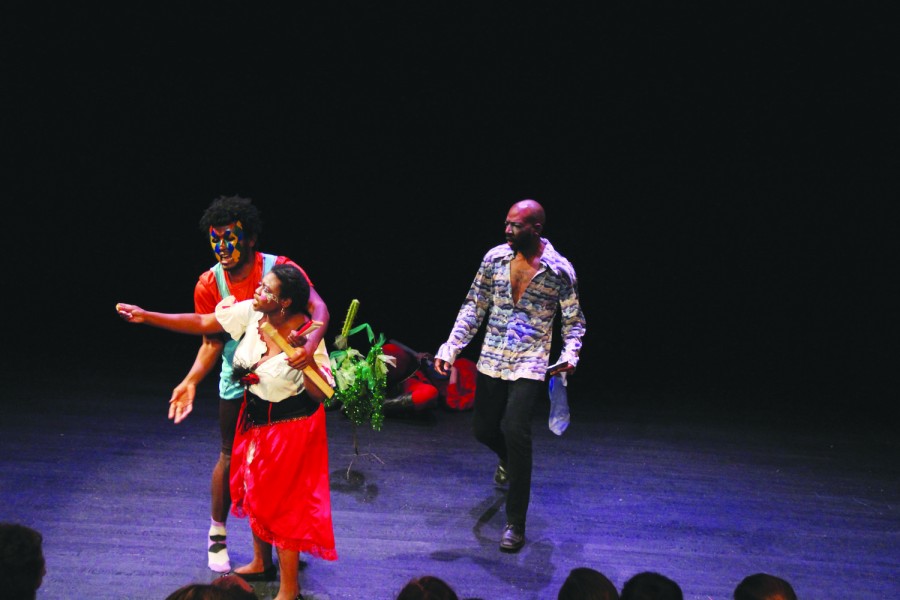 Students from the Theatre History I class perform improv comedy shows to learn about the history of the genre.

Commedia dell’arte reigned as a popular form of entertainment during the Italian Renaissance in the 16th and 17th centuries. Commedia focuses on improv. Shows like “Saturday Night Live” and “All That” use this type of comedy.

There were two groups that performed. Each group decided on a topic or scenario during group meetings. Each scenario was about fifteen 15 long, and they had only about three weeks to work on it.

D’ara Grady, a Fall 2015 graduate, performed in the commedia presentations.

“The class was divided into two groups,” Gray said. “Once we were in groups, we had to establish our preparation for the performance on our own. It was also up to us to decide on the times and locations of our group meetings. Due to Commedia dell’arte being improvisation, we would meet to establish the structure of our performances.”

She had her students perform Commedia dell’arte to help them better understand it. She said it is an important factor in theatre history.

“At one point in time, theatre was very religious,” Gray said. “However, Commedia dell’arte presented a comedic side of theatre with sexual innuendos and physical comedy. It’s use of improvisation has made a huge impact as we continue improv today.”

Larsen said that performing instead of classroom-based projects is an active way to learn more about commedia.

“I was hoping that the students would learn not only the history of the art form but by actively participating in the creation of a piece,” Larsen said. “They might discover the relationship between modern improv and commedia.”

The two groups had different scenarios but used the same characters, which is common in commedia. The characters had the same costumes and masks in both performances.

“Costumes and masks were important in commedia because they reflected each character’s personalities and behaviors,” Gray said. “It was also easy for different audiences to easily identify the characters since they wore the same costumes.”

Larsen said she hopes to have a course dedicated to only commedia dell’ arte because it is important for members of the theatre world.

“For actors, it’s another tool in the toolbox,” Larsen said. “For directors and writers, it’s a way to create a form that they might not have ever experienced.”