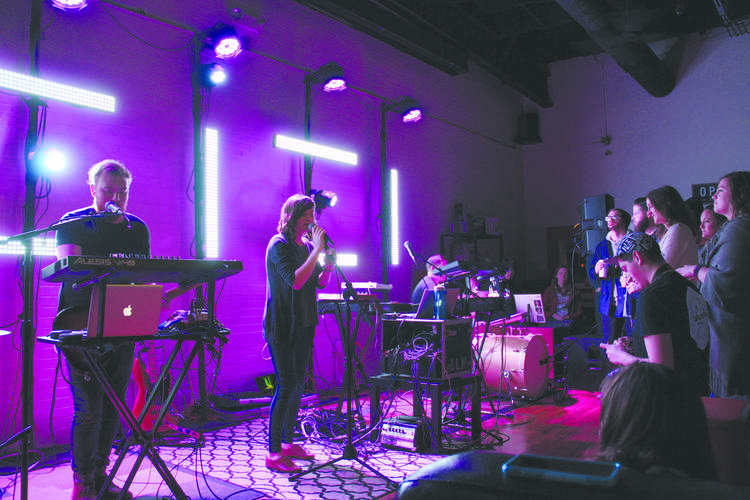 Two former FMU students, Kayla Staley and Alex Melton, performed with their synth-pop band, “The Feels,” at Lula’s Coffee Company after releasing their self-titled EP album at the beginning of January. Staley, Melton and third band member Tyler Bodkins peformed their debut concert as “The Feels” on Jan. 18.

Tyrie Young, a local rapper, opened the concert with six raps he wrote and produced. Mike Brank, an FMU graduate, followed Young with original songs he wrote for guitar.

“The Feels” began their performance with their song, “All Your Faults.” They played five songs from their EP and one cover of “The Killers’” song “When You Were Young.”

The Feels” was created during the spring of 2015 when Staley took FMU music professor, Dr. Brandon Goff’s, songwriting class and worked on the recording with Melton who worked in the recording studio.

“I was in the advanced production class working on the annual collective CD,” Staley said. “Alex and I were paired to work on writing a song for the CD, and the partnership went well. I found out that he already knew Tyler and had played music with him before. Then we decided that we should all play music together and eventually started writing songs, and that’s how ‘The Feels’ was born.”

“The Feels” wanted the band name to reflect the emotion the listener felt while listening to the music. Staley said the band members wanted to pick something that was easy to say and remember.

“We wanted to make music that connected with people in a way that they would be able to feel what we did when we were creating it,” Staley said. “With the phrase the feels becoming more popular in social media culture, we found that it conveys what our music aims to provide.”

Before “The Feels’” debut concert, Staley said she did not like performing in front of crowds of people.

“Performing with ‘The Feels’ is the most comfortable I have ever felt on stage before in my life, and I am looking forward to doing it more often,” Staley said.

Bodkins focused on manufacturing and digital distribution of the six song EP.

“Digital music is the way most people consume music nowadays, so distributing through iTunes and other digital retailers is a must,” Bodkins said. “There are a ton of hosting services that allow independent artists to deliver their music to online retailers for a yearly hosting fee. For this release, we went through a website called Distrokid.”

The CD is available for sale at Lula’s Coffee Shop and iTunes, and the album can be streamed on digital streaming apps such as Spotify.

Melton said the knowledge he has gained from the music industry program and working for the FMU recording studio, as well as working as the light supervisor at the FMU Performing Arts Center (PAC) has helped him grow as a musician and contribute to “The Feels.”

“The FMU music department gave me invaluable experience with producing recorded material specifically,” Melton said. “I learned a lot of production tricks and mixing and mastering techniques that we were able to utilize on ‘The Feels’ recording process.”

Melton designed the lighting for the performance. “The goal with ‘The Feels’ light design was to match our appearance on stage to the music we have created, while at the same time giving the audience something visually engaging to look at,” Melton said. “We wanted it to be flashy, big and colorful.”

For 2011 FMU graduate Brank, performing music was a way of expressing himself.

“I never really fell in love with any sports and was not very good with the visual arts, so when I began to play guitar in high school I always enjoyed writing my own riffs and lyrics instead of just learning other people’s material,” Brank said. “So it just sprang from that. Writing was a great emotional outlet.”

Brank works at Lula’s Coffee Co. and occasionally performs at their weekly open mic nights. Jeff Felton, store manager of Lula’s Coffee Co., said the goal of the coffee shop is to provide an environment for young artists to share their talent.

“We think there is a lot of local talent, and we want to cultivate a community where artists have the opportunity to play their music and maybe enjoy some success,” Felton said. “We also believe that music brings people together. Togetherness and relationship is a main driving force behind our band.