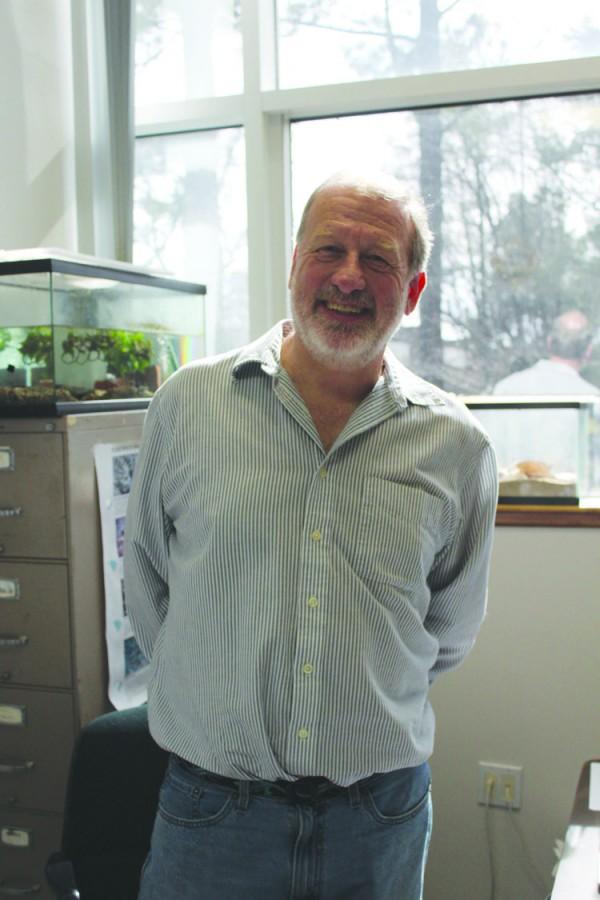 Dr. Jeffrey Camper studies a new species of snake he discovered while in Ecuador at the Wild Sumaco Biological Station.

On a night trek with FMU students in Ecuador looking to capture frogs, Dr. Jeffrey Camper, FMU professor of biology, kneeled down to retrieve plastic bags, but instead reached down and picked up a slender, black snake as it slithered by his foot.

Camper said he had a knowledge of snakes, recognized the snake as nonvenomous and did not hesitate to capture the snake with his bare hands. Camper bagged the snake for study, unaware that he had just captured a new, undocumented species of snake.

The snake’s external appearance was similar to other species of snakes found in the same area, Camper said. After sending the specimen for DNA analysis, it was determined that the snake captured by Camper was a new species of the synophis snake, more commonly called the bicolored snake. The top of the snake is dark green to black, and the bottom is tinted yellow. This snake is not very different from previously classified snakes, but it does have a slightly different genetic variation. This could demonstrate another evolutionary lineage of the synophis snake Camper said.

Between 2012 and 2014, Camper caught two of these new species of snakes, one of which will be used as the holotype for this new species of synophis snake. A holotype is the example used in the official scientific presentation of the species.

Camper is now part of an international team, involving colleagues from a university in Ecuador, which has published a journal article describing the new species. Camper also said they have found a roadkill specimen that could be the third snake found of the new species.

For Camper, this discovery was an accomplishment and one of the reasons he became a biologist.

“For me, it was a really big one,” said Camper. “It was something I have dreamed of doing, and the fact that it was a snake was even better.”

Camper said he has always been interested in snakes. He first became intrigued when he spent time catching nonvenomous snakes around his yard as a child.

“I have been fascinated that something with no legs can move that fast,” Camper said. “I was one of those little kids who liked to catch things, and I never grew out of it.”

Camper’s interest in snakes continued through college and graduate school. He studied the evolutionary biology of snakes as he pursued his degree and has continued this study throughout his career as a biologist.

Another issue that Camper would like to tackle is that of decreasing biodiversity.

“It is an underappreciated environmental problem,” said Camper. “We hear a lot about climate change, but also we need to hear more about loss of biodiversity.”

Camper plans to continue traveling to Ecuador and exploring the forest around the Wild Sumaco Biological Station, which is a biological facility managed in part by FMU.

“I hope to go back and find more specimens,” said Camper.

In Ecuador, Camper collects roadkill specimens as well as live ones. In order to capture live snakes, Camper ventures out into the forests at night with a bright light. He usually looks for snakes on low branches and on the forest ground.

Wild Sumaco Biological Station is a hot-bed for biodiversity due to its location Camper said. This is why biologists, like Camper, travel there to search for undocumented species. Camper does explore locally, but his success with snakes has stemmed from his trips to Ecuador.

Wild Sumaco has been a hub for new discoveries made by researchers and students. As a partner with the station, FMU sends its faculty and students to the facility for hands-on experience. Students interested in more information regarding traveling to Ecuador can contact Dr. Travis Knowles at tknowles@fmarion.edu.