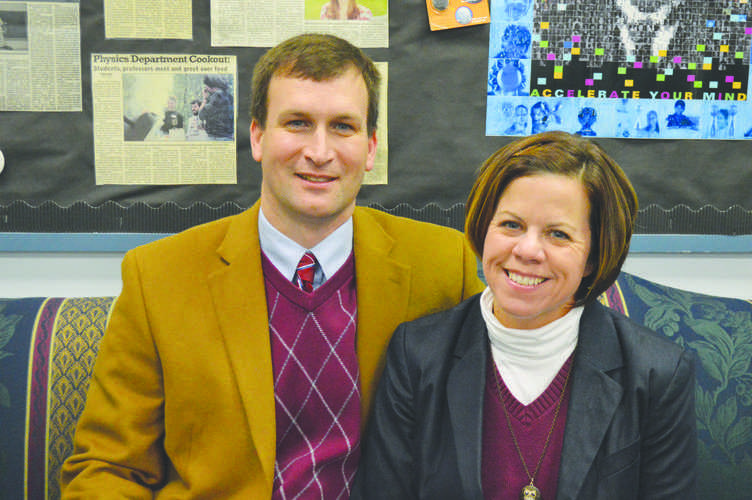 Dr. Derek Jokisch and his wife Kelly Jokisch teach at FMU in different departments. Dr. Jokisch teaches physics and Mrs. Jokisch teaches music. Although they do not see each other often on campus, they say they enjoy working with the same students.

Although they work in different departments, Derek in physics and Kelly in music, both Dr. and Mrs. Jokisch enjoy working at the same university. While they rarely cross paths academically, they love the connections that they’ve been able to make with both faculty members and students.

“It’s fun because we don’t have a lot of professional interaction but we work with the same people and the same students,” Derek said.

They spend their days studying different things, but music is what brought them together.

Kelly and Derek met during graduate school at the University of Florida. Kelly was offered an assistantship, and a friend of Derek’s asked him to come down from Illinois to help assist the new band director. During their shared time, the two got to know each other well. Kelly even conducted the basketball pep-band the Derek played in.

The Jokischs’ involvement in music gave both of them the opportunity to travel. During his undergraduate years, Derek was invited to march in the St. Patrick’s Day Parade in Dublin, Ireland.

Kelly had the opportunity to travel to Europe. After completing her graduate studies, she was offered the chance to earn a Performance Certificate from the Göteborg University School of Music in Sweden.

The experience of studying music in a different culture influenced her teaching style when she came back to the U.S.

When she began teaching music, she incorporated different styles and forms of performances that she learned in Sweden.

Her creativity and open mind to music is part of what has made her a talented teacher and accomplished musician. Kelly now conducts the FMU concert band and is a member of both The Woody’s and the Florence Symphony Orchestra.

Derek has received numerous awards from FMU such as the J. Lorin Mason Distinguished Professor Award and the Award of Excellence in Research. He also received the the Elda E. Anderson Award in 2010 from the National Health Physics Society.

However, their fields mildly overlap every now and then. Derek brings his trombone to his classes to create sound waves, and Kelly participated in a presentation about the planets. She performed a planet suite and helped another professor create visuals about each to explain the planets.

However, it isn’t all work for the pair. Derek is also a member of the Florence Symphony Orchestra, as well as the university’s concert band. With 20 of the positions being taken up by students and the rest by community members, both Derek and Kelly said they feel like that ratio makes the experience of being involved with the concert band very special. Instead of it being impersonal like in bigger groups, Derek and Kelly feel much closer to everyone involved.

The two also spent 15 years as a part of a rock band that included Dr. Phillip Gardner from the English department. They performed at local events such as Pee Dee Pride hockey games, the Pecan Festival and a fraternity party in Clemson.