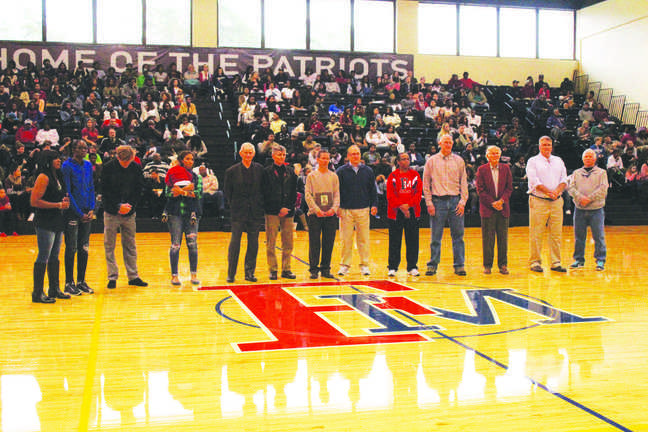 The FMU Athletic Department inducts 1992 graduates Mary Jackson and Michael Colaiacovo, surrounded by previous inductees, to the FMU Hall of Fame during the Homecoming basketball games.

Jackson and Colaiacovo graduated FMU in 1992.

Colaiacovo said he was humbled by the experience of being recognized in the hall of fame.

“It is probably one of the best things that happened in my life,” Colaiacovo said. “You are part of everyone else, and it makes me feel really good.”

Colaiacovo was inducted as the 44th member to the FMU Athletic Hall of Fame. He is a former cross country and track and field runner. In his time at FMU, he earned several district honors in both cross-country and track and field all four years. He won the district championship two times. He also competed nationally and received All-State recognition. Colaiacovo ended his track career with 210 points, placing 14th on the Patriot all-time points list.

Since graduation, Colaiacovo moved to Virginia, where he works as a criminal investigator for the U.S. Postal Service. He still runs 55 to 60 miles each week.

Colaiacovo ran with the current cross-country team the morning of the induction ceremony. “We did 13 miles this morning, Colaiacovo said. “I am just enjoying every minute of it that I can.”

Colaiacovo emphasized how much he loved and missed FMU and the sense of community that it has.

“This school is so unique, and you aren’t going to get lost in the big picture,” Colaiacovo said. “I am so thankful my path took me here.”

The athletic department inducted Jackson, a former basketball and volleyball player, as the 45th member of the FMU Athletic Hall of Fame. Jackson lettered all four years in both basketball and volleyball. She earned All-Conference awards in volleyball twice and earned it three times in basketball. She was chosen to play for the National Association of Intercollegiate Athletes (NAIA) District Six All- District team in basketball twice and earned honorable NAIA All-America recognition. Jackson participated in the volleyball All-District Six. She was named District Six and Palmetto State Conference Player of the Year. Since graduation, she returned to Columbia, S.C. and works at Square D and Schneider Electric.

Jackson gave a lot of credit to her parents and family for being where she is today, including her induction into the hall of fame.

Inductions into the hall of fame are based on a set of regulations. Individuals up for nomination need two varsity letters from the FMU Athletic Department and to have graduated from FMU 10 years prior to the induction.