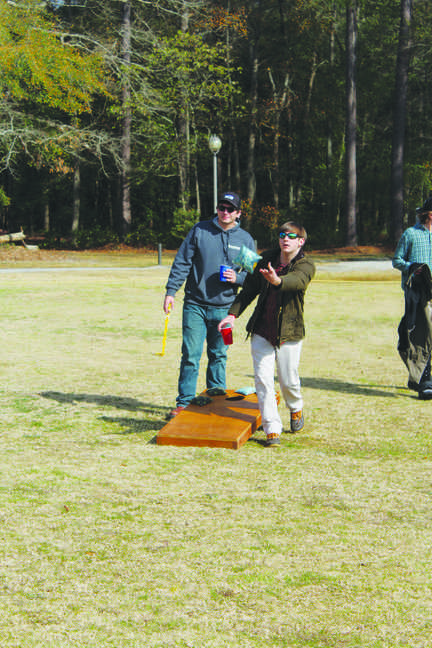 Tailgaters socialize by playing games such as cornhole and by eating and drinking refreshments provided by FMU.

This year’s Homecoming festivities introduced a tailgate and silent auction after the parade.

The Athletic Department offered tailgating spaces for rent beside the University Center and on the practice soccer fields. Groups paid $20 to reserve a space. This payment covered necessary expenses for the tailgate.

The tailgate began at 11:30 a.m. after the Homecoming parade, and tailgaters were required to clean and pack up their space by 7 p.m.

Individuals over age 21 were allowed to drink alcohol during the tailgate but prohibited attendees from taking the alcohol outside the tailgating area.

The FMU Alumni Association had a heated tent stocked with refreshments for the visiting FMU alumni to enjoy in the tailgating area.

Two students though the tailgating was a great addition to the homecoming events.

“It’s awesome that we can all hang out and show our spirit,” Katie Lewis, senior history major said.

Lewis added that she thought more people would have attended if tailgating was advertised better.

“I thought the Homecoming tailgate was a great opportunity for the FMU community, young and old, to come together and share the experience of Homecoming together,” Gainey said.

Dr. Ronald Miller, director of Career Development and a member of the Kappa Alpha fraternity, tailgated with some of his fraternity brothers.

“I had a relaxing time visiting with brothers whom I had not seen in a while,” Miller said. Everyone was appreciative of FMU’s giving us the opportunity to celebrate Homecoming by having harmless fun. Props to FMU for a successful tailgating day.”

More than 50 businesses donated items to the Athletic Department for the silent auction held in the gym. People received a bidding number and bid on the items.

Each item had a beginning price and had set increments for how much higher the next bid had to be. Some items available for bidding were FMU shirts and sweaters, FMU athletic memorabilia and surprise bags that contained several items wrapped in tissue paper.

Bidding started at 11:30 a.m. and concluded at halftime during the men’s game. The auction and tailgating happened at the same time so that more people would be near the UC to visit the auction. At the end of the half time, bidders could go see if they won the items they bid on.

Freshman political science major Rileigh Wagner was one of the athletes who helped with the silent auction.

“I think the auction is really cool,” Wagner said. “We have had a lot of people come in.”

The auction raised approximately $2,400. The money will go towards supporting FMU’s athletic teams.