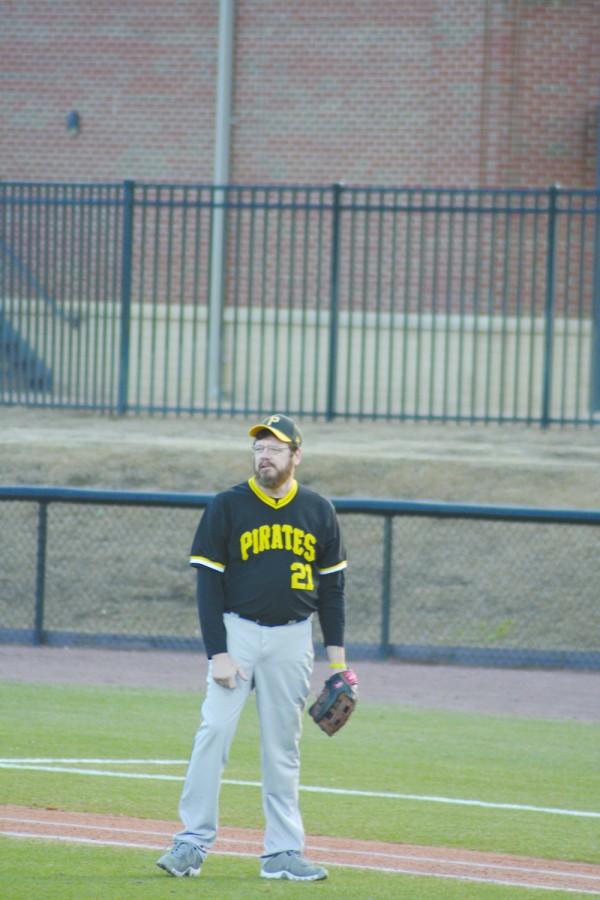 Mass communication professor Dr. Frank Rybicki shows his enthusiasm for the sport by dressing up in his personal baseball uniform.

The FMU baseball team celebrated the university’s employees during Faculty Appreciation Night when 12 professors threw out the honorary first pitches in their game against the Belmont Abbey College Crusaders.

The team’s seniors each chose the professor who made an impact on him during his time at FMU. The faculty members were introduced as they lined up on the field.

Each faculty member stood facing home plate, and they were each matched with a baseball player who would catch the ball.

Packett, a mass communication professor, said she was excited to be asked to participate in the ceremony, but she was nervous about actually pitching the ball.

“I felt very honored,” Packett said. “It’s always an honor to be chosen for something like this. The only thing I was worried about was throwing that ball.”

All of the professors threw the balls at the same time, and the baseball players scrambled to catch them. The catchers stood a few feet away, but many professors were not nervous about their pitch, according to Crawley.

“I personally wasn’t nervous because I had practiced with my son,” Crawley said. “Also, my senior, Randy Loew, made me feel at ease. I thought I would be a little nervous, but all of the players were really nice. It was a fun experience for me.”

However, not all of the professors were confident in their pitching skills including Packett.

“I don’t think I’ve ever been a very good pitcher,” Packett said. “I practiced a little bit, but they didn’t make us stand very far away from our catchers.”

Some students attended the game just to see their professors throw the ball.

“It ended up being really fun,” Packett said. “It was just such a fun atmosphere, and the players are so great. It was a treat, and they were glad to have us there. They took care of us.”

After the first pitch, the Patriots went on to play a close game against Belmont Abbey College. They played a 10th inning and lost by one run with a final score of 4 to 3. This game was the team’s first loss this season.