Students learn to “Fight Back” 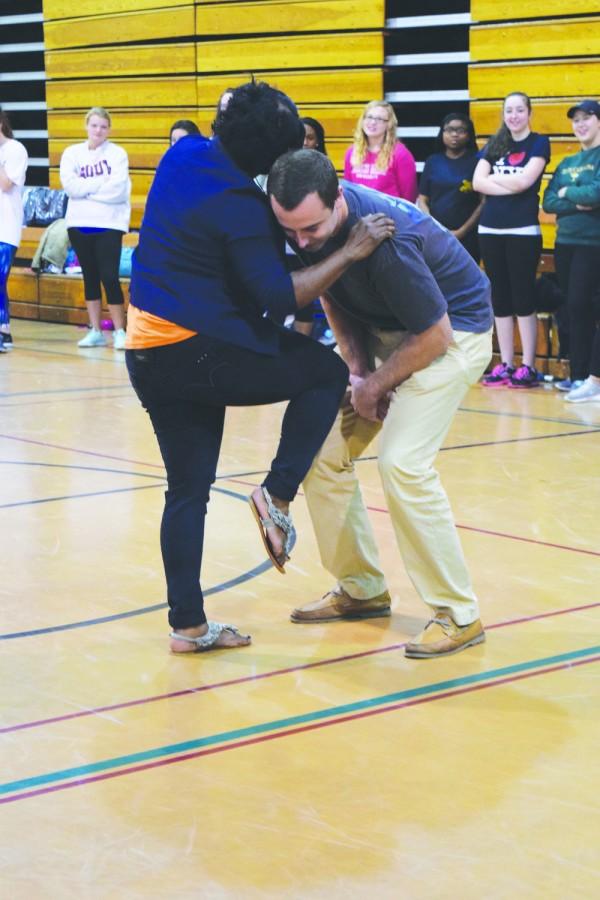 Tracy Williamson demonstrates self defense techniques with the help of student Hayden Bunch during Fight Back.

This was the first ever Fight Back self-defense class arranged by McKayla Parker, a junior English major. Parker said she was inspired from a close brush with danger while shopping at a department store earlier this semester. Parker noticed that two strange men followed her around the store. After Parker told another customer, the men went outside and waited for her.

“They always talk about a woman’s intuition,” Parker said. “My instincts kicked in, and I knew that I needed to be aware of everything going on around me. If I wouldn’t have been aware of my surroundings that night, I may not have been here today.”

After the shock began to wear off, Parker said she began to recognize that if they had attacked her she wouldn’t have had any way to defend herself. That realization is part of what lead her to organize the Fight Back class.

Parker said she gained the attention of numerous self-defense coaches offering help after posting about the horrific event on social media. The positive feedback led her to seriously inquire about creating an event where college-aged women could learn to defend themselves.

“I felt like it was important that college girls all over know how to defend themselves,” Parker said.

After much planning, Parker was able to Tracy Williamson, who works as a Reducing Our Assault Risk (ROAR) instructor with The Pee Dee Coalition against Domestic and Sexual Assault and Master James McElveen, a Tae Kwan Do teacher.

“[I hope the class taught the students] basic skills on how to defend themselves and woke everybody up and made them realize that this is not a game,” Parker said. “It’s dangerous out there, and there’s people that can really hurt you and it’s important for you to be able to defend yourself.”

Williamson talked to the students about certain things that they could do to help lessen their chances of becoming the victims of sexual harassment/assault, such as being aware of their surroundings; avoiding bad situations; watching their drinks when at bars, clubs and parties; carrying their car keys in their hands so they won’t have to stop in a parking lot to find them; being their own advocate if they don’t feel safe; saying “no”; and knowing how to defend themselves against an attacker.

Sergeant Tracy Tolson of FMU’s campus police talked to the students and encouraged them not bring strangers back on campus and to be aware of the risk of stalkers.

According to both Williamson and Sergeant Tolson, most stalkers target freshman girls because of their lack of knowledge about the campus and their trusting nature.

While talking to the students about the importance of yelling for help and making a scene, McElveen offered a solid but grim piece of advice: if you’re ever in a position where someone is trying to take you, fight back. You have a better shot of getting away and living if you fight back. McElveen also said that women should only fight back to the extent that they can escape and to not to stick around and keep fighting.

The event gathered so many people that FMU is looking into providing an eight-hour self-defense class later in the semester, as well as additional classes in the following semesters. McElveen also offered a special discount to FMU students who are interested in taking his self defense classes. His studio, School of Ultimate Tai Kwan Do Center, is located at 1210 S. Cashua Dr. Florence, S.C.

“My favorite part of the self-defense class was learning how to fight off predators with a purse. Although, Master James’ enthusiastic personality made the class enjoyable as well” said Kendalyn Woodard, junior elementary education major.