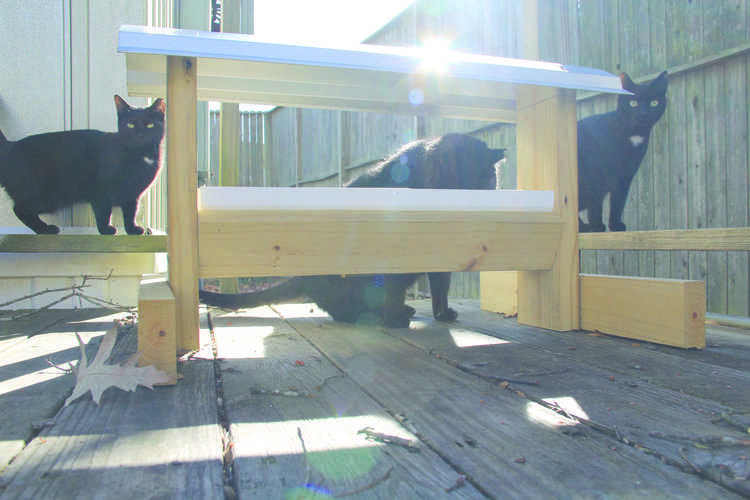 Known by the theatre department as the “trailer cats,” many felines visit a feeding spot behind the Hyman Fine Arts Center

Why are there cats on campus?

“Cats are weird animals that reproduce like crazy,” Kaycee Brown, freshman accounting major, said. Brown added that she guessed someone probably had pet cats on campus and, since they reproduced, the population grew from there.

According to FMU president Dr. Fred Carter, cats have always been on campus, at least since before he came to the university in 1999. He said that he would guess that the cats have been here since the creation of the university.

“But that’s not unusual with rural, residential campuses, especially those that are geographically removed from urban areas,” Carter said. “They all tend to have a fair amount of cats.”

Carter remembers taking his son to look at colleges and pointing out the cats on other campuses. He said his son told him they were just like FMU.

“I don’t think that’s coincidental,” Carter said. “I think cats tend to flock to college campuses because students feed them and because there’s food put in dumpsters and other places on the part of health services, so I think they’re able to acquire food.”

Carter said e thinks people in the area had litters of kittens they could not take care of, so the kittens were brought here. He said people seem to believe that the kittens will be taken care of here.

“So I think the biggest source of our cats are from people off campus bringing cats on campus, but we can’t prove that,” Carter said. “You know it’s sad, at least they don’t dispose of the cats. In their own way they’re seeking something humane for the cats.”

Carter said it is not always the best news for the university to have more cats on campus, and FMU takes steps to reduce the cat population in humane ways. Carter said they do everything they can to make sure that as many cats as possible are spayed and neutered, however, the cats are not in loving homes and living on campus is not the best life for them.

Over time, people brought injured or sick cats to Carter, and he nursed them back to health with the intention of releasing them once they were well.

“Of course by that time, you’re so attached to them that you can’t possibly let them go,” Carter said. “So in 17 years, I’ve gone from never having owned a cat in my life to now owning five cats, largely as a result of cats being found on campus that were sick or injured.”

Carter said occasionally, students and faculty become attached to the cats and adopt them. Carter said he remembered a potential student touring the university with her family about a year ago and finding a kitten. The family approached him and asked if they could take the kitten home, and Carter said he knows that a family left with that kitten, giving it a good home.

Carter is unsure of the number of cats at FMU but said he thinks the number varies substantially during the course of the year. In the winter, Carter believes that there are fewer cats on campus because the students are not providing food for them during break, so they leave to seek food and shelter elsewhere.

One of the things Carter tries to do during winter break is feed the cats. He said he attempts to take about 25 bowls of dry food to the areas with the largest cat populations every day.

“I put seven or eight bowls in each area,” Carter said, “I get a little choked up over animals, particularly animals that are defenseless and homeless and need support and help so I do what I can.”

“It was a lot tougher of a situation before they built the new FAHS shelter, the no-kill shelter,” Carter said. “We didn’t take them to the old shelter because we wouldn’t put kittens in a situation in which they might be destroyed at some point.”

“We definitely don’t want the cat population to get so large that it becomes a problem for our students or the university,” Carter said. “It’s something that we monitor pretty closely, but it’s hard to sponsor an adoption thing because we don’t want people to drop off cats that won’t be cared for.”

Keith Best, chair of the fine arts department and professor of theatre at FMU, said he is a cat person who has become attached to the cats on campus. His involvement with the cats at FMU began when a cat with kittens came to the fine arts trailer.

Best has adopted so many cats from campus and elsewhere that he is at capacity and is no longer able to take any more. One summer he cared for 15 newborn kittens and six adult cats in addition to his own five cats and found a home for almost all of them.

Best has also been involved with getting cats on campus spayed and neutered. He is particularly involved with those that he calls the “trailer cats” who tend to stay close to the trailer behind the Hyman Fine Arts Center (FAC).

Best said Carter approached him with a concern about the cats needing shelter during the winter months. They built eight cat houses. Two or three cats can fit in each cat house.

An FMU professor built the shelters, and they cost about $70 for each house. They were spread across campus, including two near the pond, two near the dining hall, two near the library and two behind FAC. Best tries to regularly check on the cat houses and replace the straw for the cats.

The major concern Best has is that campuses across the country have become prime spots for drop offs.

“I would hate for anyone to drop off cats here and just hope they’ll be taken care of,” Best said. “I don’t want more cats dropped off.”

Best said one cat named Smuts that has captured the hearts of many professors went missing for two weeks, and Best could not find her in any of the usual spots. He checked the shelter in Effingham and the FAHS as well. It turned out that Smuts had been accidentally locked under Stokes Administration Building (SAB) for over a month. She was eventually found and recored well.

“It’s amazing how resilient and resourceful cats can be,” Best said. Having cats on the FMU campus has both advantages and disadvantages. One such advantage, according to FMU biology professor Travis Knowles is the ability cats have of prompting humane responses from the people on campus, which Knowles said is one of the greatest qualities of the human species. “Everyone loves pet cats, and people’s innate reaction is, rightly, to treat them humanely,” Knowles said. “Cats are among our most beloved household pets, considered to be members of the family.” There are also disadvantages to the campus cats that Knowles pointed out. One such obstacle large outdoor cat populations create is the loss of small native animals, like ground nesting birds, nestlings, small to medium sized mammals, reptiles and amphibians, he said.

Knowles said that cats are natural predators and are not to be blamed for their hunting. However, he added that it is a threat to the small animal populations. People often do not extend the same humane concerns for the cats to the native wildlife because their deaths do not always occur in plain sight.

According to Knowles, outdoor cat populations are now thriving in places where they are not native predators, such as North America. They are the No. 1 cause of direct bird mortality in the U.S., killing billions each year.

“Although habitat loss is still by far the biggest threat to most wildlife, outdoor cats have increased to the point that they now negatively impact many native vertebrate populations, especially those already endangered or at risk of extinction due to small populations,” Knowles said.

Although he is not sure, Knowles suspects that the cat population on campus grew from a small number of pets that were allowed to roam outside, and the size grew from the cats’ natural reproductive instincts.

Another possibility is that irresponsible pet owners may have released unwanted pets on campus, which he said is more common than many people realize.

“I do not know and it is very difficult to estimate [population], because I have seen individual cats hiding inside underground sewer lines and other hard-to-spot location,” Knowles said.

Knowles also added information about a popular approach to outdoor cat populations called trap, neuter and release (TNR) to the dialogue about cats on campus.

“It is a very wellintentioned and quite humane attempt at a solution,” Knowles said. “The problem, I’m sorry to report, is that population studies have shown that at least around 80 percent (or more) of the population needs to be neutered to have any significant impact on cat numbers.”

Knowles pointed out that living outdoors is not only a concern for the native wildlife population but is dangerous to the well being of the cats themselves.

“Outdoor cats are subject to death or injury from attacks by larger predators such as coyotes and raccoons, automobile collisions, fights with other cats, parasites and disease,” Knowles said. “It must become the responsibility of all animal lovers to keep their pet cats indoors and work together to eventually draw down outdoor cat numbers. It’s good for the cats, good for our native wildlife and good for our humanity.”

Knowles recommends that people visit the American Bird Conservancy’s “Cat Indoors” program at http:// abcbirds.org/program/cats-indoors to gain a better understanding of the needs of both the cats and wildlife.