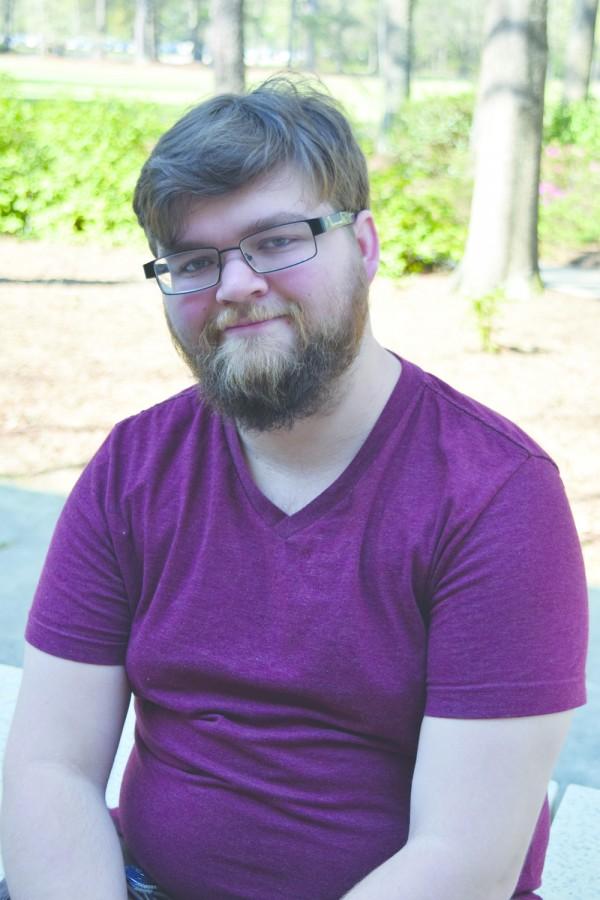 English major Mason Jones recently presented a paper on children in Russian Literature at the Philological Association of the Carolinas conference.

Senior English major Mason Jones established himself as a credible student in the English department at FMU by being published multiple times in school journals and serving as the president of Sigma Tau Delta, the English honors fraternity. He assists other students with papers at both the Writing Center and the Tutoring Center, and he said he hopes to someday have his own class at a university.

Recently, Jones presented a paper at the Philological Association of the Carolinas conference, an international conference. His paper analyzed the treatment of children in “The Brothers Karamazov” by Fyodor Dostoyevsky. To present at the conference, professors, graduate students and a few undergraduates submitted their personal research in fields of literature, language, and education. Jones read his paper and received questions afterwards.

Jones said the audience received his work well, and Jones said graduate students and professors approached him from various universities who praised him for his work.

“Overall, the reaction was very positive,” Jones said. “I got good feedback on content and presentation, and I was encouraged to submit it to the conference’s journal ‘Postscript.’ Several FMU professors have been published in that journal before.”

As an undergraduate student, Jones impressed the conference’s audience with his interesting perspective on Russian literature.

“Russian lit. is something I’ve always been interested in because I really like the way the stories are written and how human and relevant it is,” Jones said.

“My biggest motivators were Dr. David Cowles, who is like my personal mentor, and Brandi McBrayer, my supportive girlfriend,” Jones said.

Jones said he’s passionate about being an English major and has become involved in the department and formed close relationships with the professors.

“I became an English major because I think that literature studies are important,” Jones said.

“I enjoy looking at past perspectives and also at people. When we look at humanity as a whole, we learn more about ourselves and how to treat others. I couldn’t imagine myself studying anything else.”

In the next year, Jones said he plans to apply to the graduate schools at Auburn University and Duke University. In graduate school, he wants to study comparative literature with an emphasis on German and Russian works. He said he will also work on writing books and other publications to add to his list of published works. After obtaining a higher degree, Jones said he plans to start a career at a large university teaching literature and conducting research in his field.

When he’s not writing, Jones said he enjoys reading, going for walks outside, playing video games and grilling cheeseburgers. He loves to be outside appreciating the beauty of nature, and he participates in the Green Club on campus to promote the protection of the environment. Even as an English major, Jones has many areas of interest that relate more to the interests of science majors.

Given three words to describe himself, Jones replied that he is nerdy, sarcastic and intuitive. He’s a writer, so he said these three characteristics shape how he expresses himself through his writing style. He’s constantly working on a new writing project and always willing to share what he’s been working on with his friends. Jones said his imagination comes alive in his stories, poems and essays, and this has helped him get published in journals such as the “Final Draft.” He plans to continue writing and submitting, hoping to earn praise and respect from the English department and from scholars who read his work and attend his future presentations.