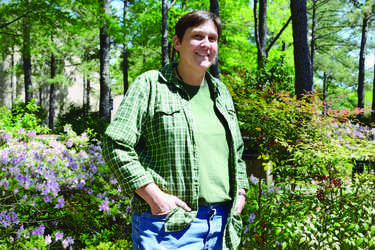 A biology professor at FMU is making waves in the community by creating a program at a local elementary school to show students real-life applications of science, technology, engineering and mathematics (STEM).

Through funding from a Research on Education and Learning grant (REAL), Lisa Pike created a course for 12 FMU students to gain college credit while teaching in their community once a month for six months. Pike joined Teena Kyer, the director at Montessori School of Florence, to create STEM Nights.

Inspired by the decreasing involvement that elementary students have with STEM subjects, Pike said she wanted to have a hands-on way for students in fourth and fifth grades to learn after school.

“Research shows that there is significant improvement in children’s self-confidence and learning when family members are more actively engaged in their learning,” Pike said. “By showing interest and exploring science and engineering with their children, parents and caregivers can positively influence a child’s attitude about engineering and encourage the children to think about STEM careers.”

Pike said she wanted parents to get involved in STEM Nights just as much as the students were.

“When the family is involved with the student doing science and math together, it’s kind of a whole new ball game,” Pike said. “The parents are seeing what the kids are doing, and they’re conversing with the kids about what they’re doing. They’re seeing how the kids are excited, so the parents get excited. And then the kids get excited. It feeds on each other.”

Pike said that she began STEM Nights at the Montessori School of Florence because she already had connections there and because it was small enough for her to start the program without being overwhelmed by the number of students participating.

“The intent is, if it goes over well, and it is, then perhaps we could move out to a school where the kids are really going to need the help,” Pike said.

Pike said she hopes to spread out to other schools soon, but she anticipates some difference between the students at larger schools and student at the Montessori School of Florence.

“The economic issues are sometimes pretty big in terms of when you look at how they’re learning and what they’re learning and test scores, and it’s often pretty tied to their socioeconomic status,” Pike said. “I’ll be moving to a school that might have some more challenges. The parents are typically going to be a lot busier. Whether I can get the families to commit to come one night a month and get their kid there, that’s going to be one more hurdle that I’ll have to try to figure out.”

The STEM nights are just one of the ways that Pike reaches out to the community and to students who are not yet in college. Pike said she has recently been working on science education and environmental science issues.

“In terms of science education research, I have been looking at the efficacy of ‘clickers’ in the classroom and problem-based learning, and, my newest interest, environmental education and teacher training in environmental and general biology techniques,” Pike said.

She has created a variety of teachers’ resources for fourth through 12th grade life-science classes, and she makes those available to teachers on her website, lisapike.weebly.com

Pike came to FMU in 1993 as a biology professor. She currently teaches Biology 103, 105, 106 and 204; Environmental Science 201 and Introduction to Gender Studies 101. Pike also serves on the Professional Development Committee and the Tenure and Promotion Committee. She was the president of the local Pee Dee Natural History Society as well.

Pike received her master’s degree in marine biology at University of North Carolina Wilmington, and she did her post-graduate research in Australia. Pike said she enjoys SCUBA diving, and she has logged over 100 hours underwater in locations such as New York, Canada, the Atlantic Ocean, the Caribbean and the Great Barrier Reef.