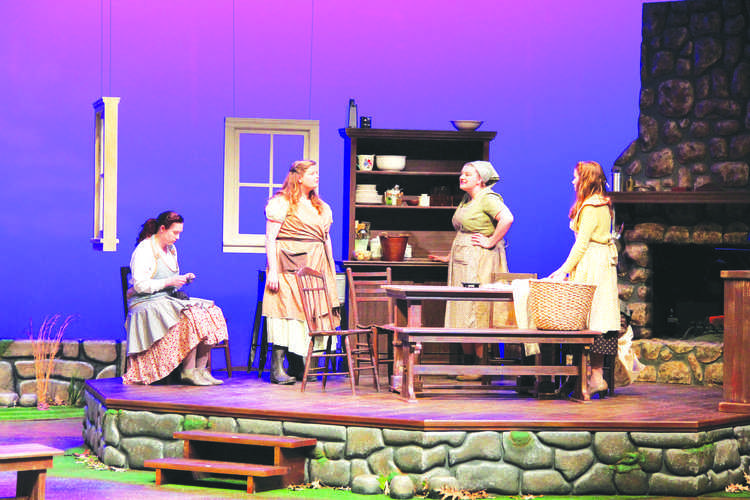 “Dancing at Lughnasa” is the tale of Five sisters living together, while taking care of their sick uncle Jack.

Written by Brian Friel, the 1991 play is the story of five unwed sisters who live together while taking care of Michael, Christina Mundy’s 8-year-old love child, and Uncle Jack, who returned from Uganda with Malaria. The play begins with Lughnasa- a festival celebrating the last of summer and that takes place all of August. There was a large dance around a bonfire that the sisters wanted to go to, but while discussing the possibility, religion and love complicate the decision. As the days go on, long-lost lovers and different beliefs change the family dynamics. The love that the five Mundy sisters share for each other overcomes their occasional frustration with each other, and through many trials and disagreements and even separations, they remain family.

Allison Steadman, a professor of theatre arts who specializes in costume design, directed the play. She said that there were many factors that were involved when she picked “Dancing at Lughnasa.”

“Part of it is just I really like the show itself,” Steadman said. “I like how it shows how important family connections are, I like that it looks at the idea between secular and religious, and I also think that we celebrate a lot of happy aspects of life, and sometimes people go through things that are hard. Some of that’s in this play, and I think that deserves as much attention as some of the happy stuff.”

Not only did the play show the student actors that as they perform, they should focus on the good and bad in life, but it also taught them one lesson about acting in general.

“Educationally, it’s good for them to do the dialect and to understand a different time period,” Steadman said. For freshman English major Fatima Elhuni, the humor was something she liked best.

Steadman said that what she found best and the hardest parts of the play were very different.

“The best [part] is seeing the actors start to make those connections as if they are family, like there’s kind of a sisterly bond between them,” Steadman said.

The hardest part is probably trying to get them to understand both the serious and the lighthearted moments and give them equal attention.”

Dr. Jon Tuttle, an English professor, said that it was something very small that stood out to him and made the play even more memorable.

“To me, there was one line that brought the whole play together, and that was Michael’s observation at the end that, ‘Atmosphere is more real than incident,’” Tuttle said. “What we had seen was not a plot, exactly, not a series of causal events.

Rather, we were given a chance to observe a life long ago and far away, a life that is gone now, and we were made to care about the people in that life.”

Tuttle also said that the conflicting ideas appealed to him.