Theatre student prepares for next scene 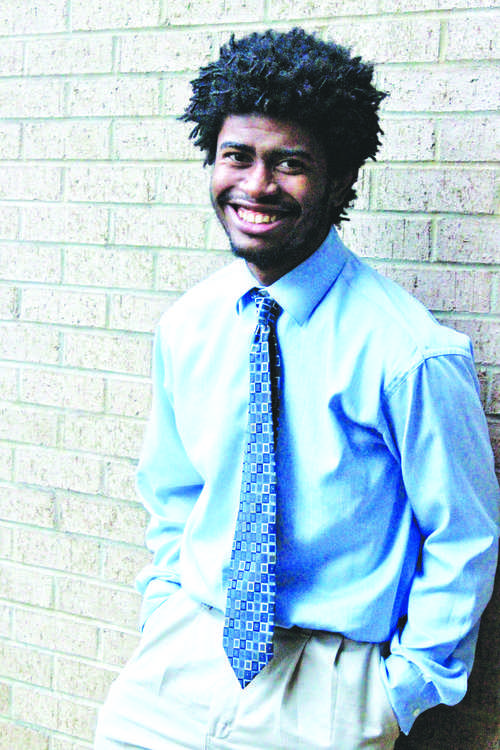 Senior theatre major Xavier Nettles hopes that by participating with the Patriot Players, opportunities to work on the stage will become more available.

Xavier Nettles, a senior theatre major with concentrations in acting and directing, lives and breathes to be around the stage.

He’s from the small town of Darlington, S.C., and he currently lives with his fiancée, junior painting major Shawnette Winn. Nettles works in the scene shop in the Hyman Fine Arts Center at FMU, helping with creating scenes, designing sets, painting props and rigging, and he spends much of his time preparing for the next big show. Nettles has acted in several performances at FMU, and he helps to organize several theatre events each semester.

As the president of Patriot Players, an acting club, Nettles puts together performances such as Ten Minute Play Festivals and other small shows each semester. Patriot Players is open to students of all majors who have an interest in theatre, and a typical meeting involves Nettles showing others how to build resumes for theatre careers, planning for events such as the Zombie Run and working on performance skills. With these experiences and a love for performance art, Nettles said he hopes to continue to succeed.

“As an actor, I won’t be offered the same roles now as I will 10 or 20 years from now,” Nettles said. “Every year affords new opportunities.”

Last summer, Nettles spent his time working for a movie production company, which he found to be an extremely different world from the onstage performances he’s known so well.

This summer, Nettles said he plans to continue working on sets of shows with a company in Greenville, S.C., called GLOW Lyric Theatre. He connected with the company while at the Southeastern Theatre Conference, an event that a group of FMU theatre majors attends yearly. Through this networking opportunity, an employee of the theatre interviewed Nettles while at the conference.

In his endeavors as an actor, Nettles said he takes inspiration from James Earl Jones and Morgan Freeman.

“I’m inspired by James Earl Jones because of his powerful, astute command over his voice and his presence,” Nettles said. “I aspire to reach that level of acuity in myself.”

He said that Morgan Freeman also inspires him because Freeman didn’t find work in acting until his mid-forties and didn’t get a professional offer until his mid-fifties. Nettles explained that he is always inspired to persevere in his goals because of Freeman’s success later in life.

“Don’t worry about ‘finding it,’ because as long as you work hard, you will find your moment,” Nettles said.

Nettles said that his passion for theatre is partially driven by what is called the “theatre buzz.” It’s the energy that performers talk about when they try to explain what it feels like to be. This “buzz” happens when an audience is present and absorbing the story from the actions and words of the performers, Nettles said. Nettles explained that it is like the audience is another character in the play that has been missing throughout rehearsal and has finally brought life into the play.

“Acting is honestly a high,” Nettles said. “There’s no better sound than the moment before the applause.”

Nettles said that moment before the audience’s applause as the best moment because they are still in awe of what they have seen, so much so that they are sometime unable to speak or clap.

As a proud Patriot, Nettles said he puts a high value on the small, intimate atmosphere at FMU. He appreciates the ability students have to work together regardless of major or year in school. He said that the recent performance of “Bestill” was only made possible because of the combination of talents in the art, theatre and music departments.

“At FMU, it’s much easier to collaborate and connect with other departments,” Nettles said. Theatre has given Nettles the chance showcase his talents of performing, directing and creating powerful experiences that inspire audiences, he said.

“I don’t go onstage to be recognized,” Nettles said. “It’s because I want the opportunity to show someone something they didn’t realize before about the world they live in.”