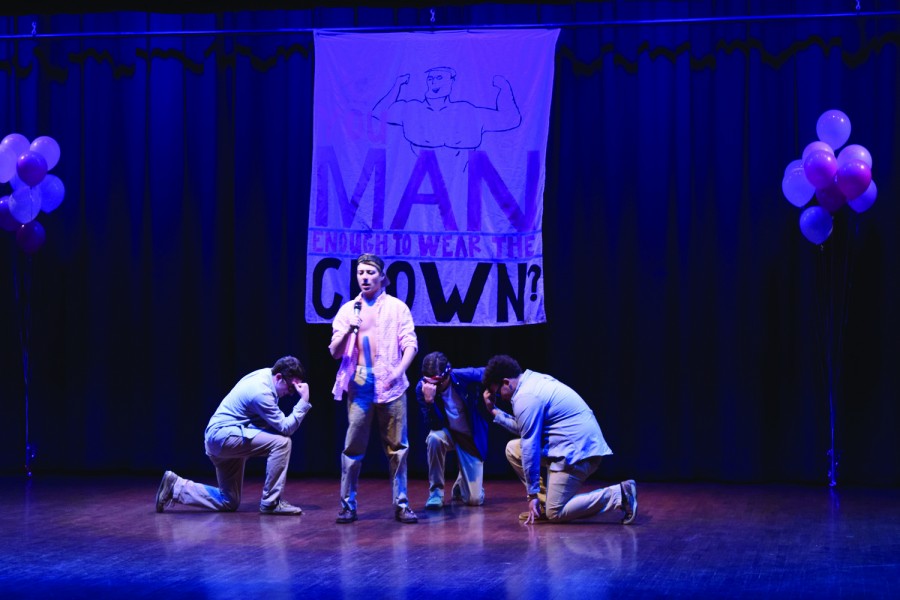 Chandler Sain lip syncs the Backstreet Boys song, “I Want It That Way” during the 2016 Big Man on Campus.

The 2014 winner for Big Man on Campus, Fernando Pinillos, gave out the sashes to the 2016 winners. Woody won the Sexy Legs contest, Kennon Strowd was the second runner-up and Brandon Rybak was the first runner-up. Cole Hinnant won Mr. Congeniality.

Sophomore pre-nursing major Gabby Ramos and freshman biology major Reagan Hansford hosted the pageant. Ramos and Hansford asked the audience trivia questions prior to the start of the pageant. If someone answered a question correctly, he or she was given another raffle ticket.

The pageant started with a dance performance including all seven contestants.

Following the performance, the “Mr. Sexy Legs” competition took place. The contestants all dressed in outfits that showed off their “sexy” legs.

The contestants then gave their individual performances. Taks showed his artistic skills by drawing a set of breasts and writing “Save Them” at the bottom. Rybak created his own rap, titled “F the BC.” Woody gave a ribbon performance. Sain gave a lip synced performance of “I Want It That Way” by Backstreet Boys with three backup dancers. Hinnant danced. Strowd played the ukulele while singing in a coconut bra. Turner finished the talent segment of the show with a song.

After the talent show, the “Most Inspirational Woman” segment took place. The contestants all wore dresses and explained who was the most inspirational woman in their lives and why.

“My mom is the most inspirational woman in my life,” Taks said. “If it wasn’t for her, I probably wouldn’t be here now, and I probably would have failed. She’s always there for me when I need her.”

Rybak said the most inspirational woman in his life was a friend of his named Matika Parker who is an Old Navy manager. He said she inspires him because she keeps her head up no matter how hard the situation may be.

The last segment of the event was the personal interview. The contestants had to pick a random card that had one question on it from a jar. Taks was asked how he would contribute to ZTA if he won.

“I would always help with the fundraisers and help raise money for programs such as this,” Taks said.

Rybak was asked to describe himself in one word. “Ridiculous,” Rybak said. “I’m participating in this event, and I do a lot of dumb stuff. Go ZTA.”

The theme of the event was “Think Pink.” All of the proceeds that were earned from ticket sales help fund mammograms, research and breast cancer education. Guests were given raffle tickets prior to entry.

Refreshments were available during the intermission. For every $2 spent at the food table, the person buying the pastry would receive an extra raffle ticket. There were short breaks in between segments of the events and door prizes were given to raffle ticket winners.