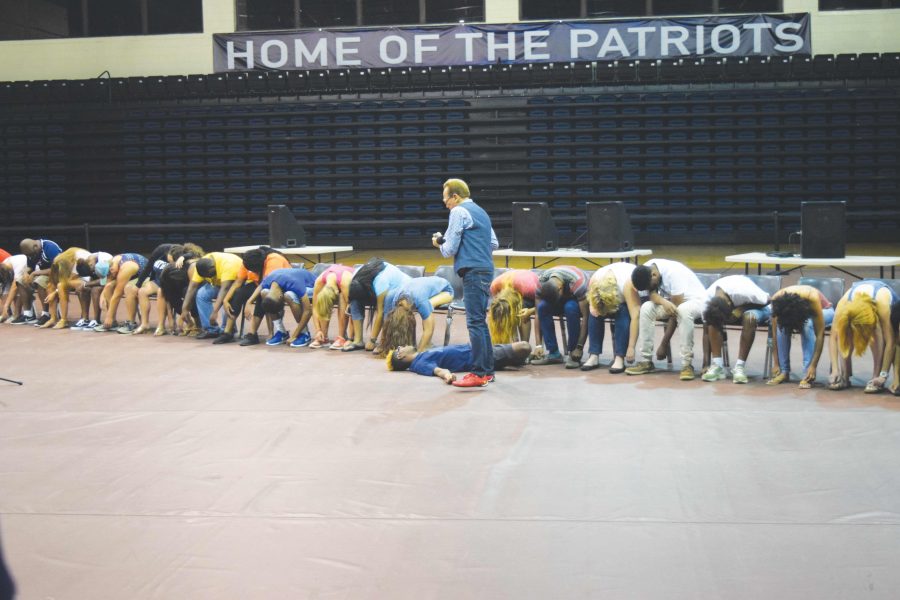 Dr. Wand tells senior Jordan Griffin to get off the floor while he is hypnotized. Students volunteered to be hypnotized at the show.

This year’s hypnotist show entranced students as Dr. Jim Wand hypnotized participants, and they had kissing competitions, butt dancing and even an “Olympic dance off.”

Wand is the founder and owner of Wand Enterprises and has performed his hypnotist shows at FMU for multiple years. In addition to performing on college campuses, Wand has appeared on television programs such as Discovery Channel and Comedy Central.

Wand not only hypnotized student participants called down to the front but also audience members who were just sitting in the crowd. At the end of his performance, Wand had all of the students who were on the floor exit out of the gymnasium in a conga line.

The assistant dean of student affairs, Dr. Daphne Carter-McCants, along with the Student Government Association (SGA) planned this year’s hypnotist show, which was held on Aug. 23 in the University Center gymnasium.

SGA Vice President Johnathan Greene said it takes about an entire summer to put the Welcome Week events together.