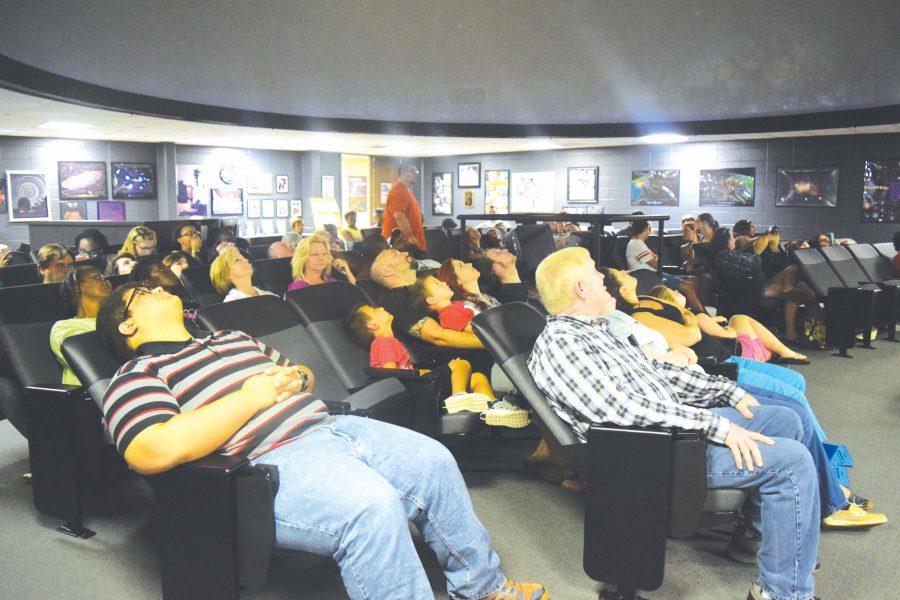 Students, faculty and members of the community sit back and watch “Amazing Universe” presented in Dooley Planetarium on Sept. 11.

The Dooley Planetarium presented the show “Amazing Universe,” a program explaining the universe and its celestial bodies.

Dr. Jeannette Myers, professor of astronomy and director of the planetarium, presented the show. Due to the large crowd, the planetarium offered an encore show at 4 p.m.

Myers said she originally created this presentation with several of her students for the NASA Deep Space Network more than a year ago.

The show began by taking attendees to the moon, viewing craters and places where previous space missions have landed. From there, the show continued to Mars, Saturn, Jupiter, Jupiter’s moons and beyond the galaxy.

The show also featured a planet that resides in a different galaxy. This planet is located in what is called the “habitable zone,” meaning the conditions are right for life to exist on that planet.

In addition to the several months it took to create the original presentation, Myers invested an additional three months to expand the show to be presented to the public. Myers added additional coding to the presentation and recorded the background music track.

“I think it was amazing to see all of the stars and how small we are in terms of the universe,” Ryan Singh, sophomore management information system major, said.

Myers said these shows are valuable to the community.

“When you are in the school, you hear a little bit about astronomy,” Myers said. “You only hear about planets and sometimes, but they don’t get to talk about galaxies and remnants of stars. It is kind of neat that they can come here and talk to us.”

These shows allow the community to explore space and learn about the universe.