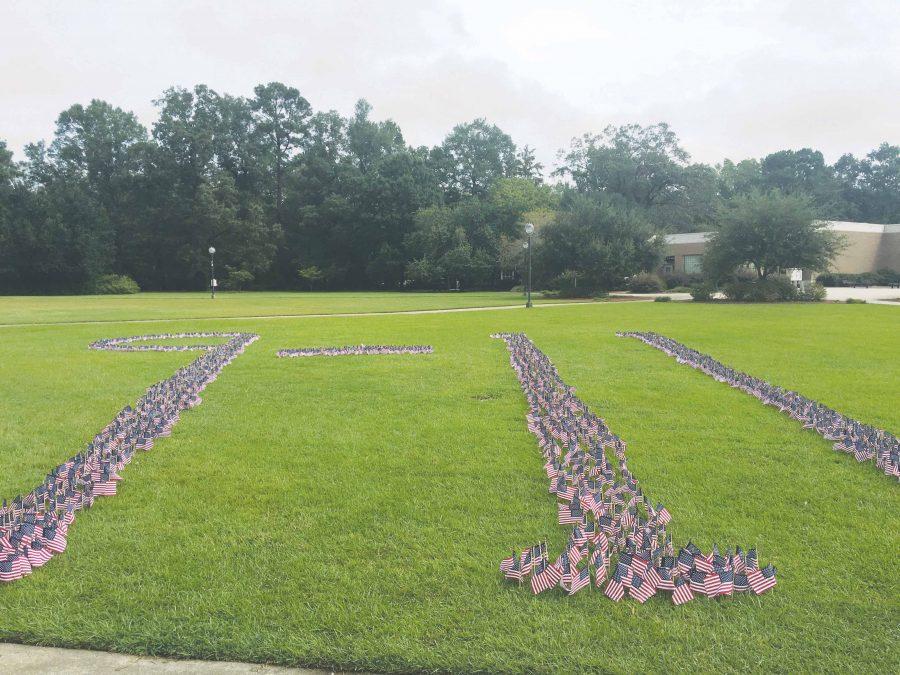 FMU’s Kappa Alpha Order (KA) held a remembrance to honor those who lost their lives on Sept. 11, 2001 on the lawn behind the Cauthen Educational Media Center.

KA held the event on Sept. 12, 2016 for the second year. The fraternity handed out small booklets of the Constitution and buttons that read “9-11 Never Forget.” The remembrance also included a flag display that was in the shape of “9- 11.” There were 2,977 flags placed in the ground to honor the 2,977 lives that were lost 15 years ago.

The KA fraternity suffered a personal loss in the attack, as six of their brothers died in the incident.

“We are gathered here to commemorate six lives of the Kappa Alpha Order that were also lost on that day,” Christian Burris-Durham, senior finance major, said. “We are here together to remember and pay our respects to those who lost their lives and to also give thanks to the servicemen who were out there on that day who saved so many people.”

This remembrance, though focused on 9/11, was also to honor other tragedies that have occurred prior and since the 2001 terrorist attack. KA displayed information from events such as the USS Cole attack in 2000, a US Ambassador being murdered in 2012 and the shooting in Orlando that killed 49 in 2016.

KA intends to make this an annual event.