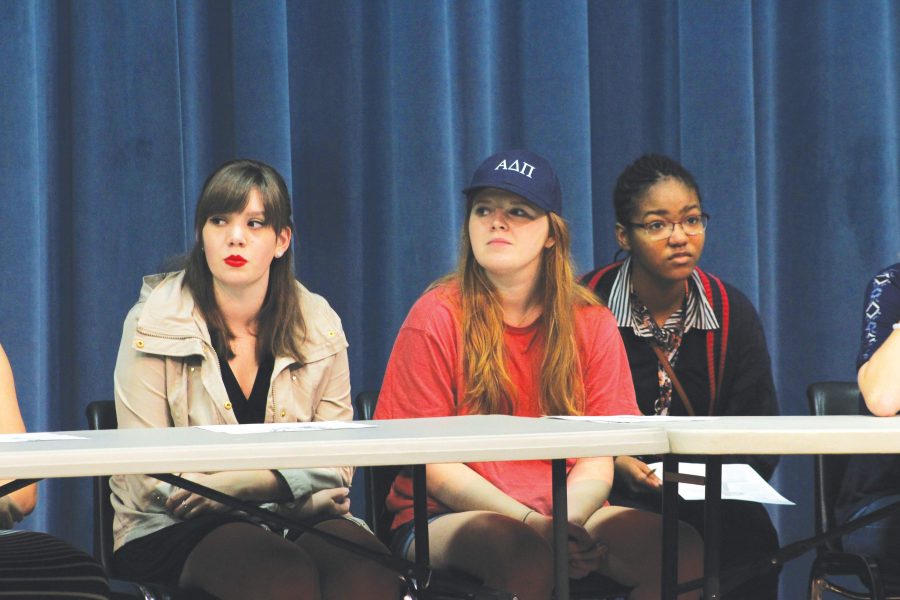 FMU students taking University Life 101 discuss hot topics in politics to help inform students of what to consider when voting.

Freshmen in the University Life (UL) honor’s courses this semester organized and led a political forum as part of their volunteer credit for the course.

On Sept. 22 in the Chapman Auditorium, FMU honor’s director Dr. Jon Tuttle began with an introduction of the political issues included in the forum. He discussed the goal of the forum, which was to inform students by summarizing multiple sides of each issue.

According to Tuttle, the UL professors and students chose issues that they believe directly affect and pertain to college students and campus life as a whole.

To present each issue, groups of two or three UL students discussed the republican and democratic perspectives as well as pros and cons to each issue. Following each presentation, the group opened the issue up for discussion with the audience members.

According to the presenters, the democratic view opposes, allowing concealed carry on college campuses. Their goal is to make guns harder to get through stricter background checks in order to make society safer. They said that the republican view supports the right to bear arms on campuses through the belief that students should be able to defend themselves.

During the discussion, students debated the pros and cons of allowing concealed carry on FMU’s campus. Some students said they believe it is unnecessary, citing reasons such as the FMU police department keeping students safe. Others argued that they would feel safer if trained and licensed individuals could carry their guns.

The final group discussed voter identification laws, which they said were chosen because during a presidential election year the issue is receiving extra attention.

The presenters said that the issue entails a disagreement about how strict voter identification laws should be.

According to the presenters, 21 million Americans do not have identification for various reasons. They also cited that approximately 40 percent of Americans do not exercise their right to vote.

Other students argued that since it can be harder for people from low-income areas, minorities and the elderly to receive the proper identification, the law unfairly prevents these people from exercising their right to vote.

FMU students also said that since they are adults with many opinions on the government and how it affects students, they should vote and let their voices be heard.

Another issue that the panel discussed was free tuition and financial aid for college students. Presenters gave numbers showing how much the average tuition costs and how many students receive financial aid, both federal and other.

The presenters added that the overall purpose of the UL honor’s political forum was to encourage college students to exercise their right to vote. Providing background on current political issues and beliefs held by the major parties will hopefully make FMU students better, informed voters.

Tuttle closed the program by reminding the audience of the upcoming second part to the UL honor’s volunteer service component, which is setting up tables around campus to register the FMU community to vote.

After the forum, Tuttle added that these are events that honors UL students should participate in, but the political issues forum may not be held again until the next presidential election.