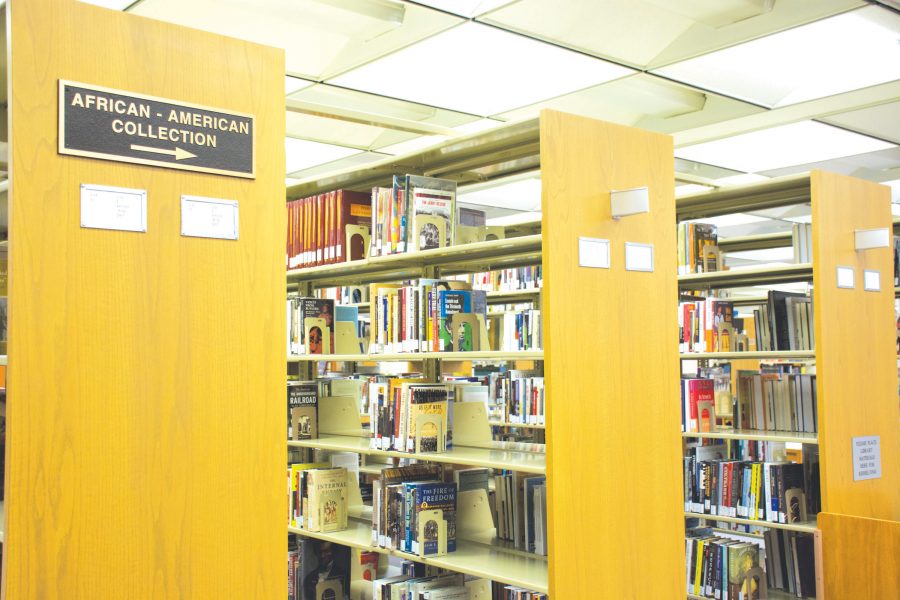 Rogers Library works to expand the African-American Collection to accommodate the new program on African and African American Studies. The library currently has approximately 3000 titles, but they hope to continue to add more as the program grows.

The new African and African American Studies (AAAS) minor and collaterals will begin next semester after being in the works for years.

At the end of the spring semester, FMU faculty and staff voted to add the new AAAS program to the catalog. This semester, program coordinator Joyce Durant and Jason Owens, an English professor, have been vigorously planning for the program to kick off in January.

Not only will the AAAS program teach students about the history and culture of African Americans, but also the program can be applicable to students in almost any field.

“You’d be amazed to find how many scholars and thinkers and businesspeople, politicians and celebrities, athletes majored in African- American studies,” Owens said. “With these kinds of degrees, they almost function as any kind of humanities or social science

This program is open to all students, Owens said.

“It’s not just open to black students,” Owens said. “All students are encouraged to be involved. I think black studies is about community.”

The first class in the AAAS program is a 200-level survey course. It will discuss the history, literature and arts of black studies, as well as researching and engaging with different aspects of culture.

The whole program is interdisciplinary, pulling from economics, sociology, history, geography and English, and class sizes are expected to be about 25-30 students.

Owens said being interdisciplinary is a great thing for juniors and seniors who are interested in joining the program but who worry about having to stay an extra semester. Durant wanted to remind students that even though they may have to change their plans, a lot of the classes they may have already taken. Another important thing to remember is that the program will be expanding throughout the years.

“This is just the beginning,” Durant said. “More courses will be developed.”

Owens said that he already has ideas for classes that could be added to the program, depending on student interest.

“I would like to do a course in Critical Hip-Hop Pedagogy,” Owens said. “That’s understanding rhetoric, voice, dislocation, location of politics, the dynamics of hip-hop culture and rap music. It harkens back to other forms of expression as well, so we see the currents of black music and black tradition coming through hip-hop culture.”

Another course Owens said he’d like to teach is Black Masculinities, which would look at understanding the struggles that black men face, their challenges and triumphs.

“In some ways, black men don’t control their own image,” Owens said. “Media representations, what’s in the news, and what’s being projected makes it sometimes difficult to have your own voice. We would also look at black feminism, or womanism.”

To prepare for the new program, Durant, who is also the dean of Rogers Library, has spent time expanding the African- American Collection so that students could use it as a resource. The collection was started five years ago and currently has more than 3,000 titles. Durant also said that this past February the collection was dedicated to FMU’s President Dr. Fred Carter because he inspired the collection to be started. Another unique aspect of this program is that it won’t be all on campus.

“Black studies, as it was developed, was intended to be an outreach for communities,” Owens said. “I would imagine as the years go and the program grows, there would be outreach into communities to make connections and understand the Pee Dee and South Carolina.”

“We have to have a broader picture to represent African-American culture,” Durant said.

Because of Owens’ history with teaching AAAS programs and presenting on the subject at several conferences, he came to the project with a list of books that may benefit students who want to know more about what’s being talked about in class.

Owens said that the collection was already strong before he gave suggestions, but his suggestions will allow the library to offer more information on a variety of more subjects than were offered before.

“With the list that Professor Owens gave us, we are able to work diligently on that. So when the students are in the courses and he’s talking about a given subject, they would have had an opportunity to come here to borrow some of the books.”

Durant said that the library is adding books to the collection daily.

Information about the AAAS program is already in FMU’s 2016-2017 catalog, and any student with question about the program or how to get started in it can contact Owens in his office, Founders Hall 120, or by phone 843-661-1512.