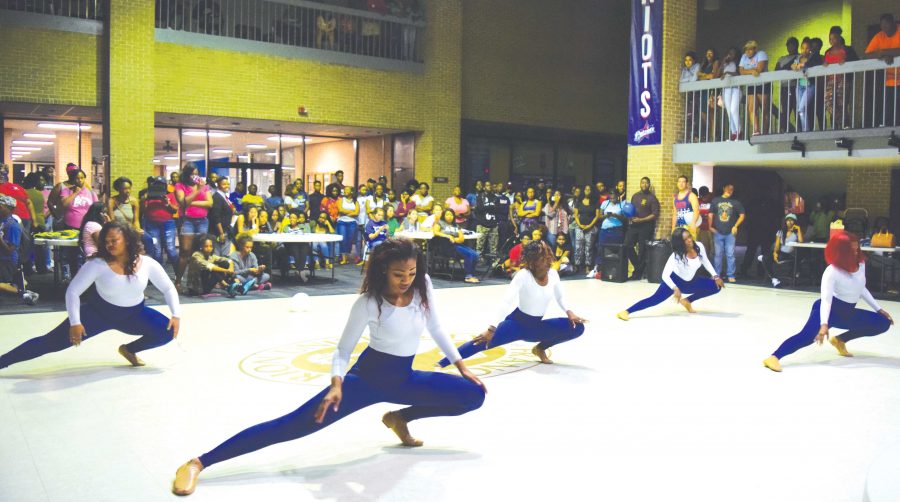 The Dimensions of Diversity dance team performs at the meet and greet. DoD started in 2002 to help girls be expressive.

An FMU dance team, Dimensions of Diversity (DoD), sponsored a meet and greet, including icebreaker activities, a dance-off and performances.

According to senior management major Breanna Minus, who is also DoD vice president, the purpose of the meet and greet was to bring the student body out for a night of entertainment and games, as well as let students get to know the dancers.

To kick off the event, each of the DoD dancers gave short introductions. They described who they are and explained what DoD does during the year.

The team then introduced icebreaker games which were a balloon tower contest and “two truths and a lie.” There were tables at the event, and each table was asked to participate. The groups were encouraged to get to know one another and make new friendships.

Next, the team announced that there would be a balloon-popping relay race, which freshman nursing major Mesjay Bostick said she enjoyed. Bostick came to support friends who are on the dance team and was impressed with the turnout.

“I didn’t expect so many people here,” Bostick said. “It’s good to see support for my friends like this.”

The DoD dancers announced a dance-off and asked for participants. The winner of the dance-off, Brandon Nelson, sophomore business management major, won a $25 Wal-Mart gift card.

Nelson said he was excited to receive the gift card for his dancing and that, as a college student, he had good use for it.

The DoD had fraternities, such as Omega Psi Phi dance. According to Minus, the purpose was to showcase different types of dance than DoD’s typical styles to express unique approaches to dance.

Finally, DoD performed several of their dances, the styles of hip-hop and jazz. Minus said that the dances the team did at the meet and greet are similar to the ones they will be doing throughout the semester and that she hopes the student body comes out to support them during the year.

Mary Fountain, a junior graphic design major, said that although she is not part of the team she was hoping to see more diversity on DoD this year.

“I was really hoping for more diversity this year,” Fountain said. “It would be good for the team to get ideas from all types of people.”

Minus said that the team was founded in 2002 with the purpose of giving girls an outlet to expressive themselves through dance that is enjoyable and positive.

Minus said that the dancers perform mostly in the genres of jazz, hip-hop and ballet.

“As Dimensions of Diversity, we attempt to live up to our name and try all genres of dance,” Minus said.

Minus said that the team supports athletic teams throughout the year and entertains the student body at multiple events on campus. They also perform at DoD-sponsored events and will perform at Carnevil this year.

Minus said that DoD has been working on branching out and dancing for more events.

“We have been approved for more basketball games this year, which has been our biggest goal,” Minus said. “We would like to be involved in Sea of Red and off campus events hosted by the university.”

FMU groups and programs can request that the dancers perform at their events by asking Minus, as well as by going through Dr. Erica James, DoD’s advisor and FMU assistant professor of psychology.