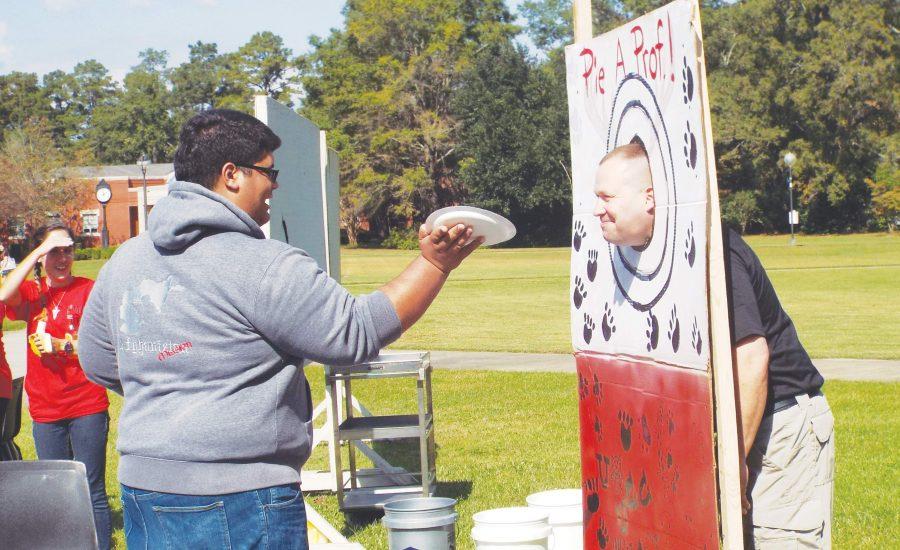 FMU Pre-Vet Club hosted its annual “Pie a Professor for Pets” fundraiser to raise money for animals in need of homes.

The event took place from 2-5 p.m. on Oct. 20 behind the Cauthen Educational Media Center (CEMC).

One student, freshman engineering major Wesley Segarra-Martinez, said that he enjoyed participating in the event. He came back to the CEMC lawn multiple times to pie professors as they changed shifts and was attempting to pie every faculty volunteer.

“So far, I’ve gotten to pie eight professors and the chief of police,” Segarra-Martinez said. “I think it’s just a fun event, and it’s for charity, for a good cause. So, I don’t have to feel bad. There’s no harm.”

Segarra-Martinez said there was something gratifying about throwing pies at faculty members. He said that he rubbed the pies in their faces slowly and carefully so that he could get his money’s worth.

Segarra-Martinez said that he really cares about animals, so the purpose of the event was important to him. He said he has had many pets, including one one dog he got from an animal shelter that had been abused. He said he wants to help take care of animals.

Professors from multiple areas of study came together to volunteer. Departments such as math, biology, English and modern languages each had faculty members who allowed students and faculty to throw pies in their faces in order to benefit animals.

Desiree Jones is a junior biology major and public relations officer for the Pre- Vet Club. She said that the club members discussed which professors would be ideal participants—or which professors students would be most likely to pie—and asked them to participate.

Professors who were not being pied also found ways to contribute. Dr. Jennifer Kunka, professor of English and associate provost for advising, donated money for students to pie professors because animals are important to her.

Pie tosses were sold for $1 for a 5-foot throw or $5 for a 1-foot throw. Students said they combined their money to purchase closer throws to ensure that professors would be pied.

Jones said there were at least five students at the fundraiser at all times and that she was pleased with the participation of the student body.

In total, the Pre-Vet Club raised $261. According to Dr. Tamatha Barbeau, associate professor of biology and coordinator of the pre-veterinary program, the Pre-Vet Club received $71 in donations before the fundraiser officially began.

“The event was very successful,” Jones said. “In my opinion, the event was such a success because it’s just a lot of fun and full of laughter.”

Jones said that she believes when people come together to support a charity, things have a more positive tone.

All proceeds from the fundraiser benefitted the DogGone Shelter Intervention of Latta, S.C.

DogGone Shelter Prevention sent a shelter representative, Brad Waters, to attend the fundraiser and spread the word about what their organization does.

The Pre-Vet Club has chosen to sponsor DogGone Shelter Prevention during the fall semester through their fundraisers and outreach projects, according to Jones.

According to their website, DogGone Shelter Intervention’s mission is to intervene when there are animals being surrendered to their local animal shelter. Often, families have situations in which they are unable to keep their pets, and these pets frequently do not do well in shelters and often become depressed.

According to the website, the organization steps in to make sure those pets are not abandoned in lonely cells.

“This shelter, in particular, had played an instrumental role in helping transport animals from shelters such as the Darlington and Marion shelters to foster homes around the state and often out of state,” Barbeau said.

Barbeau said that the shelter has worked hard to take care of animals that have been displaced by Hurricane Matthew and flooding shelters in their area.

Hurricane Matthew has affected the plans of the Pre- Vet Club for the fall semester by making them aware of the needs of local shelters that have experienced flooding and other issues. According to Barbeau, the staff from these shelters are overwhelmed and need as much help as possible.

The Pre-Vet Club is holding a supply drive for the shelter on campus through Oct. 28. Donation boxes are located in various department offices.