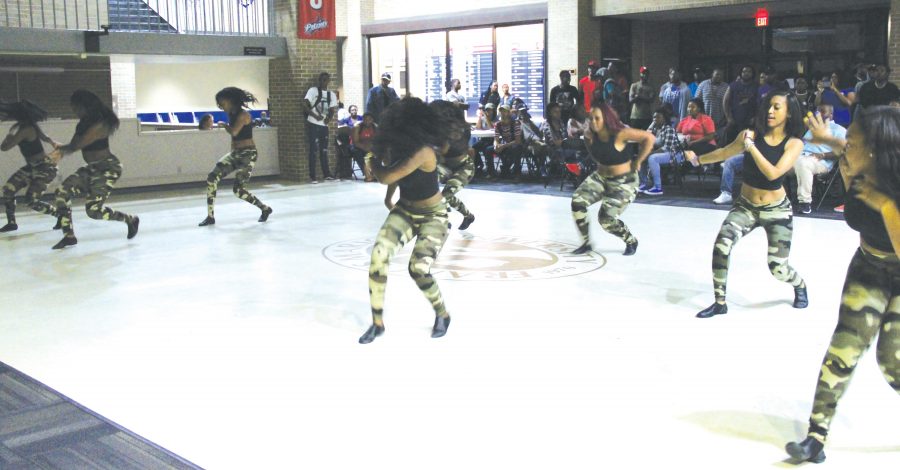 Dimensions of Diversity and Project Dance performed at the NPHC dance party.

FMU National Pan- Hellenic Council (NPHC) sororities and fraternities hosted an NPHC Party to bring students together for a night of fun.

Hanna said that the main purpose of the event was to create a space in which students could mix and mingle with members of each of the seven participating groups. She said that her role in the event was doing a little bit of everything, since the NPHC groups split the responsibilities evenly. Each group put forth promotion efforts for the event.

“I believe that the event was quite successful due to all the promotion that each member did,” Hanna said. “We worked hard and the students really appreciated that.”

Organizers of the party said that they asked FMU dance teams Dimensions of Diversity and Project Dance to perform at the event to showcase their talent as well as to hype up the crowd.

“We don’t have that many events on campus where the whole purpose is to have fun,” Barnes said. “Extracurricular activities to have fun are important, especially during the stress after midterms and Hurricane Matthew.”

One dancer, freshman biology major Charday Sparks, said that Project Dance’s goal for their performance was to help the crowd get into the party and enjoy the night.

“The purpose was to gather all the students at FMU in an attempt to build new friendships, showcase our Greek life and our talented dance teams all through one common interest: dance,” Sparks said.

“[Dance] allows one to express emotion without words and no matter what you do, any sort of movement in dance is seen as a piece of art as long as you are confident in what you’re doing,” Sparks said.

Sparks said dance is something that brings people together and allows you to make a complete fool of yourself for fun, she said.

This dancing and having fun often inspires lifelong friendships, which Sparks said is the goal of events such as this.

“People are still talking about the dance teams as well as how much good, clean fun they had at the party,” Sparks said. “Many have suggested we do it again.”

Dancing can be an empowering activity, according to Sparks. She said that she can do the same moves as male dancers and is able to land difficult hip-hop moves.

“I believe dancing allows us as women to express our versatility and proves that we can do anything,” Sparks said.