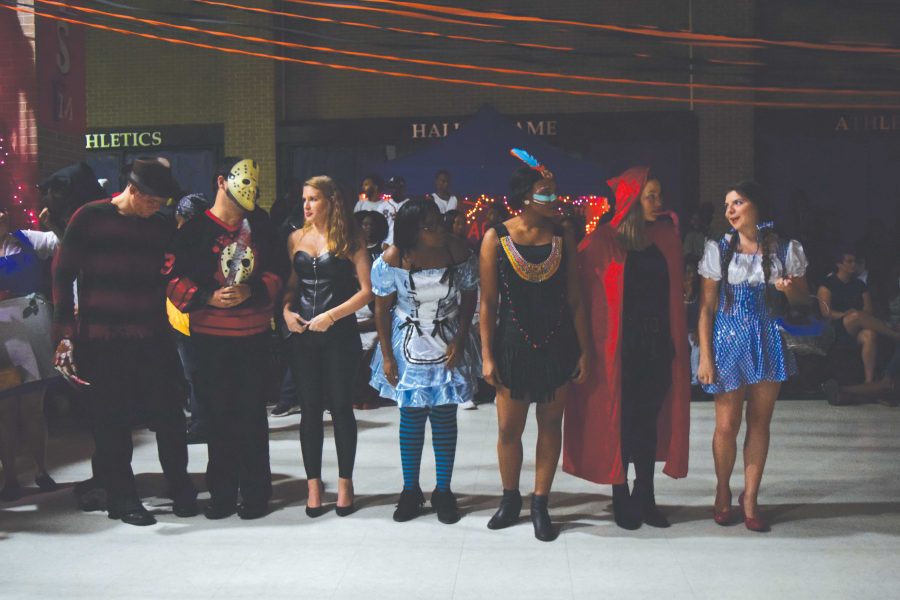 Students wear Halloween costumes to participate in the costume competitions at CarnEvil.

Students showed their Halloween spirit at the annual CarnEvil event.

The event was sponsored by FMU Diplomats with the University Programming Board (UPB) and Student Government Association (SGA). More than 400 students came out, wearing Halloween costumes.

CarnEvil is difficult for one organization to plan alone. The FMU Diplomats, who took on the majority of planning responsibilities, paired up with UPB and SGA to offset the work load. Plans for refreshments, music and decorations began a month and a half prior to the event.

This year’s event was FMU graduate Franny Robinson’s first time being over the CarnEvil preparations. Robinson is a Student Services Counselor in the Office of Admissions.

“This experience is really fun; it’s fun to be able to see things from a different perspective,” Robinson said. “I was just a student back in May, and now I’m on the staff and working with students. It’s kind of a weird role switch, but it’s interesting to see how things happen now.”

However, Robinson also said there was one issue in planning the event.

“Once we got help from UPB and SGA, funding wasn’t an issue,” Robinson said. “I think the only actual roadblock we had was when we ordered with Wal-Mart, and the package got lost. However, because it wasn’t just us putting on the event, it was all taken care of the same day.”

There was a costume contest with three categories: the best costume pair, the scariest costume and Mr. and Ms. CarnEvil.

The contest’s goal was increased student attendance and participation. Those who participated tried to show their creativity.

The winners of the contests were chosen based on costume creativity and audience enthusiasm.

James Shoup and Taylor Grey who dressed up as Jessie and Woody from “Toy Story,” won the duo contest. Deja Fludd who dressed as the exorcist won the scariest costume. The winner of Ms. CarnEvil was MaQuitta Butler; she dressed as Pocahontas. Richard Brocking, who dressed as Slick Rick the rapper, won Mr. CarnEvil.

Refreshments were provided at the event and included sweets, dips and other finger foods for students to enjoy.

Robinson said that there is something special in store for the next CarnEvil in the fall of 2017. There currently isn’t a set theme, but Robinson said it will be bigger and better than the last.