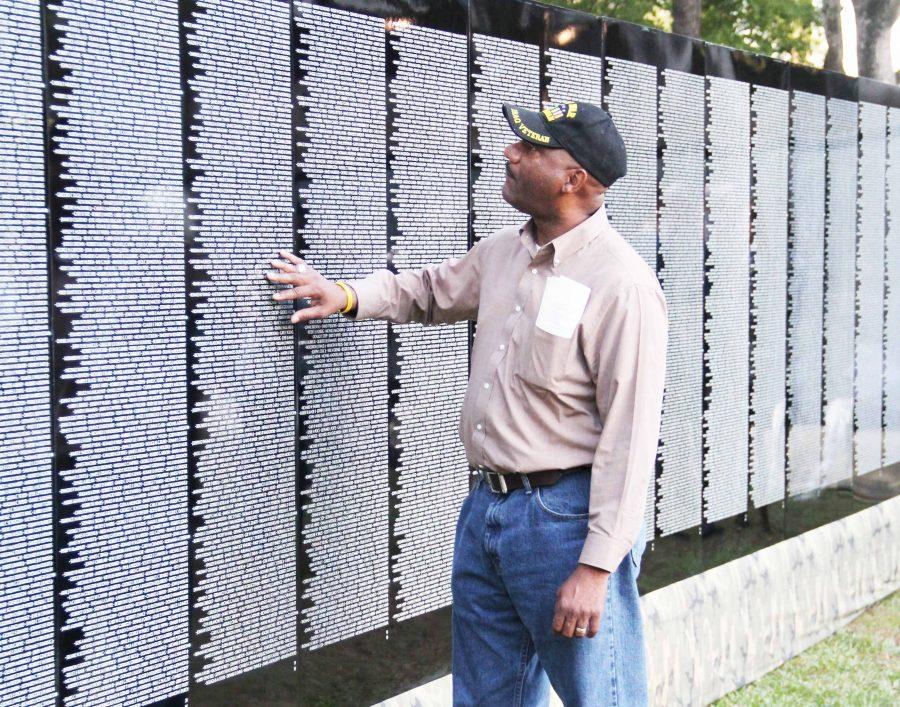 Veterans of the Vietnam War visit the wall throughout the week, searching for names of fallen comrades and loved ones.

FMU welcomed The Moving Wall Vietnam memorial to campus in an opening ceremony on Oct. 27.

Dr. Jon Tuttle, director of the honors program, orchestrated the event. He is currently teaching an honors colloquium on the Vietnam War.

“There are many people who have never and may never get to see the actual Vietnam Veterans Memorial,” Tuttle said. “It occurred to me that having The Moving Wall visit campus would be great for class and for everybody else in the community.”

Gen. James Livingston, a Vietnam War Medal of Honor recipient, gave the address for the ceremony.

“We are here today to commemorate the duty, the patriotism and most of all the legacy of all those brave men and women who served our nation during the Vietnam War,” Livingston said. “This wall is really a legacy of that service and sacrifice.”

During his address, Livingston recounted some of the events and experiences he had while he was serving in Vietnam. He thanked the Vietnam veterans for their service and their families for the sacrifices they made at home. Honoring those who served and those who paid the ultimate price by giving their lives was a major part of Livingston’s message to those gathered for the ceremony.

Livingston said not only was the service in the field important, but also the treatment the veterans received when they got home. According to Livingston, veterans weren’t treated well when they returned, but they worked to earn respect as veterans and changed the way the U.S. welcomed its soldiers home from the front.

“It’s a very moving, very solemn memorial to those who died in one of our most complex and controversial wars,” Tuttle said. “It’s our way of acknowledging Vietnam veterans who were not given the respect that they were owed upon their return. The fact that there are more than 58,000 names on that wall gives you a sense of the scope of America’s loss.”

FMU’s president Dr. Fred Carter said he thought the design of The Wall was strongly debated when it was originally presented. He said as a veteran himself, he was used to memorials similar to the Iwo Jima memorial in Arlington, Va. He wasn’t sure about the design at first, but it has since grown on him.

“There’s a curious thing about The Wall,” Carter said. “When you read a name on The Wall and you stand at a slight angle to The Wall, you see yourself reflected.”

Carter said he believes that was the intention of architect Maya Lin.

“I think it’s clearly the architect’s intention to bring the viewers into the memorial and that people would not be apart from the memorial but that the person viewing it would feel very much a part of The Wall,” Carter said. “I think that’s what occurred with many of our students and many of our guests who strolled along the wall.”

Several students and members of the faculty attended the ceremony to hear Livingston speak and see The Wall in person.

“It helps reinforce the fact that that part of history is not lost, that the soldiers’ sacrifice isn’t lost,” Anna McCarley, sophomore prenursing major, said. “The Wall is making the effort to not only remind people in general by going from place to place, but it connects with different generations by having it here on campus. It’s one thing to read about something; it’s another thing to have veterans right there with students and to understand what they sacrificed for future generations.”

Tuttle said he worked out the logistics and presented the idea to Carter during the spring semester in 2016.

“President Carter was very supportive from the moment he heard about it,” Tuttle said. “Everyone on campus has rallied around the project.”

According to Tuttle, the grounds and physical plant crews were essential in preparing for The Wall by building a platform for The Wall to set on as well as a stage for the ceremony and a mount for the flagpole.

Additionally, FMU’s ROTC stayed with The Wall each night, sleeping outside to protect The Wall. Tuttle said the group volunteered.

According to themovingwall.org, The Moving Wall is half the size of the actual Vietnam Veterans Memorial in Washington, D.C., and has been on tour across the U.S. for more than 30 years.