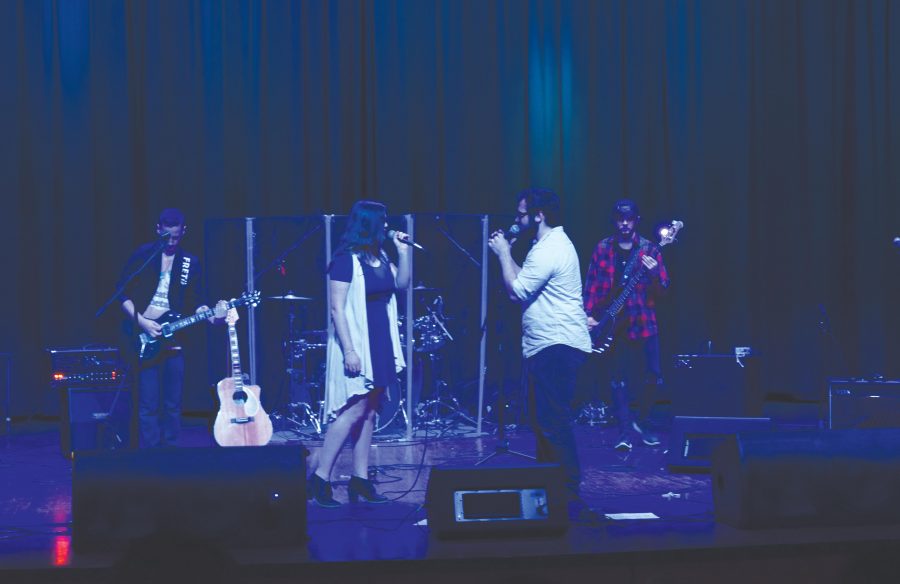 The Music Industry (MI) Ensemble has played two out of a three-show tour, bringing music to the people outside of the Performing Arts Center (PAC). The first was in Chapman Auditorium, and the second was in Ervin Dining Hall (EDH).

“This is the first semester that we haven’t performed at the Performing Arts Center,” Goff said. “It’s a great facility that requires so much work to get in and out of; it’s challenging, and I’ve learned over the past few years that people can be intimidated by going to shows at the PAC. It actually doesn’t draw people in like we want it to.”

Goff said that many students didn’t know the MI Ensemble existed, and through holding the first concert in Chapman Auditorium, more students showed up for the performance.

“I decided to take the show to the students,” Goff said. “We wanted to come to them as opposed to them coming to us.”

The tour consisted of two concerts on the main campus. The final concert will take place in downtown Florence for the FMU Winter Fest on Dec. 2.

All bands playing at the FMU Winter Fest are led by FMU students. The music festival will conclude with the MI Ensemble’s final performance of the semester.

This year Goff split the MI Ensemble students into two bands so students could have stage experience as well as technical experience. This semester was the first semester there were enough students to have two full bands.

“I thought it would be fun to have smaller groups while the other group manages the lights and sound for the group that is performing,” Goff said.

Goff said that having two bands perform at the MI Ensemble was like having four classes within one ensemble.

According to Goff, the structure of MI Ensemble worked better having two bands performing.

For each performance, performers had to change set lists and adjust stage set ups to accommodate the venue.

Each band was in charge of picking set lists, learning and performing songs and managing lights and sounds for the other band.

Seniors Caroline and Geoffrey Starling performed together for the first time since their June wedding.

“It was fun just to be really, really comfortable with the person you’re singing with because, you know, if you feel like they’re a stranger but you’re supposed to interact, it’s a little awkward,” Caroline Starling said. “Like, with Geoffrey, we’re best friends, and we’re married. So, we can just interact and move around freely as we choose.”

According to Matthew Sanders, freshman music industry major, the concert in EDH required adjusting volumes to make sure the sound was balanced. There fewer microphones and no monitors used in the second concert, Sanders said.

For senior biology major Jordan Griffin, the fall MI Ensemble gave him a chance to gain comfort singing in front of an audience.

“MI Ensemble is more of a personal class,” Griffin said. “I’ve been in concert band and stuff like that since high school, but MI Ensemble was the first time it was more of like a band setting. You were more thrown into the spotlight. You can’t really hide from the crowd.”

Griffin said the concert in Chapman Auditorium allowed the performers to have a good time while connecting with the audience.