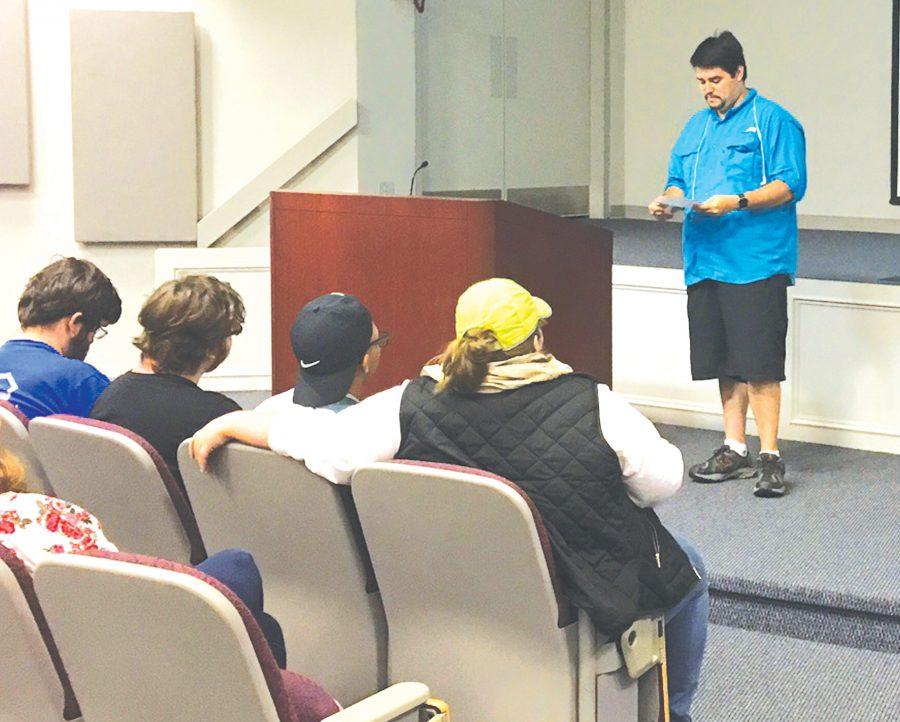 Mitchell Aldaco reads his original poetry at the poetry slam. Aldaco won second place in the competition and received a $5 gift certificate to Barnes and Noble.

Snow Island Review (SIR), Sigma Tau Delta (STD) and FMU Gay-Straight Alliance (GSA) partnered to host a poetry slam open to all students to share their poetry and performance skills to their peers.

“Competing was a rewarding experience that took me out of my comfort zone,” Simmons said. “It allowed me to share something personal with my peers.”

Lind also stated that the slam was an opportunity for her to become more comfortable with reading her work in a public setting.

Brown won first prize, which came with a $15 Barnes and Noble gift card. She was also the winner of the People’s Choice Award, an award voted for by the audience members present at the slam. Brown will receive honorable mention in this year’s edition of the “Snow Island Review,” an artistic and literary journal, without having to go through the traditional submission and acceptance process.

Brown said that it felt good to win the poetry slam, as this was the first time that she had performed her poetry in front of other people.

Aldaco was the second place winner of the poetry slam. He received a $5 gift card to Barnes and Noble. “I am grateful,” Aldaco said. “I am glad people came out to read.”

Four judges used a point system to decide the first and second place winners. Three of the judges were representatives of the three organizations involved in planning the slam. The fourth judge was a volunteer from the audience.

The second session of the poetry slam consisted of poetry reading. There was no competition component to this session. The organization asked students to read poetry whether it be their own work or their favorite piece of famous poetry. Several students participated in this part of the slam. Most students read their own work, but two people read poetry from Maya Angelo and Sir Henry John Newbolt.

Students who attended the slam said that it was an interesting and unique opportunity to hear the work of their peers.

“It was amazing to see people’s different perspectives on life and how they express themselves through words and to come out and support my fellow Patriots,” Mary Cline McKnight, freshman art education major, said.

This semester’s poetry slam was the first time these three organizations partnered to host a poetry slam.

“Poetry is a form of expression, and GSA is all about people expressing themselves,” Moton said. “All of our meetings are about you coming in and you expressing how you feel about specific subjects. I feel like partnering up with Snow Island Review and Sigma Tau Delta to do a poetry slam allowed some of our members to actually speak on things as an outlet. This is a comfortable setting for them to express themselves with no judgment.”