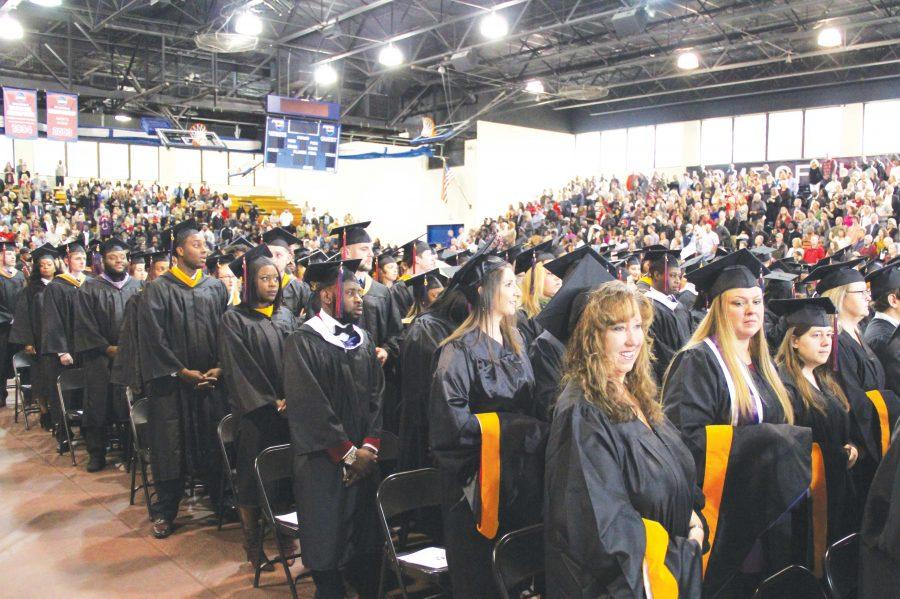 Soon-to-be graduates stand as each row approaches the stage to receive their diplomas. Students holding their hoods in their arms rather than already wearing them are graduate students.

In addition to receiving an honorary degree, Sheheen delivered the commencement address. Sheheen asked FMU graduates to always remember who they are, where they came from and who helped them when they embark on their new journeys as college graduates.

“We have nothing to fear but fear itself,” Sheheen quoted of Franklin Roosevelt. “Nameless, unreasoning, unjustified terror.”

Sheheen said that he believes today is the most glorious time in history, and that graduates should not let their fears hold them back from success.

Sheheen left the graduates with three pieces of advice. The first was not to be afraid, but to conquer hate with love and fear with humanity. Next, he advised the graduates to always join some sort of community and belonging in the world as they are leaving the school community. Finally, Sheheen told graduates to take risks because risks are how the graduates will make great gains.

For one new FMU alumna, Ashley Poston, Sheheen’s advice is already a part of her life. College for Poston was about more than just earning her degree in early childhood education. She dedicated her time to her higher education out of love for her young daughter and chose a career in education to benefit her.

Poston’s desire to study early childhood education stemmed from her experience as a young mother researching children and milestones they reach.

“Watching my daughter grow for the first few months inspired me to want to be a teacher,” Poston said. “I wanted to be fully educated in order to help my daughter succeed to her fullest potential.”

For Poston, getting through college was a tough balance of academics, parenting and balancing multiple jobs. She said that looking at her growing child each night and the support of her friends and family gave her the determination to succeed in her education and in her life.

“Through my walk in the education program at FMU, I found my love for education and student success grew even deeper and allowed me to become passionate about every aspect of students and learning,” Poston said.

Poston said that FMU has provided her with the skills to be the best teacher, mother and person she can be. She said that all the students who are struggling to balance their responsibilities should know that it is worth it.

The fall commencement ceremony marked the first graduates from a recently implemented degree program at FMU, healthcare administration. Twenty-seven FMU students received degrees in healthcare administration at the ceremony. According to FMU’s press release, these graduates represent the university’s health and medical education programs, which are continuing to grow.

Among these was alumna Breanna Robertson who said she chose the degree because its flexibility allows her to work in the growing healthcare field with opportunities for both bedside care and professional administration positions.

Robertson said that before graduation, college seniors are faced with many challenges and plans can often fall through. Now that she has her first job in place, her advice to FMU seniors is to prepare in advance for these new experiences because the time passes by faster than expected.

“Graduation for me was simultaneously unsettling and exciting,” Dew said. “It left me feeling awesome that I’ve made it this far, but left me wondering what’s next.”

For Brittany Bradley, a nursing major, she felt proud of what she accomplished. “Graduation was very surreal,” Bradley said. “It seems like the last three-and-a- half years, all I thought about was graduation, and it was finally here. All of my hard work finally paid off.”

Bradley will work at McLeod Regional Medical Center as a labor and delivery nurse, and she will take the NCLEX shortly after graduation. As she leaves FMU, though, she takes with her several memories.

“When I think about my time at FMU, I think mostly about the incredible friendships I made that I know will last a lifetime,” Bradley said. “I think about all of the late nights, study sessions and tears I shed, but also how they led me to where I am today. It was all worth it.”

Sociology major Thomas Brown said his walk across the stage was bittersweet.

“I have been at FMU three-and-a-half years, and for three years worked at the media center,” Brown said. “So it felt like I was leaving two things instead of just FMU. It’s exciting though, to finally get my degree.”

Brown said the people at FMU were who he’ll remember.

“I think about the people, like the media center worker, and how they became like family,” Brown said. “Some of my professors told me to add them on Facebook because they wanted to keep in touch.”