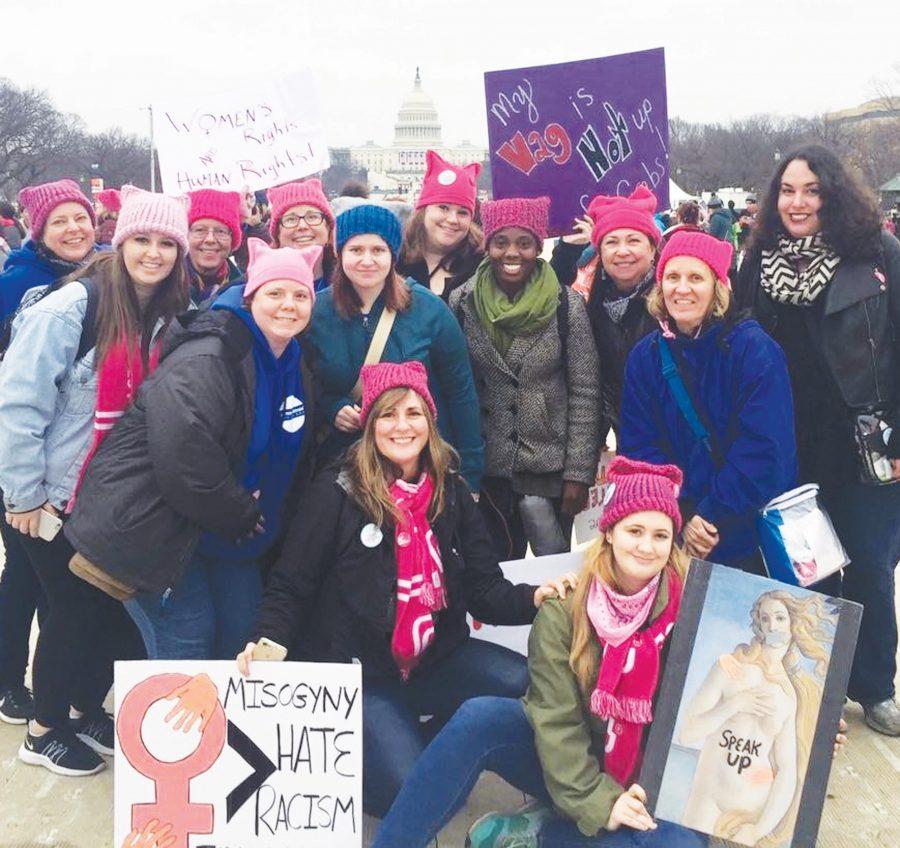 FMU faculty and students joined the more than 400,000 people advocating for women’s rights and gender equality and empowering one another in Washington, D.C.

Eight FMU professors took an overnight charter bus with 24 other people from the community to attend the march to show their support for women’s rights and equality.

According to Dr. Elizabeth Zahnd, professor of French, the idea for the bus came from a group of 12 Florence women who met in a professor’s home to discuss concerns over human rights and the environment under the new administration the weekend after the presidential election. The group formed Action Together – Pee Dee, an activist group, meeting to support women’s rights of all races, religious backgrounds and sexual orientations.

FMU English Professor Dr. Meredith Love said in the beginning the group only consisted of a few people.

“It started with a few of us who knew, right when we heard about the march, that we had to go,” Love said. “We talked about a few of us piling into a minivan and staying with my husband’s aunt and uncle. Then we found out that more and more people were interested. The next thing I knew I was on the phone with a bus charter company setting up an Eventbrite to manage attendees.”

Love said that being at the march was an exhilarating feeling.

“I’ve never experienced anything on this scale,” Love said. “I remember feeling this same kind of solidarity when we did the ‘Vagina Monologues’ and coordinated V Week activities at FMU several years ago. However, I have never stood with so many people for a cause, in the same place, at the same time. When we shouted together, you could feel the voices as one thunderous voice in the city. It was amazing.”

Love was inspired to go to the march as a result of hateful messages that have been spread and dismissed easily.

“I teach rhetoric and gender studies and writing,” Love said. “I’m always thinking about how messages are constructed and how words have consequences. I was pretty depressed about the fact that words seemed to be losing all meaning, that people in power could say hateful things and that the public was willing to dismiss messages so easily.”

After leaving the march, Love said that she is ready to be more of an example of a thoughtful and active citizen for her children and students.

For Zahnd, marching in Washington, D.C., was a chance to show her support for women’s rights with others as well as take part in democracy.

“I decided to participate in the Women’s March on Washington because as a professor and a mother of two, I believe that women and girls matter,” Zahnd said. “Many of the issues tackled at the rally directly affect my students. I wanted to show both my students and my kids how important it is to be involved in our democracy, from voting, to campaigning, to speaking up for one’s beliefs, no matter where they lie on the political spectrum.”

Zahnd said she has always been a women’s rights advocate.

“I am raising my daughter to be a strong person and my son to respect girls as their equals,” Zahnd said. “I want both my male and female advisees at Francis Marion to succeed in their studies and careers.”

“The women’s march confirmed these core beliefs in a tangible and inspirational way, as women and girls marched alongside one another in an amazing show of solidarity,” Zahnd said.

For Dr. Ann Stoeckmann, professor of biology, going to the march was a chance to stand up for the ongoing fight for women’s rights and make her voice heard.

“With this new administration, I feel like things could go backwards and I want to do what I can to prevent that,” Stoeckmann said.

Stoeckmann said that the event was a mixture of people from all backgrounds.

“I wish I could share the positive energy of the event,” Stoeckmann said. “Different races, religions beliefs standing shoulder to shoulder; Strangers with one common vision – good for all – for democracy.”

After coming back from the march, Stoeckmann said that she is now more aware than she ever has been.

“I can’t be quiet anymore,” Stoeckmann said. “I will be more involved and encourage other to take action and get involved. We need to think globally and act locally.”

Action Together – Pee Dee is continuing to actively stand up for women’s rights.

One member of the Action Together – Pee Dee organization, Kay Packett, a mass communication, professor hopes to see the group have an influence on government policy.

“First I hope we can mobilize in support of the issues we care about – education, climate change, and equal rights — and just as important against actions that we believe are not in line with our values as Americans,” Kay Packett said. “I hope we’ll make our voices heard at every level of government.”

Packett also said she hopes to see the organization have an impact on the local community.

“Second, I hope we’ll practice what we believe right here in this community to make it a better place,” Packett said. “I hope we’ll set an example of unity and active kindness that will help us move closer to the community we want for ourselves and our children.”

Next, the group will participate in the “10 Actions/100 Days” campaign, which consists of 10 actions to be carried out for the first 100 days of the presidency. For the first action, individuals will write postcards to state legislators about women’s rights issues, such as the possible defunding of 24 Violence Against Women grant programs the current administration has vowed to defund.