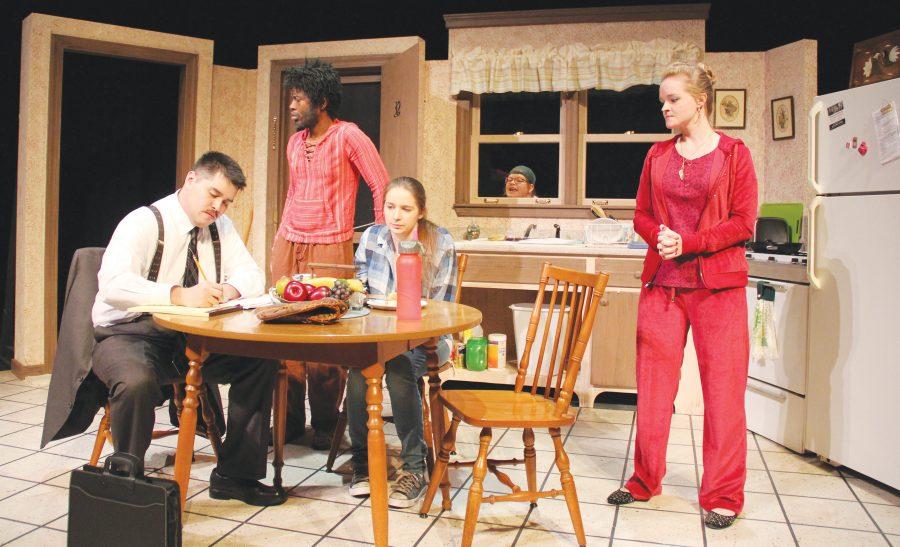 FMU Theatre Program performs the play “Blue Bird” with playwright Liza Lentini in attendance. After the play, actors and the playwright host a talk back on opening night.

Members of the FMU Theatre Program performed the play “Blue Bird” by playwright Liza Lentini on Feb. 15-18. The play is centered on the subject of sexual assault, specifically rape that occurs in the military.

“Blue Bird” follows the family of single mother DeDe Foster and her two daughters, Kate and Amy, as hidden secrets about sexual assault are revealed through the arrival of an unknown visitor and the unfolding of events that follow. The play tackled issues surrounding sexual assault, war and the culture that demands perfection over truth.

In the playbill, Larsen said she chose the play because of the character Kate’s strength and her growth throughout the play as well as the important themes of the play.

“I believe theatre should inspire passionate discussion of issues and a motivation to action,” Larsen said. “The play is much more complex than it first appeared. I had no idea, until we were well into rehearsal, that the play would be so timely.”

Lentini said that when she wrote “Blue Bird” she expected the play become a part of history after 10 years rather than reflect serious cultural issues. She said she views the play today as more relevant than ever.

“Although this play’s inciting instrument is the military, it isn’t about just that,” Lentini said. “This play is about a girl who stands against a big bully, and that can be any institution. Any where at any time there are plenty of bullies in power so it’s a universal message that I believe is really relevant right now.”

Larsen said that she wanted the theater students to get the unique experience of working with a living playwright. Although Lentini was unable to actively participate in the Theatre Program’s preparations for “Blue Bird” due to a shoulder injury, she attended the opening night performance.

Lentini said that she was grateful in a sense that she could not participate in the preparations of the play.

She said seeing it without knowing what to expect showed her new sides to her work.

“I think one of the best things about being a playwright is you’ll get to see all different interpretations of your work,” Lentini said. “I’ve been doing this long enough that I don’t hold on to my vision of what the play should look like. I got to see it with a new set of eyes and hear it with a new set of ears. I relish in and appreciate the interpretation that the director and the actors bring to the stage.”

Lentini, Larsen and the cast participated in a talkback discussion following the performance in which they answered audience members’ questions and shared their thoughts on the play.

During the talkback, Lentini said that she chose the title “Blue Bird” because blue birds represent freedom and are both territorial and nurturing. Lentini said the blue bird, which hits a window during the play and broke its neck, is symbolic of the character Kate who has experienced sexual assault but then gains the strength to tell the truth.

“Kate really is that phoenix rising from the ashes,” Lentini said.

Lentini said she admired Larsen and the cast for tackling the difficult and important subjects in “Blue Bird” and that they handled it well.

Lentini said she tends to write her plays in an absurdist realism style.

“This isn’t meant to be a scene that you would walk into in life although life in itself can be pretty absurd sometimes,” Lentini said. “So if you relate to it and that works for you that’s great. This is definitely a ‘Through the Looking Glass’ portrayal of a very real situation.”

Connor Graham, sophomore biology major, said that the message of the play, to stand against sexual abuse and oppression, is important and should not be ignored.

“As a female, I feel like many people ignore women’s rights, so this play was a horrifying confirmation,” Graham said. “When I realized that Scott was her abuser I was shocked and hurt that a man who raped and beat a woman was not in jail.”

In “Blue Bird,” the character Scott makes a surprise visit to the Foster family home acting as a government party interested in taking Kate’s statement about the sexual assault she experienced as a military officer. By the end of the play Scott reveals himself as one of the three men who assaulted and raped Kate, and threatened her future as well as her sister’s safety.

Lentini said she spoke to FMU students who said that once they realized that Scott was Kate’s abuser they understood hidden signs of this truth that were portrayed through specific language and subtle actions throughout the play.

Lentini said that she believes watching the play for a second time can reveal deeper meanings and truths about the reality of sexual assault because from the beginning the viewer will recognize Scott as a rapist visiting Kate to show his power against her and threaten her all over again.

“There are so many things that are said to her that are threats,” Lentini said. “He comes to that house to take care of business and doesn’t know what he will encounter there. He has one goal and he can’t leave. What seems like benign dialogue is actually Scott threatening her in a colloquial way. Every day words can have an exceptionally threatening meaning.”

Graham said that sexual assault occurs and is hidden from the world in real life just as it was portrayed in the play.

“I was angry that sexual abuse is pushed under the rug,” Graham said. “Sexual assault is real and as a country we need to help the victims and stop the abusers.”