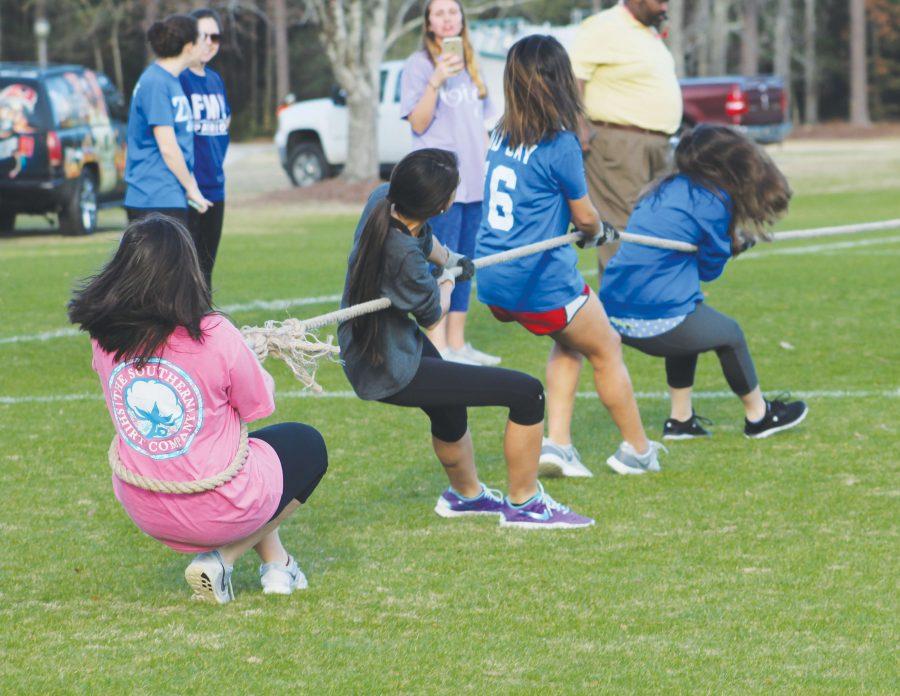 Members of intramural teams compete for points and athletic gear during the Patriot Games. Activities included a water balloon toss, a sack race and a scavenger hunt.

During the week of Homecoming, 50 students participated in the Patriot Games, a series of competitive activities for intramural teams.

Team WildPats won the women’s division of the competition, and team Death Row won the men’s division. In total there were five men’s teams and five women’s teams, and each team had five players.

Director of Recreation Derrick Young said that the Patriot Games is a unique part of Homecoming because it encourages student involvement during the entire week of Homecoming, not just for one day.

“I think people are having a good time out there showing their school pride,” Young said. “I like to see them interacting with one another and doing events they wouldn’t normally do.”

Young also said that the Patriot Games teaches students life skills that they can use after college.

“They have to work as a team,” Young said. ‘Those are skills they need to learn before they get out of here and go to the workforce. They’re going to have to work with other teams.”

This year FMU brought back the scavenger hunt, an event that they have not done for several years. Young provided each team with riddles. Teams had one hour to find Easter eggs hidden on campus and bring them back to the starting point, which was the University Center commons area.

Also, teams who attended the campus bonfire on Feb. 10 and made a banner that displayed their school spirit were awarded points toward their Patriot Games score total.

Participation in the golf cart parade on the official Homecoming day was optional. However, Young said that if there was a tie, the team with the best decorated golf cart would win the Patriot Games.