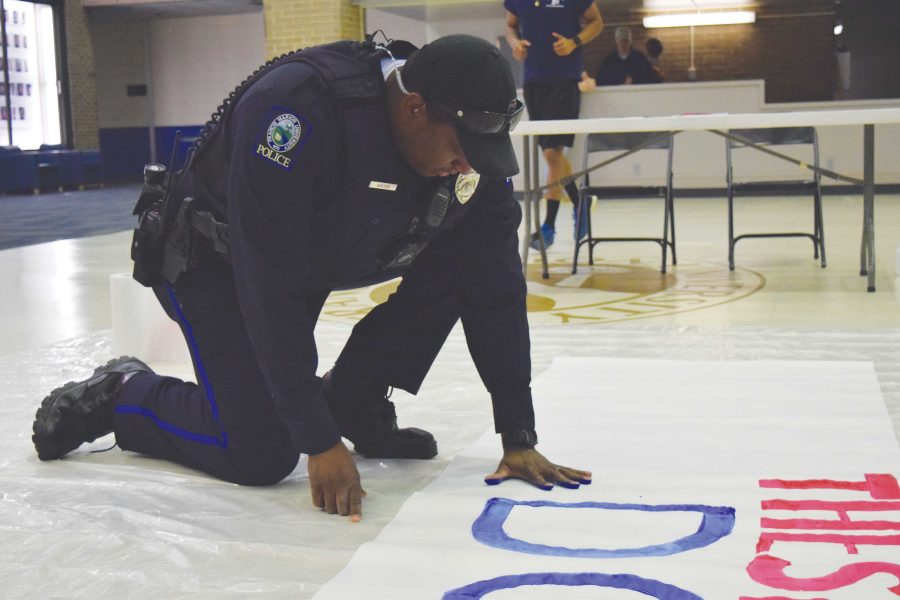 With such a large presence of violence in recent generations, Barfield said he felt it was important to address these issues at FMU.

On Jan. 31 a banner with the words “These Hands Don’t Hurt” written in school colors was placed in the UC. Students who walked into the UC were encouraged to dip their hands in either red or blue paint and mark their handprints on the banner to symbolize their support of anti-violence.

This is the first time the demonstration has been held on campus. Barfield said he hopes that when people view the banner covered in student handprints they will see that FMU as a whole is against violence.

“Our student body as a whole is coming out here to show they are against all types of violence,” Barfield said.

Many students came through the UC and participated in the event, putting their individual marks on the banner. Montu Patel, sophomore computer science major, said he was happy to get his hands a little dirty to stand up against violence. For him, the violent action he wanted to stand up against was child abuse.

“Child abuse occurs all around us, especially in lower income communities like Florence,” Patel said. “It’s important we stand up against violence towards children.”

Along with students, members of FMU faculty and staff also placed their hands on the banner. Officer Leonza Carter and Sgt. Christopher Moore of the FMU Police Department said they were happy to show their support of this anti-violence campaign. They explained that it is important for students to know that they are against violence and will not tolerate violent acts on campus.

“If you come on this campus, you have the right to be safe,” Moore said.

The event was designed to show that college students need to stand up against violence and lead the younger generation to do so as well. FMU also wants to encourage the importance of peace.