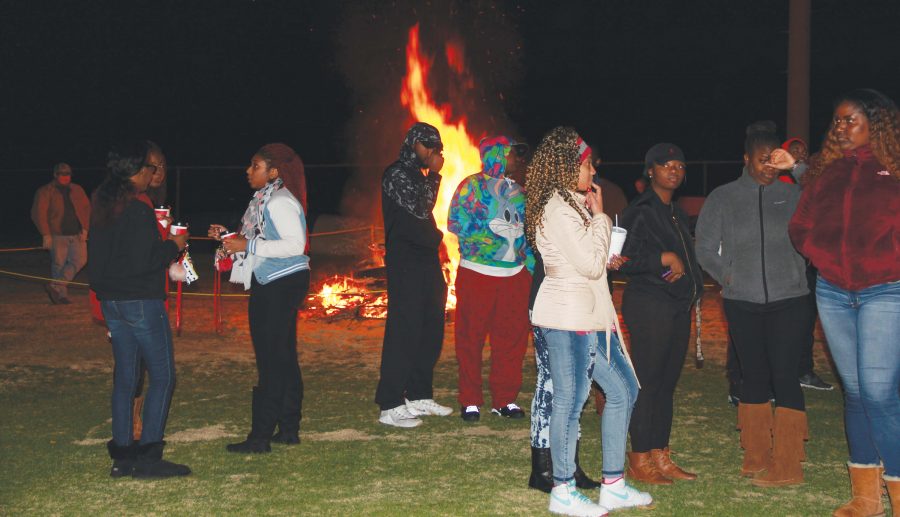 Students enjoy the bonfire and pep rally the night before Homecoming. The event featured door prizes, s’mores, hot chocolate and other festivities to help the FMU community get excited for Homecoming

FMU reinstated a former tradition during the 2017 Homecoming. A bonfire and pep rally was held behind the Smith University Center with the purpose of inspiring energy and spirit before the Homecoming basketball games against Flagler College began.

The bonfire featured door prizes, a s’mores table and hot chocolate. The coaches for both the men’s and women’s basketball teams came out to introduce the players and pump up the crowd.

FMU athletes from other teams, such as the men’s and women’s soccer teams and tennis teams and the softball team and volleyball team, attended the bonfire to support their fellow Patriots. Performances by the Dimensions of Diversity Dance Team and others were held during the bonfire. Presentation of the Homecoming Court also occurred during the event.

Multiple teams that were participating in the intramural Patriot Games created banners designed to show school spirit. Many of the teams were in attendance, including “The Dream Team,” the BCM team, and the ladies representing Zeta Tau Alpha Sorority.

Elijah Moton, 2017 Homecoming King, said he enjoyed the event and hoped it would become a tradition during FMU Homecoming.

“This is such a great idea, and I feel it’s really bringing students together,” Moton said.

FMU Student Government Association (SGA) had the inspiration to bring back the bonfire, an event which has been held at Homecomings in the past.

“It’s something that has been done in the past, and SGA wanted to bring it back,” Assistant Dean of Students Daphne Carter-McCants said.

Carter-McCants also said that the bonfire tradition ties into the purpose of Homecoming, which is not only for current students.

“Homecoming is all about the alumni of Francis Marion University ‘coming home’ to their alma mater, reminiscing about their individual college experiences, catching up with old classmates and cheering on their Patriots again,” Carter-McCants said. “Bringing this event back was really focused on the tradition that students and alumni of FMU really hold dear.”

Fredericka Presley, SGA president, said their goal was not only to have a bonfire for this Homecoming, but to bring back this tradition in the next years as well.

“It’s all about bringing the current students and alumni together through tradition,” Presley said.

Presley said she was overwhelmed by the turnout and said she hopes that this event is one that continues even long after she has graduated and becomes an alumna herself.

The bonfire was also received well by current students, according to sophomore biology major Gabriel Hutson.

“I liked that FMU had more activities the week leading to Homecoming,” Hutson said. “The bonfire and dance were great ways to bring the FMU community together and show their Patriot pride.”