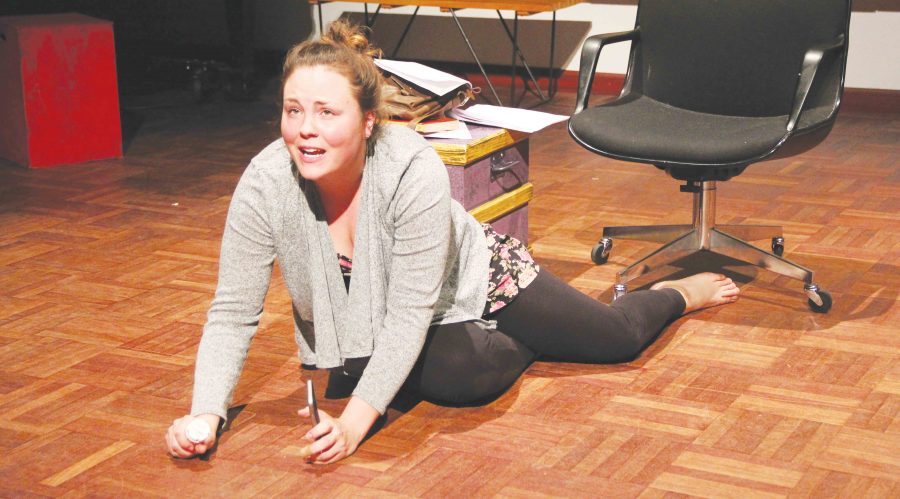 Brooke Mogy, a recent FMU graduate, performs in “Carousel” as Arabella during a 10-minute play.

The FMU Patriot Players hosted the third annual 24- hour play festival in which students write, cast, rehearse and perform original plays all in the span of one day.

The event kicked off at 7:30 p.m. on Friday, Feb. 24. At this time, the four students who had previously volunteered to be playwrights were given the theme for this year’s festival: teenagers and technology. Each playwright was given a director and stage manager. Then, volunteer actors auditioned. After the auditions, the playwrights, directors and stage managers decided who they wanted and deliberated until each team had the necessary actors.

Mitchell Aldaco, a senior English liberal arts major and one of the playwrights, joked about the actor selection process.

“We fought for them,” Aldaco said. “There were steel chairs. We kicked some balls in.”

From this point, writers were free to begin writing original 10-minute plays that were in some way related to the theme.

At 7:30 a.m. Saturday morning playwrights who had been writing through the night turned their newly created plays over to the students that were directing the play. Actors and directors were given 12 hours to memorize and rehearse the play.

The plays were performed on Saturday at 7:30 p.m. in the Kassab Recital Hall in the Hyman Fine Arts Center.

The first play performed was titled “San Francisco Rest Stop,” written by Dani Isgett, a sophomore business marketing major. The play was about a son dealing with issues with his father. “Worth” was the second play and was written by Aldaco.

“Worth” portrayed the internal emotions of overcoming past experiences and giving a new relationship a try.

Christina Xan, a senior English liberal arts major, wrote the third play titled “Carousel.” This play was about a girl making one last phone call to her long-time boyfriend before taking her own life.

“Carousel” was directed by Abby Greenwood, who is 13-years-old and attends Trinity-Byrnes Collegiate School. She directed a play last year as well.

“This was my third time, and it was frantic and crazy but was really fun,” Greenwood said. “I was pleased with the play I got because, at 13, no one takes you seriously, and doing a crazy serious play that deals with suicide is going to look really good and is good experience.”

The last play was called “Like Us” and was written by Rebecca Prohaska, a senior theatre major. “Like Us” portrayed a girl in therapy coming to the realization that she killed her abusive father.

After having his play performed not even a full day after writing it, Aldaco said he was pleased with the end result.

On the other hand, the actors had to memorize the written script they were given in 12 hours. Joy Price, junior early childhood education major and one of the actors in “Worth,” said she had fun acting.

“When I got the script and I stared reading it, I was like, ‘Wow, this is amazing, and it’s a really good story,’” Price said. “I was very intimidated by the vast amount of words, but, at the same time, I was flattered that he thought I could handle this.”

After the performance of all four plays, there was a talk back portion, where directors were able to discuss their processes of bringing the plays from paper to stage in so little time.

Jaylin Suther, senior psychology major and audience member at the play festival, expressed appreciation for the work and the complete performance.

“They were great considering the time constraints they had,” Suther said. “They couldn’t have done it any better. The theme of teens and technology, I think it really drove home things that the audience was able to relate to.”