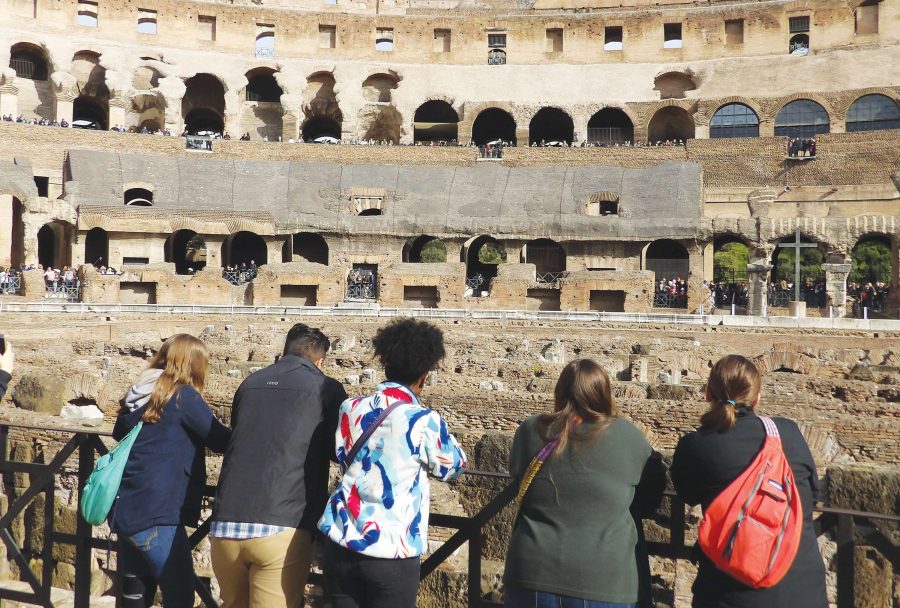 FMU Honors Ambassadors and McNair Scholars traveled to Italy during spring break, visiting landmarks such as the Coliseum and the Vatican.

The Honors Ambassadors were Caroline Granger, a senior chemistry major; Rachel Droze, a sophomore mass communication major; and Anna Patton, a sophomore English secondary education major. These students were selected through an application process. During the application process, GPA, student involvement and honors credit hours were among the considered qualifications of the students who applied. Typically, these Honors Ambassadors travel abroad during spring break to current and potential exchange partners with FMU.

These two trips usually happen separately with both of the groups traveling to two different destinations. However, this year the trips were combined.

“The honors students were not visiting one of our exchange partners but were more so tourists than they typically are,” Dr. Jon Tuttle, professor of English and director of the honors program, said. “In this case, we had no Italian exchange partners. The president decided that FMU students needed to see Italy. Italy is one place that we have never sent our Ambassadors before. For that reason, he decided to lump them all together on the same trip so they could have all the same experiences.”

According to Tuttle, it is unclear whether these trips will continue to be combined in the future. Driggers said that she enjoyed having the Honors Ambassadors travel with the McNair Scholars and that having them there added another depth to the experience.

“They were wonderful people, and I think it added an extra experience of getting to see where you could be,” Driggers said. “It was very inspiring.”

The Ambassadors and McNair students flew into Rome, Italy, where they walked 14 miles during their first day. They remained in Rome for a few days, then took a train to Florence. This served as a base city, from which the group of students took day trips to Siena and Pisa. The last day was a free day that the students intended to use to go to the beach, but, due to train mix-ups, they spent the whole day on trains instead.

According to Granger, this trip was an enhancement to her college experience.

“This trip enriched my college career by allowing me to see and experience monuments and people, like the Pope, that I never thought I would have the chance to do,” Granger said. “It also allowed me to gain more practical skills, such as navigating through a city and communication with others more effectively.”

Patton described how the trip to Italy had a lasting impression on her.

“This trip impacted me in several ways,” Patton said. “However, one of the biggest ways I was affected was by the language barrier. The importance of learning a second language is now clear to me. I plan on focusing on my foreign language studies.”

“Traveling is a great way to make friends,” Driggers said. “You are with someone 24/7 in another country, lost and trying to find your way around with different languages, and anyone who wants that should definitely look into it.”