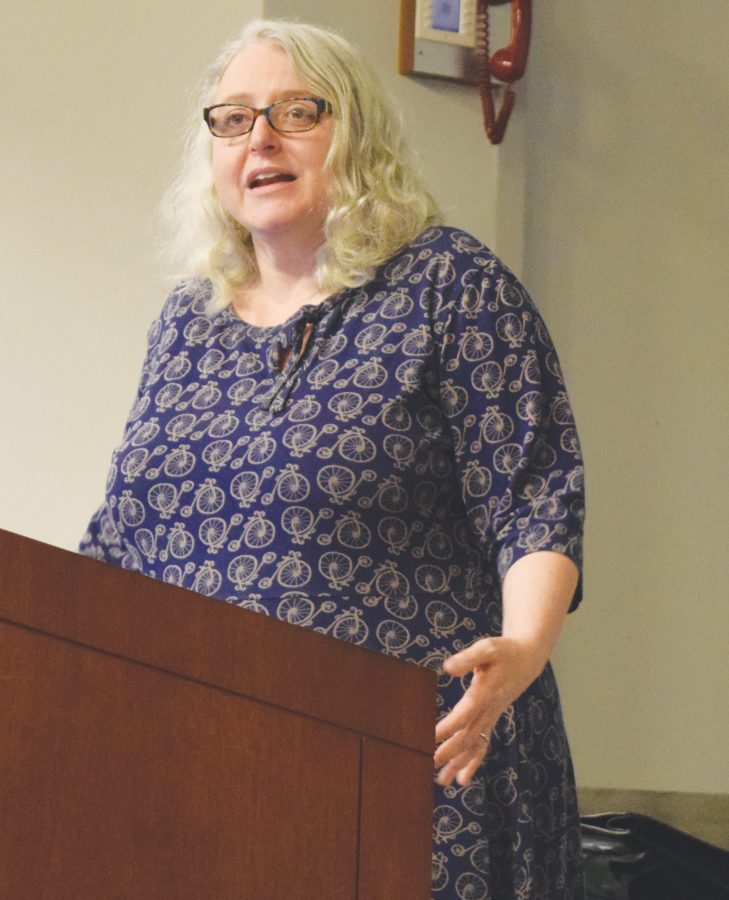 Sarah Einstein, author and professor of creative writing at the University of Tennessee at Chattanooga, visited FMU to give the annual Hunter Chair in English Literature and Gender Studies lecture (Hunter Lecture). She centered her lecture on her book titled “Mot: A Memoir” and the political and moral issues involved.

The lecture was held in Lowrimore Auditorium on March 7, with a reception and book signing immediately following.

Einstein began the Hunter Lecture by describing her motivation to write. She said she was newly married and working as the director of a shelter for the mentally ill. However, she was also experiencing disillusionment with this job, feeling as if she was not the right person for it.

One day at the shelter, Einstein said she met an elderly, mentally ill veteran named Mot. With tension in her marriage and bad experiences in her job, Einstein said she decided to take a major risk—she quit her job to follow Mot around for a week.

Einstein said that her book actually came about in an indirect way: she claimed she was planning to write a book about Mot as an excuse to observe him without being questioned by her family.

She took extensive, cautious notes during her time with him because her husband would check to be sure she was not lying. After her time with Mot was up, Einstein said she had done so much of the research for her book that she decided to actually write it.

“I had all these notes and had done all this work, and I just decided to actually do something with it,” Einstein said. “The end result turned out to be the book that was just an excuse at first.”

“The powerful thing about creative nonfiction, or one of the powerful things, is that it’s true,” Einstein said. “Everything in the book is true, but I get to tell it from a first person perspective and share how it made me feel. It gives readers a more personal way of hearing true stories.”

Einstein said that one of the impactful aspects of her experience observing Mot was getting to see firsthand the issues homeless people face. Although she had previously worked at the shelter, she said that knowing about the issues and observing them are very different.

One story she told during the lecture was about a time when Mot went to the hospital. She realized during this hospital visit that Mot had been using hose as a makeshift catheter because he did not have access to the healthcare he needed. She said Mot was afraid of going back to the veteran hospital because he had been escorted out due to behavior related to his mental illness.

“I was shocked not only that Mot felt he was better off doing this than trying to get proper medical care but also the way the nurses treated him at this hospital,” Einstein said.

Einstein said she was so frustrated with the lack of health care opportunities for Mot that she decided to take a handful of catheters from the supply closet at the hospital. She said she stuck them in her purse so at least for a few days, Mot would have a catheter supply and less pain.

Near the end of the lecture, Einstein took some time to share statistics of homeless veterans as a whole. She explained the difficulty they often experience because the majority of the safeguards in place apply to women, children or families.

Her advice for students who want to make a difference in the lives of the homeless is to examine candidates running for office for their stances on these issues. She believes that real change starts on the policy level and encouraged students to be active and aware of their area’s policies.