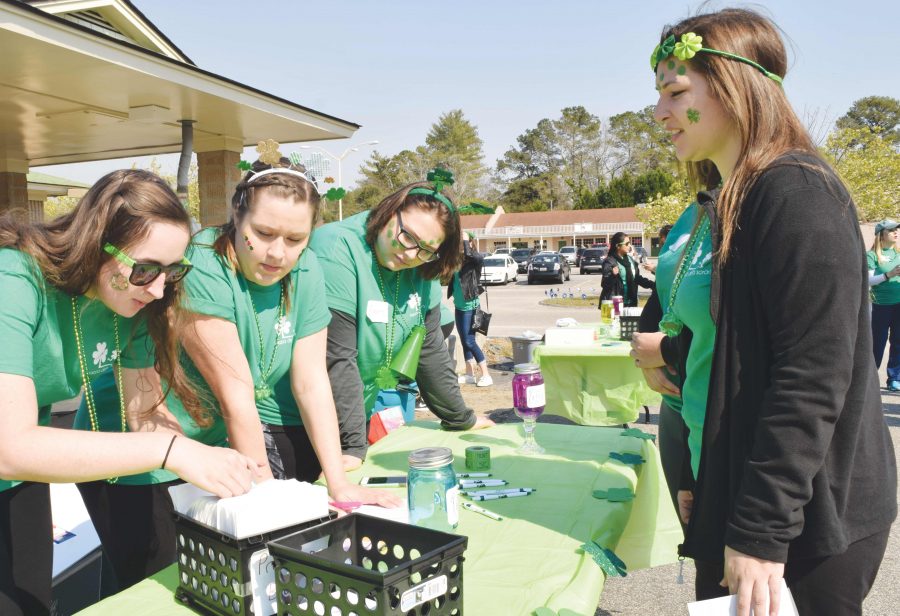 KD members work at the registration booth during the March 4 5K. Proceeds were donated to the Durant Children’s Center and National Prevent Child Abuse America.

Runners supported local and national charities for the prevention of child abuse while competing for medals in the annual Shamrock 5K organized by Kappa Delta (KD). Sophomore pre-nursing major Jessica Pollard was in charge of organizing the 5K and delegated tasks to all of the volunteers at the race. She led the planning of the race and worked closely with other members of KD.

At the event’s sign-in, runners received a t-shirt, a drawstring bag and coupons to local sponsors for the race, including McDonald’s and Rita’s Italian Ice. KD also distributed brochures explaining the philanthropies that runners were supporting by participating in the race. The sign-in tables were open for two hours before the race began at 4:30. This gave runners time to enjoy a snack from Rita’s Italian Ice and prepare for the race.

KD made child abuse prevention their philanthropy in 1981, and FMU’s chapter continues to raise funds each semester to donate money to NPCAA. The organization is the most widely recognized resource for the prevention of child abuse. KD’s local philanthropy location, Durant Children’s Center, also provides care for abused children through counseling and assistance in escaping the abusive situation. KD became involved with the Durant Children’s Center 19 years ago, and they have made annual donations to the charity ever since.

KD chose NPCAA as its philanthropy both because it adheres to their concern for caring for children and because it was founded by a KD sister, Donna Stone. Nationwide, KD has donated over 21 million dollars to NPCAA through charity events and Shamrock fundraisers. Shamrock events are not unique to FMU; most KD chapters host some kind of Shamrock event for their community to help support their philanthropy.

The race had 168 participants of all age ranges, from kids 12 years old and under to adults 50 years and over. The track began near Second Loop Road through a local neighborhood. Runners were encouraged to wear green and come in festive St. Patrick’s Day attire, and many runners brought their dogs. At the finish line, each participant’s picture was taken and is available online under the same website used for registration.

Junior biology major Gavin McAbee, a new member of Kappa Delta, decided at the last minute to participate in the 5K race.

“The most memorable part of Shamrock, for me, was just the fact that I completed it and nonetheless came in fourth place in my division, because I had not planned nor trained to do it,” McAbee said. “I decided five minutes before the race to run it.”

After the race, snacks and beverages were available for runners, and a raffle was held for various prizes such as movie tickets. Pollard announced the winners of each age group and the overall fastest male and female runners.

Frankie Humphrey, a frequent racer in local charity runs, earned the fastest time, reaching the finish line in just over 20 minutes. Marlene Alvarado was the first female to cross the finish line in 26 minutes. Melissa Mahoney claimed a close second, finishing only ten seconds behind Alvarado. Winners were each given medals by KD sisters in front of the crowd.

Times for each runner were recorded and are listed along with finish line photos on the same website used for registration.