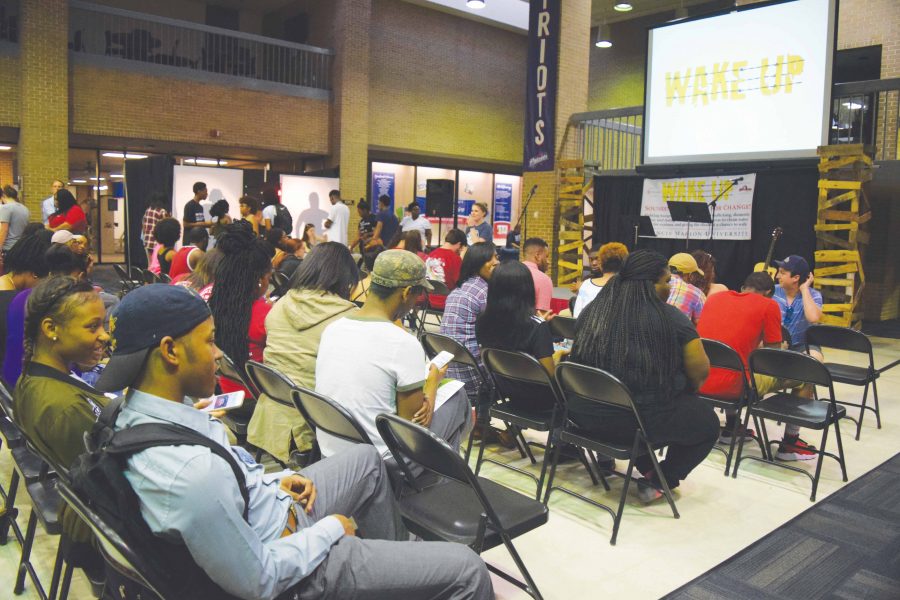 Students gather in the UC Commons during the WakeUp event to learn about social issues that affect people globally such as world hunger, clean water and sex trafficking.

Students visited interactive booths on April 4 in the Smith University Center to learn more about each cause and how they could get involved.

The Baptist Collegiate Ministry (BCM) was the sponsoring organization for WakeUp. BCM campus minister Kendal Danford said that planning for the event started in January, and the interactive element was key to the event’s success.

“Instead of it being a transfer of information, we wanted attendees to have some sort of interactive experience,” Danford said.

InterVarsity was another organization with a booth at WakeUp. The cause that the organization highlighted was domestic violence, and the group partnered with a representative from CARE House of the Pee Dee and students who recently produced a movie, “Glass,” about domestic abuse.

InterVarsity member and senior English professional writing major Christopher Hutchinson said that the purpose of the interactive portion of their table was for attendees to bring darkness to light.

“We wanted to create an opportunity for people to be aware of the issue and for people who have experienced it to maybe open their hearts up a little and let some light in,” Hutchinson said.

To share their stories, people wrote their experiences with domestic violence on Post-it Notes and pinned them to a wall.

“The wounds that domestic violence brings are not able to heal if they’re not brought into the light,” Hutchinson said. “The goal was for people who have been affected by domestic violence in some way to shine some light and get that story out, whatever that looks like. It might look like, ‘Abuser, you don’t have control over

me anymore;’ ‘Your actions don’t define me;’ or ‘You’ll get through this.’”

The event included live music featuring songs about social change such as “Waiting on the World to Change” and “Man in the Mirror.” Also, a video about each social issue was played, and students were encouraged to get involved in a cause that they are passionate about.

Senior pre-nursing major Tierra Scarborough said that because of an interactive booth at WakeUp about orphans, she now wants to get more involved with caring for orphans.

“I could almost feel the pain of the children not being cared for,” Scarborough said. “It was powerful to know that even though we take a lot of stuff for granted, there are still a lot of people who are not able to even start out life the right way.”

for orphans. However, she said that WakeUp showed her that, even as a college student, she can donate small amounts or volunteer to causes she cares about.

“Doing small things now that are meaningful will help me know more about the cause,” Scarborough said. “Then, when I do have money to do more or when I do have the ability to travel and help that cause, I will be ready.”

To conclude the event, two representatives from Lighthouse for Life, a non-profit organization working toward ending sex trafficking, spoke about the issue.