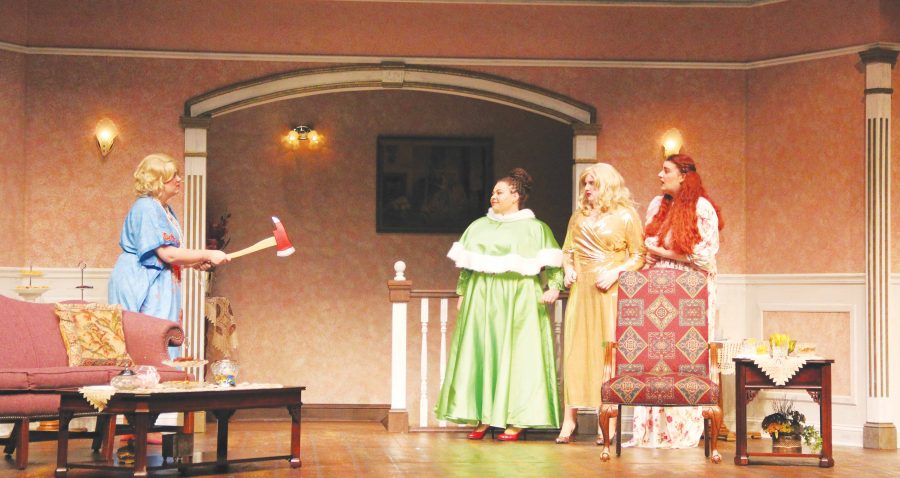 The all-female cast of “Always A Bridesmaid” includes students who are normally behind the scenes. However, the cast not only performed the play, they also built the set and worked on the technical side as well.

Members of the FMU Theatre Program performed the play “Always a Bridesmaid” by playwrights Jessie Jones, Nicholas Hope and Jamie Wooten at 7:30 p.m. on April 13-15. The play is a comedy centered on the themes of weddings and friendship.

Professor of Theatre Arts Glen Gourley directed the production of “Always a Bridesmaid.” It took place in the Fine Arts Theatre in the Hyman Fine Arts Center on FMU’s main campus.

“Always a Bridesmaid” follows the relationship of high school friends Libby Ruth Ames, Monette Gentry, Charlie Collins and Deedra Wingate over a seven-year period. During the play, the audience saw the friends continually come together at their dream wedding venue, Laurelton Oaks, as bridesmaids in each of their weddings. The friends made a promise to each other in high school that they would be bridesmaids in each friend’s wedding no matter what.

According to the playwrights’ website, the play asks the question, “Just how far are you willing to go to keep a promise to a friend?” As they experience cold feet, infidelity and one friend’s many weddings, the friends test one another’s patience and the limits of friendship.

The women in this cast included Rebecca Prohaska, Emily Bochette and Ilia Campbell among others, each of whom are typically backstage workers. They not only acted in the play, but worked in the FMU scene shop to build the set and prepare for the performance in technical aspects as well as learn their lines.

This was Prohaska’s first time acting in front of a full audience, and it taught her not just about acting but about her technical roles in theater as well.

“This was a completely new adventure for me, and I am thankful for the opportunity,” Prohaska said. I was once told by one of my professors that you cannot properly do your own job until you understand what it is like to do someone else’s and this was my chance to do that.”

For Prohaska, the experience was bittersweet. She was excited to perform in an all women cast, and to be in a play directed by Gourley. She also identified with her character, Libby Ruth, because she is a hopeless romantic and the mom of her friend group just like the character. However, this was her last semester, and thus her last play, as an FMU student. She said performing in “Always a Bridesmaid” is one of her favorite memories from her time at FMU.

Although this was not Campbell’s first time acting, it was her largest role at FMU. She said she enjoys acting in comedies the most because you get to focus more on being funny and getting timing right rather than emotion.

“I haven’t done any acting at FMU since we performed ‘The Tempest’ because I’ve been working on my design and technical skills,” Campbell said. “Even in the plays I have been a part of, I didn’t take a major role like I did in ‘Always a Bridesmaid.’ I love acting in comedies because they are so much fun.”

“Always a Bridesmaid” is also the last play that Professor of Theatre Arts David Granath will be a part of as FMU faculty. He began work as the resident scenic and lighting designer at FMU 30 years ago, and has worked as technical director for most plays since that time.

A special insert was included in the playbill to describe Granath’s career at FMU. According to this insert, Granath has taught more than 100 courses at FMU and has been present for every performance in his thirty-year career.