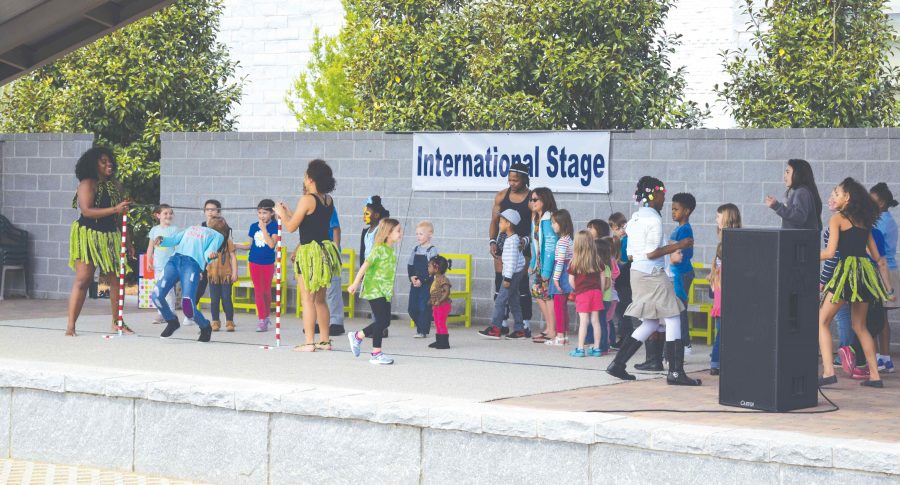 At Arts International, musicians and entertainers from around the world perform throughout the day such as the Kenya Safari Acrobats, the Accidentals and Walhalla Bavarian Dancers.

Arts International was held at the FMU Performing Arts Center on Saturday, April 8 with different vendors and performers displaying diversity and culture to attendees. The festival was held where South Dargan Street and Cheves Street meet.

An international flag display exhibited a variety of flags from different countries. A picnic area was also available for people to sit and watch the entertainers perform.

There were several different children’s activities offered. The children were able to create crafts that taught them about other continents. Some of the activities included balloon art from a Boy Scout troop and face painting using international designs. Other activities for the kids included learning about STEM and robotics, and playing with Japanese yo-yos. They were also able to make their own passports and then have them stamped when they went to different displays by exchange students.

The international food court offered a variety of foods from all over the world. Some countries featured at the food court were: Italy, Japan, India, and Mexico and the U.S. Some foods from the U.S. included shaved ice, funnel cakes and the famous barbecue from Wholly Smokin’ from right here in Florence. Other foods included tacos and bratwursts.

There was a beer garden near the concert stage. Dolce Vita, a wine and chocolate shop, was also present at the festival.

The Accidentals performed with Paolo Gualdi, a professor at FMU.

Florence Darlington Technical College hosted a welding sculpture competition where people could watch welders complete their sculptures throughout the day. Rebecca Howle, a sophomore history major, said this was a good event to learn about culture around the world.

“I really enjoyed myself,” Howle said. “I was able to get out and meet some new people around Florence. Most importantly, I was able to learn about different traditions around the world that I had not been exposed to yet.”