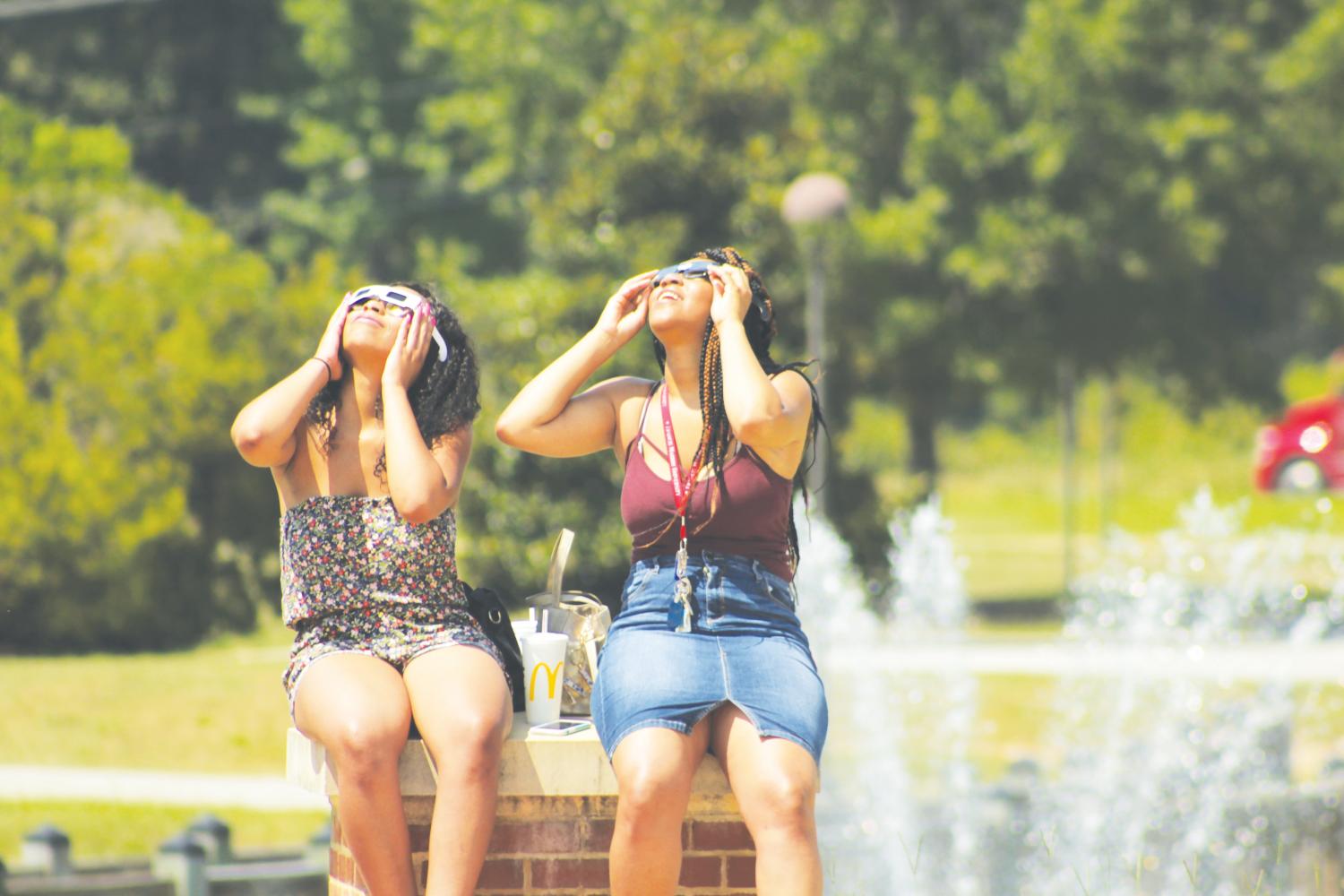 FMU hosted three events to celebrate the Aug. 21 solar eclipse that occurred throughout the U.S. and had above 99 percent totality in Florence. The largest event was a solar eclipse viewing party held at the Griffin Athletic Complex.

Dr. Jeannette Myers, professor of astronomy and director of Dooley Planetarium, was inspired to organize the solar eclipse viewing due to both her love of astronomy and her concern for public safety during the eclipse.

“One of my big reasons for planning this is because it is not safe to look at the sun,” Myers said. “Solar eclipses are very rare events, and there has not been one in South Carolina for awhile. There is a whole generation of children who are seeing an eclipse for the first time. Safety is very important.”

Myers said that because of these safety concerns, FMU obtained 4,000 pairs of eclipse-viewing glasses to give to attendees. She said they did not give out any glasses prior to the event because it is not only important to have the glasses, but to also wear and use them properly. For example, according to Myers, it is unsafe to look at the sun for more than three minutes at a time with the glasses, and 10-minute breaks should be taken between each viewing.

FMU provided multiple activities for attendees to participate in while waiting for the eclipse to begin.

Senior biology and chemistry student volunteer Amanda Wagner passed out bracelets made from beads that turn colors when exposed to ultraviolet light.

There was a “children’s area” where children made masks from paper plates. According to Myers, the masks were more than a fun craft to keep the children busy; she said they were designed to keep eclipse glasses properly in place as an added safety measure.

According to Corbin Witt, another student volunteer, the telescopes available for attendees to use were typical telescopes with a solar filter provided for safety, a solar telescope designed specifically for viewing the sun and a telescope with a sun funnel.

Myers said that the telescope with the sun funnel had two important purposes for this event. The first, she said, was so that any individuals with disabilities preventing them from being able to look up towards the sun could view the eclipse from the projection image below the telescope. Myers said the telescope also allowed her to record the eclipse for later viewing.

In addition to numerous faculty and students, volunteers also came from Science South, located in Florence, to assist with numerous tasks. One of those volunteers, Retha Horne, said that she attended the event with her husband, Joe Horne, who brought his camera and a solar filter in order to photograph the eclipse.

Joe Horne said he does not recall a time in which he was not interested in science and nature.

“I’ve always been interested in things like this,” Horne said. “I have seen a solar eclipse and a few lunar eclipses before. I’ve been photographing nature since I was 15, so about 40 years.”

Another couple, Mo and Amy Flint, from Raleigh, N.C., also brought technology for viewing the eclipse. Mo Flint said when he realized their eclipse glasses would not arrive until after the eclipse, he decided to create something that would allow them to view it safely.

Flint said since he already had a spotting scope, he attached a whiteboard to it in a way that allowed it to project the image of the sun onto the whiteboard. He then attached a paper plate to the spotting scope to provide more contrast between the light of the sun’s reflection and the light that the sun provides during the day.

After deciding to view the eclipse at FMU, they found out they would receive eclipse glasses, after all, but still used the spotting scope for additional viewing.

“You get lost in the shadow of the moon,” Mo Flint said. “I don’t think it’ll change our lives, but it sure was fun chasing it.”