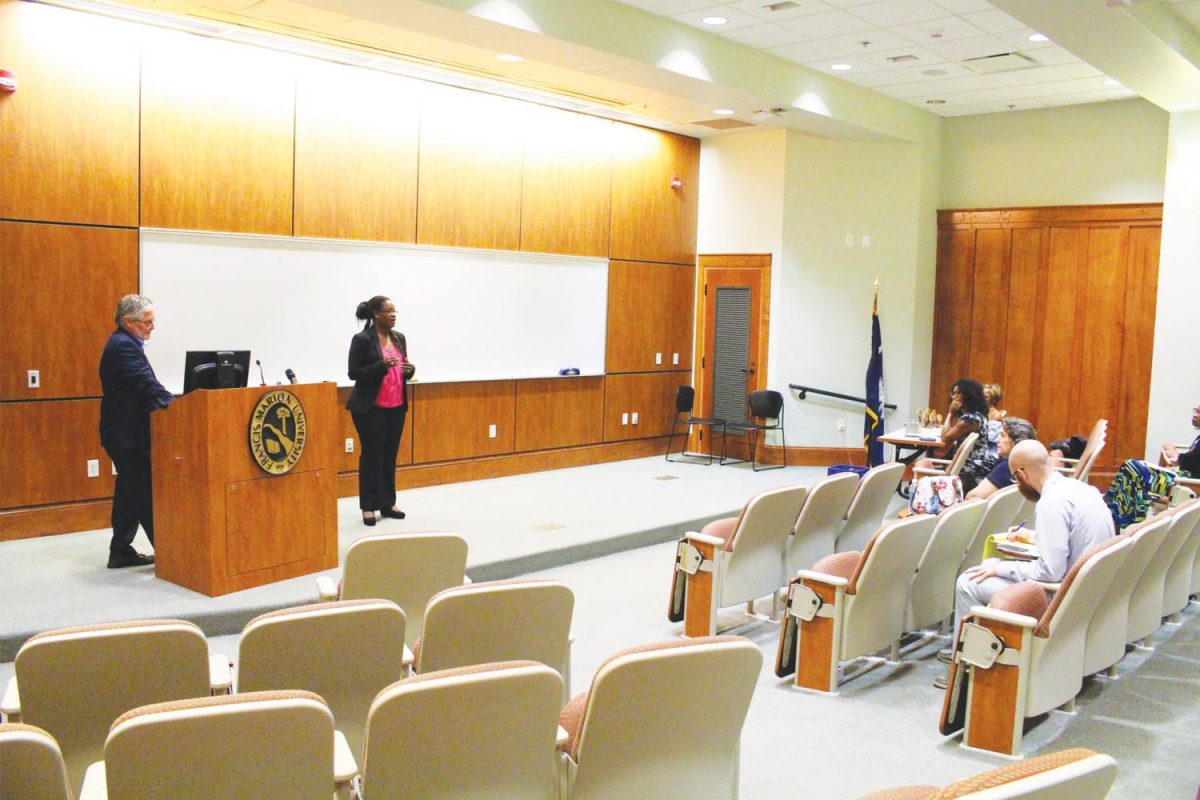 The event, which was comprised of two contests, an evaluation contest and a humorous speech contest.

For the evaluation contest, guest speaker Mari Marlow gave a speech about respecting police, teachers and parents. The contestants, who were given no prior information about the speech’s topic, were judged on their ability to make impromptu critiques on the target speech. Critiques ranged from professional appearance and stage presence to the logical flow of the speech and tonal variation.

In the humorous speech contest, contestants gave rehearsed comical speeches. One speaker, Diana Canaday, received second place for her speech about an experience being mooned while on the job as a regulation specialist.

JoAnn Edmond won the humorous contest with her speech titled “Addiction,” in which she described her cravings for key lime cake and obsession with self-help books.

According Edmond, she has regularly attended Toastmasters meetings for almost a year to prepare for her upcoming doctorate dissertation defense in educational psychology.

Kalendra Thompson, winner of the evaluation speech contest, said she has been a part of the Toastmasters club in Sumter, S.C. for 10 months.

“Before I was in Toastmasters, I had been a fly-by-the-seat-of-my-pants type of girl,” Thompson said. “Having this on my calendar on a daily basis not only helps me as a speaker, but also helps me learn to be committed to a process.”

The contestants for this event came from a variety of backgrounds, ranging from schoolteachers to engineers.

According to Eric Snyder, Division E director, a large range of professional fields are represented in Toastmasters, but about 50 percent of club members hold at least graduate degrees.

Snyder said the division covers most of the Pee Dee region and has one club in the midlands. Each contestant was chosen to represent his or her club either by selection or by winning a previous contest.

The winners of the Division E contest will have the opportunity to compete at the District 58 competition in Columbia, S.C.

According to the Toastmasters website, the organization promotes leadership through developing communication, and these contests are held to give speakers an opportunity to improve their speaking ability and to educate audiences through observing more proficient speakers.

Mari Marlowe, president of GE Healthcare’s club in Florence, spoke during the evaluation portion of the contest. She said being a part of Toastmasters and attending events can be beneficial for many people.

“I started coming to the clubs and it was a lot of fun,” Marlowe said. “I think getting people more comfortable with speaking is always good.”

Recently, District 58 has begun chartering Toastmaster clubs for prisons, according to District 58 Director Dana Swarner. She said by giving speeches at prisons, club members can have a positive impact on the lives of others.

“What we’ve found is this changes the lives of inmates and it changes the entire atmosphere in the correctional facilities,” Swarner said.