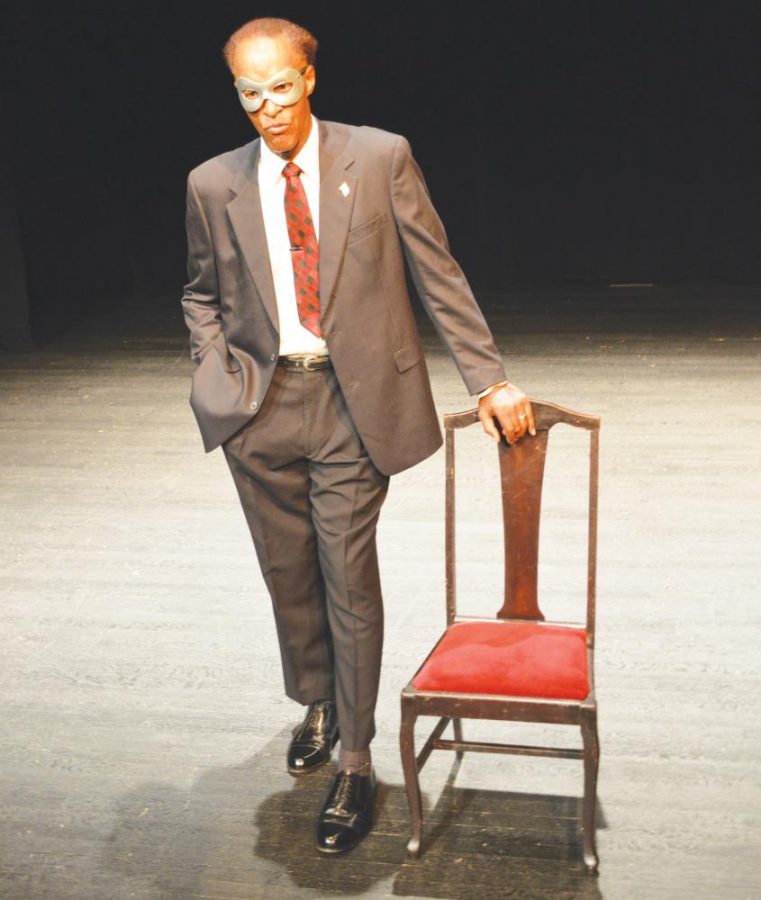 Cedric Liqueur acts as famous lawyer Clarence Darrow. The audience plays the silent role of jury during the one-man show.

Approximately 12 people sat in the Black Box Theater as Liqueur gave his performance. According to Liqueur, this was the first time he performed “Clarence Darrow” in front of an audience.

Liqueur primarily performs Shakespeare’s plays and taking on the role of a Midwestern lawyer from the late 19th century was a much different role than he was used to, he said.

Liqueur entered the stage in a suit with baggy pants and a neck-tie that only reached his stomach. During the performance Liqueur, as Darrow, said he never spent an excessive amount of money on clothes.

The stage was set with one desk, a few books and papers and a single chair. For the most part, Liqueur stood and paced back and forth while recounting the life of Darrow and acting out court room performances.

Liqueur began acting out court cases. He addressed the audience as the jury and leaned over the seats, getting less than a foot from some members as he recounted evidence and presented arguments.

Liqueur delivered the first parts of Darrow’s life, childhood and work before studying law in a whisper and tapped his foot in between almost every word with his hands held behind his back. As the performance progressed into Darrow’s life as a lawyer, Liqueur took on a more commanding tone, waving his hands in exclamation.

While defending his clients, Liqueur would shout and point his finger at the audience, usually demanding they find the defendants not guilty.

Throughout the play, Darrow defends labor workers from their bosses but mostly defended murderers. Most of the cases end with Darrow’s clients being aquitted, but even when Darrow realizes his clients are guilty, he was usually able to keep them off of death row.

Near the end of the performance, Liqueur performed one of Darrow’s more famous cases, the defense of Nathan Leopold and Richard Loeb, two men accused of killing a young boy. He delivered parts of Darrow’s winning defense, pleading for a judge to spare the lives of Leopold and Loeb.

Liqueur, who is African-American, wore a silver mask throughout the performance as part of his transformation into Darrow, who was white. According to Liqueur, “Clarence Darrow” is only the second play in which he has worn a mask.

After the performance, Liqueur transitioned from character to actor and removed his mask and embraced members of the audience for handshakes, hugs and congratulations.

Darrow was a principled person, but Liqueur said he does not think he has been personally affected by learning this play, at least not yet. Usually, he said he notices the effects of performing a certain character after he has moved past a performance.

“There are certain parts that touch me when delivering them on stage,” Liqueur said. “It’s different. When you memorize something you internalize it.”