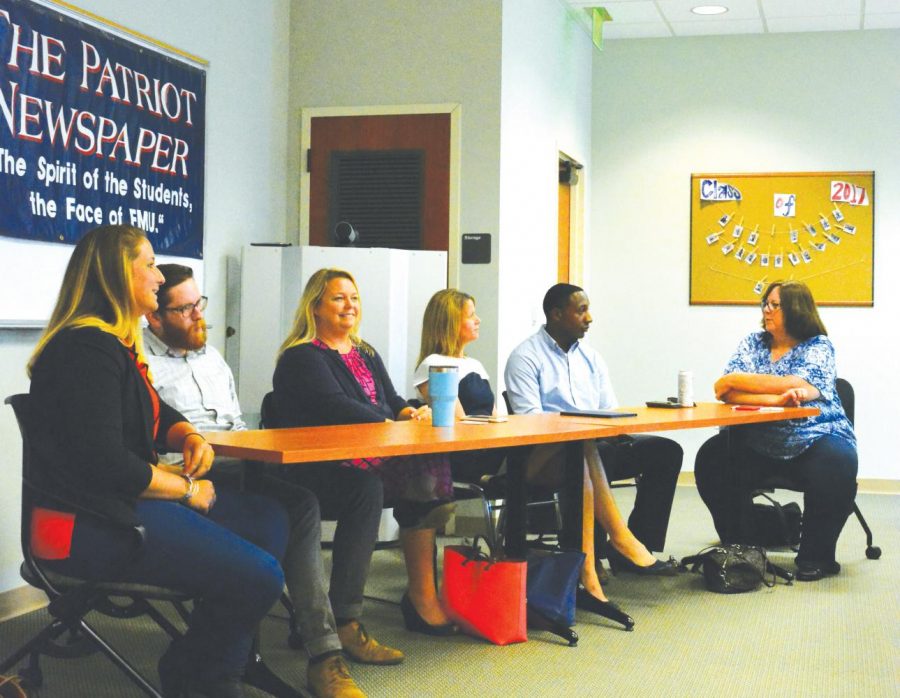 Professors David Baxley and Kay Packett of the Department of Mass Communication organized the panel of six members for the event. Members included two reporters from the Florence “Morning News,”  a news director from WMBF News, a news director from WPDE News, one reporter from WBTW News 13 and the assistant regional director of the Society of Professional Journalists (SPJ).

News Engagement Day is a national event that occurs on the first Tuesday of October to help pique interest in news and journalism. Members of the Association for Education in Journalism and Mass Communication began the event in October 2014.

Throughout the event, students engaged with the journalists and asked them questions about the field. President of SMA Mirella Manilla and Editor-in-Chief of “The Patriot” Lauren Owens moderated questions from the students.

Professors who attended News Engagement Day said the event was a success and that they enjoyed the students’ questions.

“The panel discussion on news and media was the first time we’ve had such an event for our students, and it was amazing to hear our students asking questions of the news professionals on the panel,” Baxley said.

One of the topics the panel members discussed was the public’s tendency to distrust the media. Several panel members said they believe this distrust occurs because people gravitate toward what they believe and typically remember negative stories reported rather than the positive news.

One reporter said rival media outlets often feel the need to be the first to report a story and sometimes don’t take the time to make sure information is accurate before a release. If a news station releases information that is untrue in any way, it loses credibility with its audience.

Sharon Dunten, assistant regional director of SPJ, an organization that tries to build a pipeline for students pursuing journalism by allowing them to converse with professionals in the field, discussed the importance of reporters showcasing themselves as credible sources.

“It is becoming more and more important that we identify ourselves as a good source for information and legitimate news because we’re competing with so much ‘fake news’ and educating people about what journalism is,” Dunten said.

The panelists discussed the role of diversity in the newsroom. The panelists said a newsroom should reflect its community and should reach people of all genders, races, religions and political views.

The panelists also said diversity adds depth to a news story. Having a one-sided story could lead people to believe the organization is biased. According to the panelists, having diverse sources helps ensure that reporters and consumers stay open-minded.

The panelists discussed the long hours that come with being a journalist. They said reporters are always on-call and working to make sure their stories are accurate. All of the panelists said reporting is a difficult but rewarding job.

The panelists said  journalism is rewarding because reporters have thoughtful discussions about a community. According to the panelists, journalism gives people the opportunity to write history, bring change and tell someone’s story. They also said they feel they are making a difference by being able to mentor others and bring problems and accomplishments to light.